Rules of Civility by Amor Towles

On the last night of 1937, twenty-five-year-old Katey Kontent is in a second-rate Greenwich Village jazz bar with her boardinghouse roommate stretching three dollars as far as it will go when Tinker Grey, a handsome banker with royal blue eyes and a tempered smile, happens to sit at the neighboring table. This chance encounter and it's startling consequences propel Katey on a yearlong journey from a Wall Street secretarial pool toward the upper echelons of New York society and the executive suites of Conde Nast - rarefied environs where she will have little to rely on other than a bracing wit and her own brand of cool nerve.

Wooed in turn by a shy, principled multimillionaire and a an irrepressible Upper East Side ne'er do well, befriended by a single-minded widow who is ahead of her time, and challenged by an imperious mentor, Katey experiences firsthand the poise secured by wealth and station and the failed aspirations that reside just below the surface. Even as she waits for circumstances to bring Tinker back into her life, she begins to realize how our most promising choices inevitably lay the groundwork for our regrets.

Readers will quickly fall under the spell of this sophisticated and entertaining novel with its sparkling depiction of New York's social strata, its intricate imagery and themes, its finely crafted unfolding of the unforeseen, and its immensely appealing heroine - a character you will not soon forget.

How can one chance meeting determine the course of your future? Amor Towles explores this question in his debut novel, Rules of Civility. A sophisticated and elegant picture of New York in the late 1930's, this novel will have readers waxing nostalgic for a time when America was on the cusp of discovery. Vividly descriptive, engaging plot, refreshing, original characters, this book has it all!


On the eve of 1938 Katey Kontent is ready to take on the world. She and her roommate Eve Ross are two young women on a mission to make it in New York City, a town that offers opportunity and the realization of dreams. Tinker Grey is a promising young banker, who can introduce them to the upper echelons of society. Becoming fast friends, the three make the rounds in the Upper East Side, meeting everyone from multimillionaires to wannabe's. That one fateful meeting changes Katey's life forever as she struggles to rise above her lower class upbringing to become an editor, re-inventing herself and adapting to the ever-evolving world that New York presents to her. A tragic accident veers Katey's dreams off-course but she continues to strive to get everything she can out of her life, even if Tinker can't be in it...


On the whole I generally give debut novels a bit of grace. A lot of times they are windows into what a writer will become in the future. And every once in a while that first novel is so exceptional that it points to greatness. Rules of Civility may be Amor Towles' first book, but it certainly won't be his last. This novel is so descriptive and evocative of what New York was all about in the 1930s from the music to the clothes and even down to the social moors. Towles transports readers back in time with finesse and elegance, showing them Manhattan in its prime, when anything seemed possible. Vivid and descriptive, full of nuance and innuendo, this novel denotes power and wealth and what they can do for a young woman on her own in a city that never sleeps.

I was impressed with Towles' power of description and thought that was the most interesting part of this book, but his ability to create engaging characters that bring the story to life is just as amazing. Katey Kontent is one of those characters that make readers believe they can accomplish the impossible. She is witty, intelligent and full of sass. She see's the world as her own, to do with as she will. Her positive outlook and determined spirit will resonant with readers and allow them to consider their own aspirations and how to make them reality. Towles' portrayal of Katey is fresh and original. She isn't a saint, and that makes her all the more interesting. I believe that readers will find her irresistible.


There are several ongoing themes in this novel, two of which are very obvious and will draw the readers attention. The idea of how one chance encounter, can change the course of a person's life has always been interesting to me. Towles explores this idea by using Katey's first meeting with Tinker to set in motion the rest of her life. There are those times in our lives when everything seems to change and it can happen in the blink of eye, causing a ripple effect that changes every aspect of who we are. I can think back to times like that in my own life.


The second theme involves how people can choose to re-invent themselves, adapt and change given the circumstances and situations life throws at them. Katey takes her own aspirations for a better life and doesn't sit around wondering how to make them happen. She does something about it. She takes that first step that sets in motion events that take her where she wants to be. I really found this book inspirational as well as entertaining. I can change my life today, this moment, if I am willing to take that first step... a remarkable thought!


I loved this novel and I would recommend it to all of my readers. The descriptions of New York alone are enough to carry this book. So vivid, so realistic and easy to see in the minds eye. But there's a lot more to this debut, there are some powerful themes here that are worth thinking about. Katey is a character you won't soon forget, she's inspiring and entertaining. This was certainly a lot more than I was expecting in a debut, which makes me long to see what Towles chooses to write about next.

Rules of Civility is available NOW from your favorite bookseller.


I'm obviously going to give this one 5 out of 5 apples from my book bag!

Check out the Q & A with Towles for your chance to win a copy of this exceptional book! 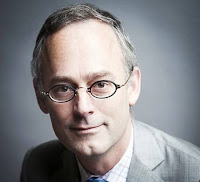 Amor Towles was born and raised just outside Boston, Massachusetts. He graduated from Yale University and received and MA in English from Stanford University. He is a principal at an investment firm in Manhattan, where he lives with his wife and two children. This is his first novel.
Posted by justpeachy36 at 1:05 PM