Please join me in welcoming Gabrielle Kimm to Debbie's Book Bag today. Gabrielle is here today promoting her latest release, The Courtesan's Lover. The publisher is sponsoring a giveaway for two copies of Gabrielle's book, see details at the end of the post.

Hi Deb – thank you so much for inviting me onto your blog?

What made me choose a courtesan for a main character?  Do you know – I’m not sure I did choose her.  I think it was more that she chose me!

As you probably know, Francesca Felizzi, my eponymous courtesan, was originally a secondary character in my first book, ‘His Last Duchess’.  She was mistress to the central character, Alfonso d’Este, the fifth duke of Ferrara, and from her exploits in that book, I knew her to be a feisty, independent, compassionate (and quite unreasonably beautiful) woman.  Her looks have got her into as much trouble as they have benefited her, over the years, and she has used her overt sex-appeal shamelessly to survive and prosper in an era where without material advantage, as a woman you have a fairly limited range of options.

She has borne the duke twin girls, and one of the reasons that she stays with him, as his paid mistress, in ‘His Last Duchess’, despite his complex and frightening moods, is because she sees his patronage as their best chance of a future.  Francesca is a devoted mother and is determined to make sure her girls do not end up on the streets.

When I finished writing ‘His Last Duchess’, I was able to bid goodbye to all my characters, content to let them get on with their lives without me, but Francesca wouldn’t let go.  She kept on appearing in my thoughts, interfering with other things I was trying to write – actually rather bugging me!  I became as obsessed with what she might be doing, and how she might be feeling, as I had been with the initial inspiration for the first novel, so it soon became clear that the only way I was going to have any peace was to give the girl what she so clearly wanted – a book of her own!  So as you see – it really was more that the courtesan chose me, than I chose the courtesan.

The central issue at the heart of ‘The Courtesan’s Lover’ is Francesca’s realization that, despite all the men she has bedded over the years, despite the admiration she has had, and the money she has made, no man has ever loved her.  Not even her father.  Being suddenly confronted with this desperate reality shakes Francesca to the core, and the glittering glamour of the life she has been leading instantly seems tawdry and pointless to her and her sense of herself is shaken into pieces.

It was an extraordinary process, getting to know a courtesan.

I started by reading up on the lives of the great courtesans – Veronica Franco, Ninon de Lenclos, Harriette Wilson, Cora Pearl – there were a fair number of them.  I was amazed by their independence, their resourcefulness, their courage and their sheer chutzpah   In an era in which women had virtually no freedom – be that socially, financially or sexually – the courtesans were basically independent feminist businesswomen.  They ran their own diaries, retained or dismissed patrons at will, made sometimes vast amounts of money, and metaphorically at least, gave the finger to anyone in authority who tried to curtail their activities or make moral pronouncements upon their behavior.  What more could you want for a central female character in a historical novel?

But I wasn’t happy.  I was anxious that, having read all this, I was in danger of over-romanticising my courtesan.  It’s like with pirates and highwaymen and people like that.  It’s all to easy to see them as yummy Jack Sparrow types, and to forget that in reality, most of them were amoral,ruthless robbers and murderers.  Yes, I wanted my courtesan to be gorgeous and glamorous, and everything else, but above all, I wanted her to be real.

I discovered a collection of writings from modern women in the contemporary sex-industry, and that proved to be the key to unlocking Francesca’s attitude to her profession for me.  These women – strippers, prostitutes, lap dancers, escorts – write honestly and openly about their experiences.  Their accounts are vulgar, shocking, funny, heartbreaking, tragic, eye-opening – and I found that I understood my courtesan far, far better for having read what they had to say.  By combining both the glitter and glamour of the accounts of the greats, with the grit and reality of the accounts of the not-so-greats, I hope I’ve come to some sort of believable depiction of what a sixteenth century professional lover might have been like. 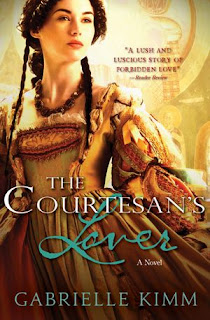 ~You must be a GFC follow or an E-mail subscriber to participate.
~U.S. addresses only.
~Deadline to enter this giveaway is Midnight EST May 25th.

Thank you for this interview and the chance to win this book. It looks really good.

Thanks for the opportunity to win this book.
Carol L
Lucky4750 (at) aol (dot) com

I have read a lot about this book and would really love to win it.'

Ms. Kimm comes to an interesting conclusion that the courtesans of this period were essentially feminist businesswomen. Certainly somewhat true and worth investigating. Thanks for offering this book.

Oh the things mothers do for their children.
It is great that you didn't want to over romanticize your courtesan, there is a lot to that profession that was not all bon bons and pretty things. You really put effort into making Francesca a real woman, and I can't wait to read about her!

Thanks for the awesome giveaway. Please enter me. Tore923@aol.com

I love the fact that the courtesean chose the author!

I've added it to my reading list.
Theresa N
weceno(at)yahoo(dot)com

This is a book I'm looking forward to reading! I've heard it's very good!

I enjoyed your review and since historicals are my favorite genre, this one sounds like something I would truly enjoy!

I love historicals and this sounds like a good one.