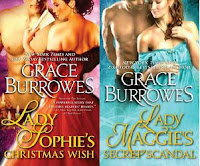 And she's been perfectly capable of keeping them...until now. When she's threatened with exposure, she turns to investigator Benjamin Hazlit to keep catastrophe at bay. But Maggie herself intrigues Benjamin more than the riddle she's set him to solve. As he uncovers more and more of her past, Maggie struggles to keep him at a distance, until they both begin to discover the truth in their hearts...

Author Grace Burrowes once again captivates readers with her latest addition to the Windam Sister's series. Lady Maggie's Secret Scandal continues the ongoing story of the Duke of Moreland and his family. Burrowes started out with stories about the Windam brothers and has not moved on the sisters in the family. This well written and moving historical romance is set in the Regency period and boasts compelling and richly drawn characters, as well as, a unexpected scandal.

Grace Burrowes is probably my favorite historical romance writer and that's saying a lot. Her stories are always interesting and heart felt, but I think the thing that really draws me into one of her books has to be the character development. Burrowes just has a way of bringing her characters to life. They are drawn so powerfully that the reader doesn't have any problem believing in them or identifying with their plight or situation. Lady Maggie is no exception.

Lady Maggie finds herself in a situation where her reticule is missing and it may contain damaging information that may hurt not only her but her family. Maggie is a mature woman, caring and perceptive. She is wiling to do just about anything for family. She's stubborn and independent and easy to become attached to. I think Burrowes did a great job with her character. She isn't perfect, she has a lot of room for growth and readers will see that throughout the novel.


Benjamin Hazlit is our hero in this one. I have thought him interesting character since his first appearance in Burrowes writing and was hoping we would see more of him along the way. Benjamin has woes of his own regarding his family, so he is well suited for Maggie. More importantly he is inquisitive and curious. He is a thinker. Not much gets past him, except perhaps the fact that he's falling love. I liked the fact that Burrowes shows Benjamin as strong and loyal, as someone who Maggie can lean on. He's a protector and a great character that readers will fall in love with.


I also liked the fact that Burrowes continues to tie in the rest of the Windam family that readers have come to know and love. Several previous characters make appearances in this book and I enjoyed catching up with them and finding out what they were up to know. I still think The Heir probably my favorite of Burrowes' books but Lady Maggie's Secret Scandal may be a close second.

This book is rich in Regency detail and protocol. I liked the descriptions of everything from the clothing to the countryside. Burrowes draws her portrait of times very well and gathers readers in with her descriptive prowess. She has a very good grasp on what readers want in a historical romance and is able to add other elements that enhance the story and bring the characters to life. This is just a great book, I can't recommend this author enough. Lady Maggie's Secret Scandal can be read as a stand alone, but that won't last long, you'll have to read another... and another... and... 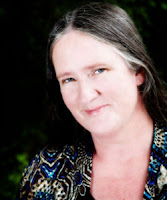 Grace Burrowes is the author of The Heir, which was named a Publishers Weekly Best Book of 2010, and The Soldier which is named a Publishers Weekly Best Spring Romance of 2011. She is hard at work on stories for the five Windham sisters, the first of which, Lady Sophie's Christmas Wish, is already on shelves. Grace is a practicing attorney specializing in family law and lives in rural Maryland.
Posted by justpeachy36 at 9:30 AM