Review and Giveaway: Pumped for Murder 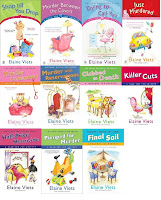 Excerpt from Pumped for Murder

Helen Hawthorne and her new hubby Phil have opened their own P.I. agency and their very first client is Shelby, who thinks her husband is developing a killer body for another woman. To keep track of the suspected cheater, Helen gets a dead-end job at Fantastic Fitness, where she has to pump iron to stay employed. Then the budding agency takes on a murder case, and Helen has to move her workouts to the early morning just to keep up. With so much weight on her aching shoulders, will Helen catch a killer-or just drop dead from exhaustion?

Helen Hawthorne is back with another dead-end job! Elaine Viets brings readers the tenth book in the Dead End Job series, Pumped for Murder. Viets blend of humor and murder is fun to read and full of surprises. Now that Helen's ex-husband has bit the dust she thought her dead-end job days were over, but when she and her new husband Phil open a private investigation business, she quickly finds herself right back in her comfort zone. A great addition to a long lasting series!

Many fans of the Dead End Job series were speculating where Helen would go next and about the future of the series after the last book brought several story arc's to an end, including the reason for Helen to work dead end jobs in the first place. For those who aren't familiar with Viets long lived series, Helen has worked very kind of dead end job you can imagine to avoid paying alimony to her less than perfect ex-husband. In the last book in the series, Half-Priced Homicide, her ex ends up dead and she is finally free. But readers wondered where that would leave the series? There was no need for more dead end jobs, but Viets surprised readers with her latest book in the series, Pumped for Murder. Helen has a new reason to work the low paying, unappreciated side of things and fans will be ecstatic.

I loved the new direction of the series. I have read several of the other books in the series and loved the overall premise, but the latest book is the best one I've encountered so far from Viets. She has a knack for picking the perfect dead end job and reason for Helen to work it. By starting a private investigations business there will probably be a lot more dead end jobs in Helen's future. I liked the fact that Viet chose a fitness angle for this book. Fitness has become a booming business as well as a great necessity in the U.S. today and I thought a very timely theme. I always find it funny how Viets can come up with so many off the wall jobs to make her books work. I hope there will be plenty more where this came from.

Helen is such a quirky, fun character. She finally gets her man in this one and it appears they are going to live happily ever after, but I have a feeling Viets has a lot more in store for these two. Viet injects just the right amount of humor into to her books to give readers a great cozy read. It's not too gruesome and gory like some main stream mysteries but it still has that edge, or urgency that readers need in a good whodunit. The secondary characters that Helen and Phil interact with are also well written and multi-layered. I loved the new building complex where Helen and Phil end up at in Florida and I expect we'll see a lot more of it's inhabitants in future installments of this series.

Viets has certainly done it again with this book. I recommend it cozy readers who enjoy a lot of humor and rollicking antics in their mysteries and to long time readers of the series. This is one you don't want to miss. It's my favorite of the series so far. Readers will find two cases for new P.I.'s Helen and Phil and an unexpected murder. It's a three-for-one you don't want to miss!

Pumped for Murder is available NOW from your favorite bookseller. 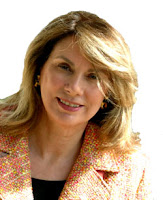 Elaine Viets has actually worked those dead-end jobs in her mystery novels, just like her character, Helen Hawthorne. Over the years, Elaine has been a dress store clerk, phone book proofreader, babysitter, telemarketer, bookseller, and weed puller at fifty cents a bucket.  She is also the author of the Josie Marcus, Mystery Shopper series and numerous short stories. Elaine has won an Anthony Award and an Agatha Award. She lives in Fort Lauderdale, Florida, with her husband, author and actor Don Crinklaw.

The publisher is sponsoring a giveaway of one copy of  Pumped for Murder by Elaine Viets.

~You must be a GFC follow or an E-mail subscriber to participate.
~U.S. addresses only.
~Deadline to enter this giveaway is Midnight EST June 4th.

1. Please leave a comment in appreciation to the author on this post, not the form.
2.Please fill out the FORM.

LOVE this series. Can't wait to read this book.

Yeah - another book for my must read list!
kpbarnett1941[at]aol.com

I can see where exercise and murder go together.
Theresa N
weceno(at)yahoo(dot)com

Anxious to read the book

This series is a tribute to all of us that have ever worked a dead end job---and that's most of us! Thanks for the great books.
suefarrell.farrell@gmail.com

Lord knows I have worked in my fair share of dead end jobs...so this sounds perfet!

Thanks for the shot!

Thanks for the giveaway. I can't wait to read this book.

This is a new series to me but it sounds like one I would really enjoy reading! I love "a lot of humor and rollicking antics" in my cozies, so this sounds like it would be right up my alley! Thanks so much for bringing this series to my attention and for the awesome giveaway:)

I had an exciting job...folding men's pants at JC Penney's. That was the whole job. I lasted a couple weeks before I lost my mind.

Very interesting premise for the book.

Thank you for the chance to win

LOL, Linda! I think we've all had a few dead end jobs in our time. Making ice cream cones at Dairy Queen was one of mine...

Elaine Viets is a new author for me. This sounds good! I'd love to read it!