Books In The Series: 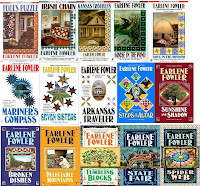 Folk art museum curator, rancher and sometime sleuth Benni Harper is back in an unforgettable new mystery, organizing a Memory Festival. But a sniper threatens to make it a day to remember in the worst way…

Benni and the ladies of her Coffin Star Quilt Guild are excited to display their Graveyard Quilt at the first ever San Celina, California, Memory Festival. The fair promises to be a moving event celebrating memories through quilts, crafts, scrapbooks, photographs, written word, oral histories, and tributes to loved ones.

But when a local cop is wounded by a mysterious sharp shooter with a vendetta against the police, Benni fears for her loved ones—especially her police chief husband, Gabe. Soon Benni is drawn into the search for the sniper, determined to make her hometown safe again…before their peaceful street fair becomes a shooter’s deadly target range.

Spider's Web is the 15th Benni Harper mystery written by author Earlene Fowler. Fowler continues to turn out quality cozy mysteries in the long lived series. The author's characters and plots continue to evolve and grow and readers can't seem to get enough. This series may focus on quilting but there is a lot more than meets the eye in this small town. Readers will be drawn in by the Memory Festival setting and find themselves trying to figure out who has it in for the police right along with Benni!


Earlene Fowler is a writer who has a way with words. She is very clear and concise in her writing. It seems not a single word is misplaced or unnecessary. Yet she is still very descriptive and her novels read with a kind of lazy Southern pace that makes enjoying the book more satisfying. 15 books into the Benni Harper series, Fowler's plots are still very original and refreshing. She doesn't rehash what happened 10 books ago or bring up old plot lines. Her stories are well thought out and fun to read.


Spider's Web was probably one of my favorites in this series. Fowler shows a lot of growth in her writing and in her character development in this one. It seems as though Fowler has a greater understanding of what's important in a good cozy. Most cozy readers read cozies for a couple of reasons. One of them is the lighter content. Cozies are not quite as dark and grisly as mainstream mysteries. The second reason is because they cleaner and have less language and sexual content than most mysteries. Fowler excels at writing this kind of book. She uses Benni's Christianity mildly and makes it a part of her character and not the focal point of the book. Which makes the Benni Harper series appeal to cozy mystery fans and also Christian fiction enthusiasts.


I thought Fowler did a nice job of incorporating Gabe's problems with PTSD into the story line and making them believable and important to the story. I liked the fact that Fowler knows her characters don't have to be perfect, they just need to be relatable. Character development over a 15 book span is probably very difficult. I can't even imagine how you would find some many different stories to tell, let alone how each character can continue to grow and change. But it doesn't seem to be an issue for Fowler. She writes these characters like they are real and someone one she knows. I like that!


I loved the whole Memory Festival theme and the graveyard quilt. The way that Fowler talked about those that had passed on in Benni's life was extremely believable and heartfelt. I loved the sentiment that went into this story and I think readers will really love that part of it. The sniper mystery was engaging and full of twists and turns. The motives and suspect that Fowler brings out are understandable and the storyline is plausible. This is something could have really happened. It's well written and a good clean fun read. Another great Benni Harper book!

Spider's Web is available NOW from your favorite bookseller.

Earlene Fowler was raised in La Puente, California, by a Southern mother and a Western father which is probably why her Benni Harper series features quilts, cattle, smart-mouthed women, cowboys and a sexy Latino cop.   She wrote literary and commercial short fiction for ten years with no publishing success when she decided to change gaits and write a mystery novel.

The publisher is sponsoring a giveaway of one copy of Spider's Web by Earlene Fowler.

~You must be a GFC follow or an E-mail subscriber to participate.
~U.S. addresses only.
~Deadline to enter this giveaway is Midnight EST May 22nd .

I've always thought it horrible when any policeman is murdered. I can't imagine what goes on with the inside of the police force. To find this out in a cozy written Earlene Fowler would make my day. I've read a few of her books. Always loved the different circumstances and the quilts. Thank you for entering me in the contest.

Sounds intriguing - and a new author for me to check out!
kpbarnett1941[at]aol.com

I haven't read this book but I love her books with Bennie in them, a great character and this cozy writer is one of my favorite writers.

25 pairs of cowboy boots!! I'm jealous, I always wanted cowboy boots. The book looks awesome, I will have to check it out.

Sounds like a really good read. Thanks for the giveaway. Tore923@aol.com

Thanks so much for this. I have never read a Earlene Fowler book, but I will now.

It's been a while since I've read one of Earlene Fowler's books---thanks for pointing me back to them.
suefarrell.farrell@gmail.com

After reading your review, this one sounds like a great read. It would be a new series for me but I always love finding new authors.

I am totally addicted to cozies. I really need to check this one out. Thanks for the giveaway! :)

Hi Deb. I hope you are well. :-)
This looks like a really nice series.
Thanks for sharing the review and giveaway.
Martha
mesreadsATgmail.com

This is a series I know I would really enjoy! Thank you for the giveaway!