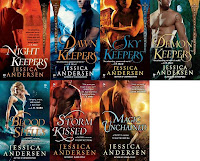 Cara Liu is determined to unite the winikin under her leadership. But her rule is far from secure as the traditionalists and younger warriors vie for control. And when Nightkeeper Sven enters the scene, Cara has trouble separating her duty to her people from her desire for her longtime love.

Sven knows the attraction between them could badly compromise her ability to lead the winikin, and jeopardize her people's tenuous alliance with the Nightkeepers. Nevertheless, she and Sven give in to temptation and begin a secret affair-- distracting them from a danger within their own ranks planning a vicious betrayal....

The Nightkeepers series written by Jessica Anderson is a series that takes the Mayan doomsday prophecy to new levels. The seventh book in the series, Magic Unchained is gearing up to the final battle. Anderson bases her series on the Mayan calendar and takes readers on an eventual ride toward the end of the world. Her world building is interesting and filled with complex relationships and settings. Her characters are well defined and realistic. This is a great series that will end with a final book in November of 2012. Magic Unchained is the catalyst to the final battle to save the world. The best of the series so far!

It's hard to believe this series is coming to an end soon. It has been such a well thought out and executed series that it's hard to imagine it ending. In most long lived series' the books start to decline in quality as the series goes on and there are fewer stories to tell about the characters or the overall story arc begins to play out. The Nightkeepers is a series that has never had that problem. Each book as been better than the last and Magic Unchained is no exception to the rule. Anderson has slower built this series up to the climax and each book has effectively ramped up the energy and gotten better and better.

With Magic Unchained the intensity that has been building up all along is coming to a head. The end is near and the reader will be able to feel it from the first page of the book. The romance between Cara and Sven has been a long time coming. Sven is a coyote nightkeeper with a roaming spirit. Cara,a winikin, has been basically his servant her whole life and the two are never meant to mix. I liked the whole forbidden love aspect of this book and how they figure out a way to make it work. It gives off the impression that no relationship is hopeless no matter how many obstacles stand in the way. Anderson writes the romantic parts of the book with a light touch. She doesn't drown the reader with detail, but let's the relationship unfold at good steady pace, while everything around it is imploding.


The suspense is building and it appears that it may take a miracle to pull off saving the world. Personally I hope that miracle is Rabbit, but I may be wrong. Rabbit is a character that Anderson has developed very slowly and carefully. He is misunderstood, has low self-esteem, just can't seem to make the right call on any decision. He would be the most unlikely person one would expect to lead the charge, to change the course of history and save the world. It could come about some other way, but I've just got a feeling about this one and I hope I'm right. Rabbit is an amazing character and I think Anderson had him posed for greatness all along.


The Mayan calendar and the end of the world prophecy's that surround it have always been an interesting idea that many people have heard about, read about or watched something on TV about. I found it interesting that Anderson realized the validity of doing a series based on it and used it to her advantage. Anderson has an amazing imagination and I can't wait to see what she does next. I'm looking forward to the final book in this series coming out later this year, but I'm also looking forward to what comes next from this author. They say you can't improve on greatness, but I think that remains to be seen in the literary arena. Anderson is an author to keep an eye on!

Magic Unchained is available NOW from your favorite bookseller. 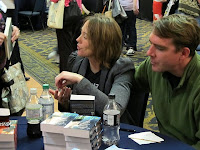 Jessica Andersen is a doctor of molecular genetics, a patent agent, and a professional horse trainer and riding coach. She resides on small farm in eastern Connecticut with her husband and beloved corgis, two-cats and a handful of young horses.
Posted by justpeachy36 at 9:30 AM