Review: Kiss of the Goblin Prince

Kiss of the Goblin Prince (Shadowlands - Book 2) by Shona Husk

Excerpt from Kiss of the Goblin Prince

The Man Of Her Dreams

He is like a prince in a fairy tale: tall, outrageously handsome, and way too dark for her own good. Amanda has been hurt before, though. And with her daughter's illness, the last thing she needs right now is a man. But the power of Dai King is hard to resist. And when he threads his hands through her hair and pulls her in for a kiss, there is no denying it feels achingly right.

In A Land Of Nightmares

After being trapped in the Shadowlands for centuries with the goblin horde a constant threat, Dai revels in his new found freedom back in the human realm. But even with the centuries of magic he's accumulated, he still doesn't know how to heal Amanda's daughter—and it breaks his heart. Yet for the woman he loves, he'd risk anything...including a return to the Shadowlands.

Kiss of the Goblin Prince is the second book in Shona Husk's Shadowlands series. Husk has created a series that is somewhat out of the paranormal box, using Goblins as a main paranormal character or element in her books. Readers will be intrigued by both the hero and heroine as they struggle to leave the past behind and start a future together. Husk's character development shines in this book and will have readers falling in love with Goblins!

Admittedly, I have not read the first book in this series. Kiss of the Goblin Prince can be read as a stand alone, but I think as a reader I would have understood the characters a little better had I read Goblin King beforehand. Undoubtedly, there was a large amount of world building and character introduction in that book that would have been helpful here. Going into this book I didn't know anything about the Shadowlands or about Dai's experience there or how the curse worked and what broke it. Husk is quick to remind readers of what has gone on before and it didn't take me long to get into the book and pick up on some of the nuances and information I might have missed out on.

The premise behind this book is a good one and I thought Husk presented it well and readers were able to get an idea early on about how things would go. Several members of one family were cursed for 2000 years to live in the Shadowlands as half-goblins. The Shadowlands was world of magic and greed populated by avarice goblins who would stop at nothing to get the gold they desired. Magic was everywhere and each use of it caused the brothers to lose some of the tenuous hold they had on their humanity. Now the curse has been broken and Dai must figure out how to live in the Fixed Realms (the human world). He finds himself attracted to a beautiful woman who has a tragic past of her own. The enjoyed the premise a lot and saw great potential in it.


The paranormal romance genre has been totally saturated by werewolves and vampires. Husk uses a paranormal character here that is very different from the norm. My experience with reading or hearing about goblins generally comes from fairy-lore and I was really excited to see how Husk approached the goblin character. She had a lot of room to maneuver in because goblins are not a widely used paranormal element. Her world building was amazing! The Shadowlands were dark and eerie and had this magical enchantment edge that was very enjoyable to read about. Husk obviously did her homework on how the goblin has been perceived because her goblin characters were well written and researched. This was a refreshing change from mainstream paranormal romance.


That's what I liked about this book. But there were a few things that didn't quite sit as well as the overall premise and the goblin world building and mythology. Generally, I like a book that provides at least some physical conflict. There wasn't very much of that in Kiss of the Goblin Prince. The curse has been lifted. There was no real villain here. No tension or urgency. The majority of the book was hero centered and focused on Dai's adjustment to the read world. That provided a slow pace for the book which some readers may not enjoy.

The slower pacing does give Dai and Amanda a lot of time to build their relationship, but unfortunately the book does not contain much romance. Yes, they are attracted to each other. Yes, they are both dealing with issues from the past clouding their present and future, but they really don't interact enough. I struggled a little bit with whether I would really consider this book paranormal romance, or more of a paranormal fantasy, with a hint of romance.


Another issue that I found I had with the book was the lack of magical activity. This series is based on the fact that the brothers have magical abilities that they are unable to use in the Shadowlands, but what happens to it when they return to the human world? It is obvious from the book that they still have these abilities, but the reader finds out very little about them or what they are capable of. I wanted more magic, but then again magic is one of my favorite paranormal elements so I may be a little biased.


The book is supposedly set in Perth, Australia. A very exotic locale and one I'm sure Husk is very familiar with since she is an Australian author. But if the reader didn't just know that ahead of time or missed where the book announces it, you would not be able to tell from the writing. The dialects and accents are not used in the writing, nor are any other distinguishing characteristics of the setting. I thought Husk could have really benefited from using the setting in the plot.


All that being said, I did enjoy this book. It just had a few hiccups. The premise was wonderful, the world building and mythology was very well written and I thought Husk did an a great job with character development. But the slow pace and the lack of romance were a bit disheartening. I think this series has a lot of potential and I look forward to seeing what happens next. Plus I will definitely be going back to read The Goblin King. So, take this one with a grain of salt, the issues are not deal breakers. Give it a try, you'll be glad you did!

Kiss of the Goblin Prince is available NOW from your favorite bookseller. 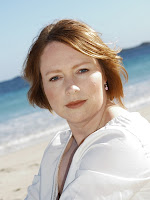 A civil designer by day and an author by night, Shona Husk lives in Western Australia at the edge of the Indian Ocean. Blessed with a lively imagination she spent most of her childhood making up stories. As an adult she discovered romance novels and hasn't looked back. Drawing on history and myth, she writes about heroes who are armed and dangerous but have a heart of gold--sometimes literally.
Posted by justpeachy36 at 10:30 AM