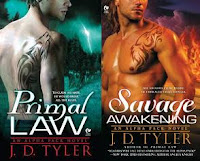 Excerpt from Savage Awakening courtesy of Amazon's Inside Look Feature

A group of former Navy SEALS, the Alpha Pack is a top-secret team of wolf shifters with Psy powers combating the greatest dangers in the world. But sometime those dangers are more intimate than they bargained for...

After a mission goes wrong, Aric Savage is taken prisoner. Half-dead and despairing, he makes a stunning discovery: his Pack mate Micah Chase, who was reported dead, is a fellow captive. When the Alpha team goes into full-rescue mode, accompanying them is an absolute stunner with sable hair--and a spine of solid steel.


LAPD officer and Psy Dreamwalker Rowan Chase has one priority: her brother Micah's recovery. Still, she can't help but be drawn to Aric, the ruggedly handsome wolf shifter who pleasures her as no man ever has--however fleeting their affair is destined to be. But when Aric's life is endangered, Rowan must ask herself what she's willing to sacrifice in the name of love, for the man fated to be her Bondmate.

Savage Awakening is the second book in the Alpha Pack series featuring former Navy SEAL's who are forever changed after a mission in Afghanistan. J.D Tyler continues her series about a pack of shapeshifter's that will steal the hearts of fans. Tyler's shifters are strong, loyal and very protective of their own and they fight against the worst of the worst. Readers will love the intensity and heat that Tyler brings to her novels and quickly be immersed in her shifter world. A great addition to a new and upcoming paranormal romance series!


Savage Awakening is one of my favorites of the year so far. J.D Tyler's shifters are both sexy and lovable. They have a strong moral compass and some pretty wicked abilities. I liked the fact that Tyler chose to make her characters former Navy SEALs, the elite. And I think it translates well into their new roles as members of the Alpha pack. Their resilience and belief that they could rescue Aric and their other fallen comrade Micah was compelling and totally believable. I didn't have any problem rationalizing this storyline. It's a great shifter story and brings out some really good characters. This series in my opinion could do for shifters what J.R. Ward's Black Dagger Brotherhood did for vampires.


If you haven't read the first book in this series, Primal Law, I suggest that you do before reading Savage Awakening. Tyler jumps right into the action in this book without doing too much rehashing of what happened in the previous book. This one picks up right where the last one ended with Aric being held captive and finding out that Micah a pack mate who is presumed dead is still alive but in mortal danger. If the reader was unaware of some of the circumstances from the first book, I'm pretty sure they would be confused and it might take a while to work it all out. There were several characters introduced in the first book, that make appearances here and add to the overall backstory of the pack.


The romance in this one is hot and steamy. Micah's sister Rowan just happens to be Aric's bondmate and both of them try to deny it, but their reactions to each other won't let them. I thought Rowan was a good counterpart for Aric. She was strong and courageous and very no-nonsense, a what you see is what you get kind of girl. Aric wasn't your typical hero. He was a bit self conscious and hid a lot behind a very snarky sense of human. He had a dry wit about him that was fun to read and Rowan was essentially the same way. I laughed a lot during htis book even though there were times when it was a big dark and foreboding.


I learned a lot about characters who will be in future books. We learn more about Kalen who's book comes out in December and Sariel as well. There are so many different directions that Tyler could go with this series. I am excited to see where she takes us next. This is a great addition to the series and I can't wait for the next one!

Savage Awakening is available NOW from your favorite bookseller. 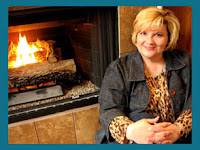 J.D. Tyler is an award-winning, multi-published author who writes for New American Library under three pseudonyms. Whether this is due to an overdose of ambition or a multiple personality affliction, she’ll never tell.
J.D. writes dark, sexy paranormal romance and has a huge thing for shifters, vampires, the Fae, and just about everything else that goes bump and grind in the night. She can’t get enough of those dangerous supernatural heroes, and the fun of creating her own was just too much temptation to resist… so she didn’t. J.D. doesn’t do self-denial.
When she isn’t writing, J.D.’s idea of a good time certainly isn’t cleaning house (sniff), bungee jumping (not in this lifetime, or the next), or camping (her idea of “roughing it” is a slow bellboy). She enjoys reading, being pampered like the diva she is, and spending time with her awesome family. She lives in Texas with her two teenagers.
Posted by justpeachy36 at 9:30 AM