I had in mind to post something to do with Thanksgiving each day this week, but as fate would have it, I was extremely busy. My youngest daughter Allison did a little research here and there for me and came up with a couple of really good Thanksgiving crafts, some good Thanksgiving recipes you might want to try and a little information on Thanksgiving Traditions.

From our family to yours we want to wish you very happy Thanksgiving and offer you these ideas for the holiday season! Have a great one!

What You'll Need:
How To Make It: 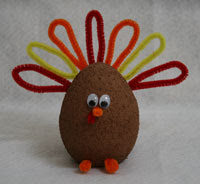 I did not know anything about Thanksgiving till I started blogging. I like your note regarding the Traditions so it gives me an idea of what is happening over there. I know about the food because there is a surfeit of it all over!!!!

A very happy thanksgiving to you and your family.

My name is Jennifer martins, from USA I never believed in love spells or magic until i met this spell caster once when i went to Africa in February this year on a business summit. I meant a man who’s name is DR.madurai he is really powerful and could help cast spells to bring back one’s gone, lost, misbehaving lover and magic money spell or spell for a good job or luck spell .I’m now happy & a living testimony cos the man i had wanted to marry left me 3 weeks before our wedding and my life was upside down cos our relationship has been on for 6years. I really loved him, but his mother was against us and he had no good paying job. So when i met this spell caster, i told him what happened and explained the situation of things to him. At first i was undecided, skeptical and doubtful, but i just gave it a try. And in 7 days when i returned to usa, my boyfriend (now husband) called me by himself and came to me apologizing that everything had been settled with his mom and family and he got a new job interview so we should get married. I didn’t believe it cos the spell caster only asked for my name and my boyfriends name and all i wanted him to do. Well we are happily married now and we are expecting our little kid, and my husband also got the new job and our lives became much better. His email is maduraitemple@yahoo.com