Sarah Zettel on the WEB: Webpage 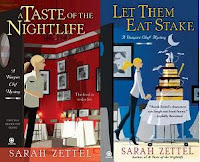 Excerpt from Let Them Eat Stake courtesy of Amazon's Inside Look Feature.

Charlotte Caine isn't called the "Vampire Chef" because she's a member of New York's burgeoning undead community--She just cooks for them. But when she caters a vampire-witch wedding, she's in for a rude reception...

It's a dream for a "Vampire Chef"-cater the high-profile wedding of a 200-year-old vampire and a wealthy witch. So why did celebrity chef Oscar Simmons walk away from this gig? Charlotte agrees to take his place, even though she knows this event, thrown by power-hungry vampires and witches, could make (or break) her career, her restaurant, and her life. But when Simmons turns up dead, the groom's family starts vanishing, and the police start asking pointed questions, Charlotte fears she may have picked the wrong wedding to stake her reputation on...

If you are a paranormal fan and a cozy mystery enthusiast, this is the series for you! Sarah Zettel continues her Vampire Chef series with Let Them Eat Stake. This is the second book in the series about restaurant owner Charlotte Caine. Zettel has a flair for the dramatic, a very good grasp on character development and her wit and humor shine in the dialogue of this book making it one book that won't be easily set aside. This is one of those stay-up-all-night reads!

When I first found out about this series, I admit to some skepticism. I wasn't sure that a cozy writer could pull off a series of this kind. I know, I know... I was assuming that a writer who can do one thing well, couldn't possibly do the other, but I neglected to think about the fact that Sarah Zettel doesn't just contain her writing to mysteries or the paranormal, she also writes in various other genres under different pen names. I am a fan of her writing no matter the subject and that helped me decide that I wanted to read this series in spite of my initial hesitance. I am glad I gave this one a chance because it is excellently written and well worth any cozy readers time.

Vampires, witches, weres... you name it this series probably mentions it! I liked the world building that Zettel did in the first book, allowing the readers to see how the paranormal species became known to humans and about the restrictions and regulations for each type. I liked the fact that Zettel did not make the main character a paranorm. She keeps Charlotte grounded in her humanity even though she is serving both Night and Daybloods in her restaurant, Nightlife. Her brother is a vampire and that helps to tie her into the vampire scene. Zettel's reality was believable and very enjoyable to read about.

In this second addition to the series, Charlotte is asked to cater a vampire/witch wedding that could make or break her reputation. I liked the fact that like the author Charlotte takes some big risks in this book. It could backfire and put Nightlife out of business if she doesn't pull this one off right. I think Zettel showed that she was willing to take some risks as well, with her character development and her take on vampire and witch mythology. I liked the the urgency that the reader feels with this book. It's kind of do or die and that was nice.

Zettel is able to make you love or hate her characters in turn. This book is a little more sinister than her first book in the series and her characters are somewhat darker. The good guys are good and the bad guys are really bad, there is no cloudy motives or anything like that. Charlotte has her moments and  she is most definitely human. I like characters that a flawed in some ways and Zettel really brings Charlotte and the gang from Nightlife to life here.


The mystery aspect of the story was quite interesting. The vampire/witch wedding of the century was a great plot element. In the beginning I was really curious as to why Simmons decided to give up the plush job of catering a wealthy wedding, but when he showed up dead it became a little more clear. I liked the fact that the author gives the reader a lot of think about here, not just the motives and the clues to the killer but the underlying themes of relating to people of all kinds, shapes or sizes. Sometimes a mystery is a little bit more than what meets the eye.


I liked this one a lot and I think paranormal fans and cozy readers will love it. If it's a little out of your comfort zone, give it a try anyway, you'll be glad you did!

Let Them Eat Stake is available NOW from your favorite bookseller. 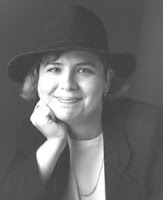 Sarah Zettel was born in California in 1966. Since then, she's lived in ten cities, four states and two countries. She has written four science fiction novels and many short stories in the sf, fantasy and horror genres. Her debut full-length work, Reclamation, won the Locus Award for Best First Novel. Sarah now lives in Michigan with her husband and their son.

The publisher is sponsoring a giveaway of one copy of Let Them Eat Stake by Sarah Zettel.

~You must be a GFC follow or an E-mail subscriber to participate.
~U.S. addresses only.
~Deadline to enter this giveaway is Midnight EST May 14th.

1. Please leave a comment in appreciation to the author on this post, not the form.
2.Please fill out the FORM.
Posted by justpeachy36 at 11:30 AM

Even though I am not into vampire books since this is a Cozy I am very interested in reading it.

My daughter is the vampire fan so this would make a nice birthday gift.

thank you for the giveaway!!!!

This book sound really interesting. Vampires, witches and weddings, plus a mystery.
Thanks for the giveaway.
Bonnie

I usually am not interested in Vampire books--but this one sounds so light and not ghoulish at all---I think I'd like it.
suefarrell.farrell@gmail.com

I have started to enjoy the paranormal genre so I can't wait for this one.

Even though I am not big on paranormal the idea of a vampire chef tickles my funny bone.

This sounds kind of quirky and off beat but I'd like to read it. Not the usual vampire/witch book, fortunately.

This series sounds like a hoot! Thank you so much for sharing about it and for the fun giveaway opportunity.

I like the fact that it's a mixed genre of cozy mystery and paranormal. Thanks for the chance.