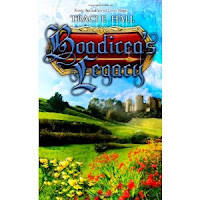 Boadicea's Legacy (Boadicea's Descendants series - Book 3) by Traci E. Hall
( For review from Medallion Press)
Synopsis:
Ela Montahue is a talented sorceress descended from Boadicea, the legendary warrior queen of the Iceni tribe. She has the miraculous power to heal but, years before her birth, Boadicea issued a decree that Ela must marry for love not political practicality, or she will forfeit her supernatural power. Marrying Lord Thomas de Havel, the vile landowner with connections to King John's court, would benefit Ela's family tremendously, but would strip her of her miraculous gift. When Ela refuses the repulsive marriage proposal of Lord de Havel, he abducts her and wages battle against her father in retaliation. Knight Osbert Edyvean, who has been paid to find Boadicea’s spear, rescues Ela instead and must fight his overwhelming passion for a beautiful lady he wants to protect and love.
Thoughts:
Boadicea's Legacy is the third book about the descendants of warrior Queen Boadicea of Iceni tribe. In this third installment, Traci E. Hall gives us another great paranormal romance, set in a very real English past.
Ela's family is determined to gain the wealth and prestige that will come with Ela's marriage to Lord Thomas. However, Ela knows that she must marry for love if she intends to keep her healing gift. Besides the fact that she can not stand Lord Thomas, Ela does not want to give up being able to heal people, it is her passion in life. When Lord Thomas realizes she will not marry him he kidnaps her and it's up to Osbert Edyvean to rescue her. Despite his quest to find Boadicea's legendary sword Os, must fight the feelings he is developing for Ela.
Both Ela and Os are great characters. Hall has done a wonderful job with the character development in this book. Ela starts out as a young woman who wants nothing more out of life than to be able to help other people with her healing gift. But, when it comes to a decision of helping her family gain wealth and prestige or giving up her gift she must follow her heart. As her character learns more about life she begins to see that love may also be in her future. This is a great love story.
Os is an honorable knight with conservative ways. His quest is to find the sword of Boadicea, but instead he ends up saving Ela. He wonders if she is what she seems or perhaps a witch. We see the conflict within him as he tries to rationalize his feelings for Ela. Hall really delves into the idea of things not being exactly what they seem and not basing your opinions on assumptions.
I give this one 4 out of 5 apples from my book bag!

Boadicea's Legacy is available now at Amazon!
Posted by justpeachy36 at 1:12 PM

A good internal conflict makes or breaks a book. The book sounds like something I could get hooked on!