Review and Giveaway: Death on a Platter


(Received for an honest review from Obsidian)

Books in the series: Dying in Style, High Heels Are Murder, An Accessory to Murder, Murder with all the Trimmings, The Fashion Hound Murders, An Uplifting Murder, Death on a Platter

Excerpt from Death on a Platter (Look Inside)

Video: There are several videos in circulation about Elaine or featuring her, but none pertained specifically to this series, but I would encourage you to look them up, she does some wonderful writing seminars etc.


Mystery shopper and mom Josie Marcus knows how to keep a low profile - in style. On her newest assignment scouting St. Louis eateries, she encounters a saucy killer with a secret ingredient...


Josie plans to savor her new assignment: sampling the local St. Louis cuisine for a City Eats Food tour. She devours the delicious toasted ravioli at Tillie's Off the Hill Italian restaurant - until her appetite is ruined when another customer is poisoned. Revenge is best served cold, but sometimes it comes with dipping sauce on the side.


The owner, Tillie, is an old friend of Josie's mother, who after Tillie is arrested, begs Josie to investigate. Was the victim the real target - or is someone trying to ruin the restauateur's reputation? Either way, it's up to Josie to find a killer who had no reservations about preparing a dish to die for...


Death on a Platter is Elaine Viets seventh book in the Josie Marcus, Mystery Shopper series. Seven books in, this is a series that still seems fresh and inventive. Mystery shoppers can shop for just about anything it seems and in this one it's food. Viets showcases the cuisine of St. Louis, from it's eclectic mix of ethnic foods to the more traditional stuff like brain sandwiches (still served locally) and pig ears, quite the delicacy.

There was a lot to like in this addition to the series and I thought Viets did St. Louis proud. Josie's escapades in food tasting were so fun to read about. Her descriptions of her misadventures were the best part other than the mystery. I also loved the section at the end of the book where Viets goes into the history of the food and even tells readers where they can go in St. Louis to get it! Now that's commitment to the story! I've gotta try that gooey butter cake next time I venture into the show me state!


I was relatively unfamiliar with this series when I started this one and I got so interested in the characters I ended up going back and reading a few of the others. I'm one of those people that at one time in my long career history, I found myself looking at the want ads and wondering exactly what a mystery shopper was, and if that was a real job, LOL! I mean, you shop for free and get to keep the stuff, how cool is that? In Death on a Platter, the subject of course is food, but it was still interesting being able to try all this stuff on somebody else's dollar.


I thought Viets use of a tried and true favorite in St. Louis, the fried ravioli was unique and interesting. Poison always seems to be the easy way for killers in my book. It's a little less messy, more controlled, and less personal, but you still get the same result and in this case, the victim had plenty of enemies who could have done the deed. Some of the suspects included his wife and his girlfriend, how's that for motive? Viets always seems to have an angle with her books and like the sass and the resourcefulness she gives to Josie. The whole story hinges on Josie's inability to say no to her mother, which incorporates a lot of back story into it, including Josie's relationship with the town vet.


I recommend this one to cozy fans who love good food. St. Louis was a great setting and Viets does a remarkable job of showing exactly what cringe worthy dishes a mystery shopper might be called upon to eat... NO brain sandwiches for me! The mystery was well written and added some punch. The characters were so engaging I wanted to read more. I loved the covers too! Get cover art, though the yellow wasn't a favorite of mine, the others were a lot of fun.

Death on a Platter is available NOW from your favorite bookseller. 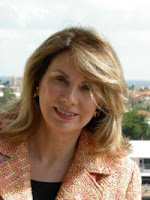 Elaine Viets is an Agatha and Anthony Award-winning author. She was also given the key to the city of Maplewood, Josie's hometown. Her mother was a mystery shopper in Elaine's hometown of St. Louis. Elaine has served on the national boards of the Mystery Writers of America and Sisters in Crime. She lives in Fort Lauderdale with her husband, reporter Don Crinklaw.

The publisher is sponsoring a giveaway for one copy of Death on a Platter by Elaine Viets.


~ You must be a Google Friend Connect follower to participate.
~ US Addresses only (Publisher Request).
~ The deadline to enter this giveaway is Midnight EST December 2nd.


1. Please leave a comment in appreciation to the author on THIS post.
2. Please fill out the FORM.
Posted by justpeachy36 at 8:00 AM

I just recently heard of this series and would love to read it!

I enjoy cozy mysteries and I enjoy food---so I should enjoy this book!!
suefarrell.farrell@gmail.com

Oops--I left the wrong email above--it won't match my form entry. Here's the one on the form.
farrell@crosslake.net

Thanks for the contest.

I absolutely love this series!! I haven't gotten my hands on a copy of this one yet, though, so thanks for the chance to win one :)

I like to read cozy mysteries I just recently started reading them.

This books sounds so good! Hope to read to read it soon!

I love cozy mysteries, count me in. kittycrochettwo at msn dot com

This sounds like a good cozy mystery series and I can't wait to get started on them!
mamabunny13 at gmail dot com