Review: The Storm that is Sterling 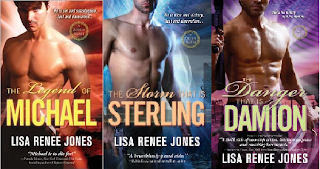 Excerpt from The Storm that is Sterling


Sterling Jeter has remarkable powers as the result of a secret experiment to create a breed of super soldiers. Now he has to use everything he's got to help beautiful, brilliant Rebecca Burns, the only astrobiologist alive who can save humanity from a super-enhanced, deadly street drug.

Sterling and Rebecca's teenage romance was interrupted, and now they're virtually strangers. But the heat and attraction are still there, and even entrapment by an evil enemy can't stop them from picking up their mutual passion right where they left off...


The Storm that is Sterling is the second book in the Zodius series written by Lisa Renee Jones. This is a series that combines romance, the paranormal and suspense into one delectable package. Jones weaves a tale that incorporates all the things reader enjoy about each of these genre's into a novel that is full of heart stopping action, sizzling romance and some really interesting supernatural abilities!

In the Zodius series readers will find two brothers with two totally different views of the world. One wants to to save it, the other wants to rule it. Adam and Caleb Rain are the leaders of two groups of super-enhanced soldiers that were given Alien DNA to make them faster, stronger and more resistant to just about anything. Adam is the leader of the Zodius, a man bent on taking over the world at any cost, while Caleb leads a group called the Renegades who have vowed to protect humanity.

Jones captivated readers with the first book in this series, The Legend of Michael and continues to hold their interest in her latest book, The Storm that is Sterling. Having created a world that is vastly different from what readers are used to, Jones uses her smooth style and descriptive powers to draw the reader in from the first page. Her characters are well fleshed out, with strong personalities and more passion than some could handle. She is able to make the reader believe in the possibilities.

Sterling is an alpha male on steroids in a sense. He was already sexy, already strong and determined but the Alien DNA he received has made him a force of nature. He epitomizes the idea of the perfect storm. He is fearless, yet he shows his vulnerability when he re-encounters Becca after 14 years. I liked the fact that Jones shows that Sterling may be hard and commanding, but he has a softer side as well. I thought he made the perfect hero for this book. As he and Becca try to not only save the world from Adam's latest attempt to subjugate it with a powerful street drug called ICE, but also to save her life readers will see the loyal and strong man that Sterling really is.

Becca was a great heroine. She's a fighter and she isn't about to quit. Though she has cancer she isn't down for the count and when she is captured and given the fatal drug ICE by the Zodius she has all the more reason to try to find a cure. Becca is smart, an astrobiologist, she's beautiful and she has a score to settle with Sterling. I always love a good second chance story and this one really fit the bill. Becca and Sterling knew each other in high school and the passion that builds between them is all the more sensual because of their past together. Jones creates a perfect couple with these two. A man who will stop at nothing to protect her and a woman won't give up on him or herself.

This is a great Paranormal Romantic Suspense series, that offers the reader a glimpse of just what might have gone on in places like Area 51. The Storm that is Sterling can be read as a stand alone, but make sure you use the glossary in the front to brush up on some of the terms used in the book. Jones' world isn't typical and some readers may need the backstory from the first book to understand what's going on. I recommend them both as this is a great series. There is something for romance readers, paranormal enthusiasts and action junkies. A great combination of genres that will appeal to many kinds of readers!


The Storm that is Sterling is available NOW from your favorite bookseller.