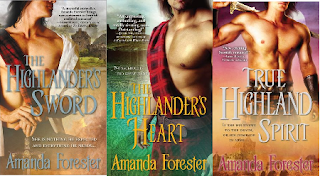 Except from The Highlander's Heart


Lady Isabelle Tynsdale would sooner face a wild boar than spend a night with her vile future husband. Isabelle's escape sends her over the Scottish border only to be captured by a gorgeous laird who intends to ransom her in order to pay off his clan's debts. But David Campbell is sorely mistaken if he thinks she's going to go quietly. And laird Campbell never expected that one lovely English countess could be so much trouble - or that he would have such a hard time letting her go....


Author, Amanda Forester takes readers back to the Scottish highlands with her latest release, The Highlander's Heart. What happens when a highland laird meets his match with a English countess? A passionate romance, that will have readers sighing with contentment. Forester's ability to create engaging characters, her knack for using historical references and her sharp wit, make this novel a highland love story that can't be missed!


When I first received The Highlander's Heart, I was somewhat daunted by the size of it. At almost 500 pages I expected there to be parts where the book would drag, where the action would slow down and I would get bored, but I was wrong. The Highlander's Heart is the second book in Forester's Highlander series and it definitely lived up to the first book. The action remained constant, the romance passionate and the side stories full of humor and richness. I love it when an author can make 500 pages seem like it's nothing because the story is so engaging and full.


Forester's characters were vibrant and real, making the story come alive in a way that some authors are unable to attain. Each of the main characters is well rounded and has their own unique attitudes that will have the reader laughing, scratching their heads and just plain enjoying their every move. The secondary characters play a large role in allowing the novel to progress well. There are several side stories that these characters play into that add to overall effect of the book. Each character has a personality, a back story, a reason for a being included and I thought Forester did a fantastic job of making each one important and real.


Lady Isabelle is not your typical English lady. She has some fight in her and when she runs away from a violent and controlling husband she understands the risks she is taking. He will want her dead and she will have to find a way to prevent him from getting his wish. There are times throughout the book, when Isabelle shows her tenacious spirit and fiesty demeanor, but she also shows her vulnerability. She is lost in her feelings for David and she doesn't know what to do and that's very compelling. Readers will love Isabelle's many attempts to escape David and the way she is always getting herself into one mess after another.


Laird David Campbell is the epitome of a Highland warrior. He is respected, he is loyal and he's all alpha male. When he finds an English lady running around the countryside alone, being the man that he is, he decides to come to her aid, but when he finds out who she is, he realizes that she may be of more help to him than he could have dreamed. Ransoming her could get his clan out of debt and start them on the right track. He has to consider his people over his own feelings, but that's hard to do when figures out that his attraction to Isabelle is more than a passing fling. Forester portrays him as a man with a lot weight on his shoulders, but he carries it well. He comes across as a born leader, a passionate man, with hopes and dreams for his people. Definitely a first class hero!


I really enjoyed this book for a lot of reasons. Scotland of course is near and dear to my heart, considering my heritage and finding and author who treats the Highlands accurately, historically and emotionally is rare. There are so many highland romances out there, that readers need something to draw them to a particular author. Forester's draw has to be not only in her elegant writing style but in her attention to detail. The historical references and settings are believable and authentic in her writing, it's easy to see she's done her homework and readers will really appreciate the time and effort she put into making this book as historically accurate as possible. But even more importantly she captured the fighting spirit of the Scottish people, the determination and the loyalty to clan and family. This is a well written historical romance that would recommend to any of my readers. Take the time to read this one, it's well worth it!

The Highlander's Heart is available NOW from your favorite bookseller.

Amanda Forester holds a PhD in psychology and worked for many years in academia before discovering that writing historical romance novels was way more fun. she lives in the Pacific Northwest with her husband and two energetic children. The Highlander's Heart is the second novel in her Highlander series. The first, The Highlander's Sword, was published March of 2010, and the third in the series, True Highland Spirit will be released spring 2012.
Posted by justpeachy36 at 12:00 PM