Review: Guinevere, The Legend in Autumn 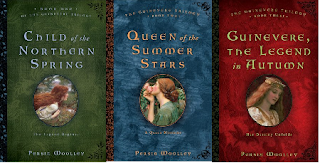 Excerpt from Guinevere, Legend in Autumn (Look Inside feature)


Though Camelot's power continues to grow, peace in Britain remains uncertain. Tensions have increased with the quest for the Holy Grail, and the restless champions of the Round Table have faded. As a volatile generation of new warriors takes shape, Guinevere soon comes to realize that the greatest dangers to the crown lie not beyond the walls of Camelot but among those she loves most. When an undeniable spark ignites between Guinevere and Lancelot, their secret passion may prove to be Arthur's undoing. With an ominous and unrelenting destiny bearing down upon her country and her king, Guinevere must draw upon her unyielding spirit for the courage to carve triumph from the dramatic tragedies of fate.


Guinevere, The Legend in Autumn is the final book in Persia Woolley's sweeping trilogy featuring King Arthur's legendary queen. Woolley constantly surprises with her in depth knowledge of the time period and the players that readers have loved for ages. She brings new life to Queen Guinevere and shows Arthur and Lancelot in a new light. With impeccably researched historical accuracy Woolley weaves a tale that is somewhat different from the tales and legends we've all heard before, making this novel seem fresh and original despite the beloved subject matter.


I have always been a fan of Arthurian legends. When I first started reading Persia Woolley's Guinevere Trilogy I was really surprised at how the author was able to portray Guinevere. She shows her a strong woman of Celtic heritage who finds herself married to a king. In the first book Woolley dealt a lot with Guinevere's childhood. In the second book she went into the first years of Arthur and Guinevere's marriage, the beginnings of the Round Table and other crucial events to the story. Now in the third book readers are posed to read about the blooming relationship with Guinevere and Lancelot, Mordrid's years in Arthur's kingdom and the final show down between father and son. Woolley has brought new life to this old, old story that is so loved, by so many. I truly loved the entire trilogy, but Guinevere, The Legend in Autumn is definitely my favorite.


Guinevere has gone through so many changes. She was young innocent girl, then a resourceful and determined woman and now she has taken on motherhood, though she has no children of her own. I always got the impression from reading these novels that Guinevere was always willing to do her duty. She dutifully married Arthur, she helped him build Camelot up and make it the kingdom of his dreams, now she dutifully raises a son that he fathered by another woman. Everything was always about someone or something else. Until the spark of passion ignites between Guinevere and Lancelot. This one thing she did for herself. For her own feelings, needs and desires and it ended up bringing her world down and crumbling around her. I loved Woolley's portrayal of Guinevere. Through it all she is stoic, strong and holds her head high. I felt like I learned so much about a legendary character that I thought I already knew a lot about. Woolley educates as much as she entertains with this one.


Arthur does come out smelling like a rose as he does in most of the stories written about him. He was a driven man. A loyal man, with a great vision. But that vision consumed him, leaving little time for his relationship with his wife. In the beginning he seemed as attentive to Guinevere as he could be, but there was always some other thing that held his attention. He asked a lot of her and Woolley easily shows that not everything that happened was Guinevere's fault. I liked this Arthur much better. He is more realistic, more human in a sense. He is flawed, yet he is still a great man, a great warrior. I liked that. He lets his emotions get the better of him at times, especially when he finds out about Guinevere and Lancelot and I thought that made him all the more endearing. I thought I loved Arthurian legends before, this trilogy has taken it to a whole new level.


Woolley uses history to her fullest advantage, she weaves it into just about every paragraph of the this book. She takes everything that she has been researching for years and creates a very vivid portrait of Britain during this time period. It's easy to see why students and scholars would be interested in using her work in an academic setting, yet it is still so interesting. It definitely has the feel of novel instead of a text book. It is engaging, almost riveting at certain points and I cannot recommend it enough to readers who love Arthur and Guinevere. To historical fiction fans who love the history behind the legends. You don't want to miss this one or any of the books in this trilogy!

Guinevere, the Legend in Autumn is available NOW from your favorite bookseller.

Persis Woolley is the author of The Guinevere Trilogy: Child of the Northern Spring, Queen of the Summer Stars and Guinevere, Legend in Autumn. Persia has had a career in journalism and television, and she has also written three nonfiction books. She presently lives near the northern California coast with her son and is currently working on an annotated version of her Guineveres for the use of students and scholars in the field.
Posted by justpeachy36 at 12:00 PM