Excerpt from The Doomsday Vault (Use the Look Inside Feature)


The honorable Alice B. Michaels is in a life-or-death struggle for survival - socially speaking, that is. At age twenty-one, her unladylike interest in automations, and the unfortunate deaths of most of her family from the clockwork plague, have sealed her fate as a less than desirable marriage prospect.  But a series of strange occurrences is about to lead Alice in a direction quite beyond the pale.


High above the earth on the American airship USS Juniper, Gavin Ennock lives for the wind and the sky and his fiddle. After privateers attack the Juniper, he is stranded on the dank, dirty, merciless streets of London. When Alice's estranged aunt leaves her a peculiar inheritance, she encounters Gavin under most unusual - even shocking - circumstances.


Then Alice's inheritance attracts the attention of the Third Ward, a clandestine organization that seizes the inventions of mad geniuses the plague leaves behind - all for the good of the Empire. But even the Third Ward has secrets. And when Alice and Gavin discover them, a choice must be made between the world and the Empire, no matter the risk to all they hold dear.


The Doomsday Vault by Steven Harper is the first in a new Steampunk series about the Clockwork Empire. As a reader and reviewer I have not had too much experience with the Steampunk sub-genre.  The books I have read including Clockwork Angel by Cassandra Clare and the books from "The Parasol Protectorate" series by Gail Carriger were exceptional, so my opinion may be slightly skewed. My best advice is to take my review with a grain of salt and if is sounds interesting to you, try it for yourself.

Harper has created an Elizabethan England is vastly different from what readers might expect. I think Harper succeeds in some aspects of the book while falling short in others. His world building skills were amazing. I loved the whole idea behind the series. The clockwork plague was both interesting and insightful. As many of you know I am not the biggest zombie fan, but Harper's take on zombies was somewhat different than the norm. Those who have suffered from the clockwork plague eventually turn into mindless zombies, but they are not the crux of the story. I also liked the idea that while this was a deadly disease it also gave some the abilities of a genius for a short period of time allowing them to make some amazing discoveries and inventions. It was certainly a refreshing premise, that something so evil could still provide some good to the world. The Third Ward added an interesting dimension to the book, and had me wondering about their motivations. I expect there to be a lot more than meets the eye with them in future installments in the series.


I generally give the first book in a series a certain amount of grace, considering the fact that the author has a lot to accomplish in the first book. He or she must set up the entire series, while still providing a good solid plot that will keep readers coming back for more. I think Harper spent a great deal of time building up the background, explaining the situation and prepping the reader for what's to come, but he fell short a bit in characterizations and relationship building. I think readers will really appreciate how Harper was able to incorporate automations, airships and all of the things that make a good steampunk novel, but he didn't give readers the complex and three-dimensional characters they crave.

Alice is somewhat interesting. Her situation is one readers will be familiar with in a sense, especially historical fiction readers. She has fallen from grace in society circles and is trying to figure out a way to get back in the good graces of the powers that be. Add in the fact that she has an uncanny knack for automation and a has lost some members of her family to the clockwork plague and readers can easily see her plight. Alice could have been a character that soared in this book, but she wasn't. She seemed to fall a bit flat when compared to the rest of the book. She was very undecided in most instances and just didn't seem to grab my interest. Again I think this was mostly due to the huge amount of set up necessary with this book. There is definitely room from improvement with her character and I hope in subsequent book in the series Harper will delve more into who Alice is and what makes her tick.

I was somewhat more encouraged by Gavin's character. Once he and Alice meet and their stories start to converge, the overall story improved quite a bit. This is certainly not a romance novel, but there is romance involved. Gavin is the take charge sort of man and I liked the whole idea of him being a airship captain. Unfortunately, Harper relied a little too heavily on coincidences when it came to things like the reasons for pirates to attack Gavin's ship and details like why Alice inherited a certain object that was key to the plot. Gavin could have been a very striking character, but again Harper falls a little short by spending more time describing why Gavin and Alice need to work together, than describing who Gavin was and where he may fit into Alice's life. Harper does establish that he isn't a peer and has little money and would certainly not be an appropriate match for Alice, but that's about as far as he goes. But there is definitely a spark of what could be.


I think this series has a lot of potential, though this first book could have been better. Readers want to know and love the characters they are reading about and I think The Doomsday Vault leaves a lot of room for improvement in this area. As I said before I give this one a little grace because Harper had a whole lot to accomplish in this first book. The sneak peek at the next book in the series featured at the end, was interesting and I will definitely read it. There was enough here in The Doomsday Vault to make me want to explore further. As I said before Steampunk is not a genre I am extremely familiar with and I have been somewhat jaded by exceptional Steampunk reads, so I may be a little off base, read it and see what you think, I'd love to hear your opinions!


The Doomsday Vault is available NOW from your favorite bookseller. 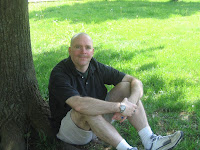 Steven Harper Piziks was born in Saginaw, Michigan, but he moved around a lot. Currently he lives with his wife and three sons near Ann Arbor, Michigan.

His novels include In the Company of Mind and Corporate Mentality, both science fiction published by Baen Books. Writing as Steven Harper for Roc Books, he has produced The Silent Empire series. He's also written movie novelizations and books based on Star Trek, Battlestar Galactica, and The Ghost Whisperer.

Mr. Piziks currently teaches English in southeast Michigan. When not writing, he plays the folk harp, dabbles in oral storytelling, and spends more time on-line than is probably good for him.
Posted by justpeachy36 at 1:00 PM