(Received for an honest from Berkley Prime Crime)


Welcome to Aunt Pat's barbeque restaurant - family run and located in the heart of Memphis, Tennessee. Named in honor of Lulu Taylor's great-aunt, the restaurant on Beale Street dishes out the best that barbeque has to offer. But sometimes even the best food can bring out the worst in people...

Since she runs the hottest barbeque joint in town, Lulu Taylor knows pretty much everyone in Memphis who loves their ribs sweet and their corn bread spicy. But one person she'd rather not know is Tristan Pembroke, a snooty pageant coach with a mean streak longer than the line outside Aunt Pat's. When she finds Tristan's dead body stuffed in a closet at a party, the police are suspicious - especially since Lulu's developed a taste for being in the wrong place at the wrong time. Caught in a situation stickier than molasses, Lulu must clear her name, or risk getting fried...


The Memphis BBQ series by Riley Adams is steeped in Southern atmosphere and culture. The latest book in the series, Hickory Smoked Homicide takes on the Southern tradition of BBQ and pairs it with the latest craze of the pageant world. Author, Riley Adams uses humor and hospitality to create a whodunit that will leave readers more than satisfied. Red herrings, enough twists and turns for maze and one big surprise make this cozy a Southern treat not to be missed!

One of things that I find particularly fun about this series is the atmosphere. Adams is able to give readers a clear idea of what Memphis and Beale Street are all about. Readers are treated to Southern culture with a cast of quirky, off beat characters and ways of doing things. Adams' up front and smooth style is in keeping with the Southern theme and I think readers will appreciate her attention to detail and bits of information about Memphis and it's traditions.


Hickory Smoked Homicide is the third book in the series and can easily be read as a stand alone, but I dare say that many readers will be so intrigued by Lulu Taylor that they will want to go back and read the other books in the series as well. Lulu is sassy, a little loud and full of spunk. She's not your average Southern belle from years gone by, but an updated version that will have readers in stitches. Her amateur sleuthing skills have landed her in some sticky situations and in this book she's dealing with the death of an over-dramatic pageant coach.

With the recent craze for television programs like "Toddles and Tiaras", which shows the pageant world from the inside, readers will not find it hard to believe that some of these pageant parents could get out of hand. I thought this was a timely and current idea that Adams ran with and it certainly provided a good premise for this whodunit. The mystery aspect of the book is well written and tightly plotted. Adams doesn't let a single clue go to waste and there is one big surprise that readers won't even see coming. I liked the big "whammy", it showed some bravery on the part of the author and completely changed my idea of what was going on. Well done!

I recommend this one to cozy fans who also have a penchant for the South. Nothing says Southern cooking like BBQ and when you add murder to the ingredients you can't help but get a great mystery. I like the way Adams adds humor and snappy dialogue to move the plot along and her cast of characters for this one is a lot of fun to read about... poor Sara! She's quite a mess, isn't she? If you haven't tried this one yet, here's your chance!


Hickory Smoked Homicide is available NOW from your favorite bookseller. 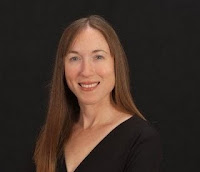 Elizabeth writes the Memphis Barbeque series for Penguin/Berkley (as Riley Adams), the Southern Quilting mysteries (2012) for Penguin/NAL, and the Myrtle Clover series for Midnight Ink. She blogs daily at Mystery Writing is Murder, which was named by Writer's Digest as one of the 101 Best Websites for Writers for 2010 and 2011.

As the mother of two, Elizabeth writes on the run as she juggles duties as Girl Scout leader, referees play dates, drives carpools, and is dragged along as a hostage/chaperone on field trips.

The publisher is sponsoring a giveaway for one copy of Hickory Smoked Homicide by Riley Adams.

~ You must be a Google Friend Connect follower to participate.
~ US Addresses only (Publisher Request).
~ The deadline to enter this giveaway is Midnight EST November 29th.

1. Please leave a comment on THIS post in appreciation to the author.
2. Please fill out the FORM.
Posted by justpeachy36 at 12:00 PM

My daughter would love this book, would like to win it so I can try a cozy mystery, THEN I'll let her have it.

Another new to me author!! I would love to win this book since it's set in Memphis, I have family there and only live about 100 miles from there!!

I've added it to my list of books i want to read.
Theresa N
weceno(at)yahoo(dot)com

I love the fact that this book portrays Southern culture.

thanks for the review, I like that "Adams doesn't let a single clue go to waste
and that it has a "big whammy".
mamabunny13 at gmail dot com

Timely, indeed! I just shake my head at all the pageant hoopla and can see where the parents could/would easily get out of hand. Looking forward to trying this series.
kpbarnett1941[at]aol.com

GFC follower as Karen B.

I love cozy mysteries. I also like that its based in Memphis my favorite place.

I love, love cozies. And before I became a vegetarian, I feel in love with a Barbeque place in Tennessee. I think Tennessee has the best barbeque.

I love books set in the south that make use of the plentiful southern traditions!! This sounds like a really good cozy mystery, and definitely one that I will enjoy reading:)
jwitt33 at live dot com

I am an GFC follower and would love to win this book. Thanks so much.
farrell@crosslake.net

i've been looking to read this book, now for sure i'll have to put it to the top of my list.
jplungas at gmail dot com

I love both of Elizabeth's series. I've been looking forward to reading this latest release one. Food cozies are always a fun read :)

I read the first in the series and really enjoyed it. That southern atmosphere is great! Culinary cozies are just the best!!

Love Cozies of any kind and those with food in them are the best!!

have never read a cozy; but they all have such clever and cute titles!