(Received as a courtesy from the author, Cleo Coyle )


Excerpt from Holiday Grind (Use Look Inside feature)

Synopsis:
When Village Blend manager and head barista Clare Cosi finds a red-suited body in the snow, she adds solving Santa's slaying to her coffeehouse menu.
Clare's grown very fond of Alfred Glockner, the part-time comic and genuinely jollly charity Santa who's been using her coffeehouse as a place to warm his mittens. When she finds him gunned down in a nearby alley, a few subtle clues convince her that Alfred's death was something more than the tragic result of a random mugging - the conclusion of the police.

With Clare's boyfriend, NYPD detective Mike Quinn, distracted by a cold case of his own, and ex-husband Matt "investigating" this year's holiday lingerie catalogs (an annual event), Clare charges ahead solo and discovers this Santa had a list that he was checking twice - and the folks on it were not very nice. Then someone tries to ice Clare, and she really gets steamed...

One thing I like almost as well as a great book, is a good cup of coffee! That's just one of the reasons I am enjoying the Coffeehouse mystery series written by husband and wife team, Cleo Coyle. The eighth book in the series, Holiday Grind is perfect for the upcoming holiday season. It carries just the right amount of humor, brassiness and a great whodunit! Loaded with characters readers have come to love, super holiday recipes and even jolly old St. Nick, this is the perfect holiday mystery read!


Cleo Coyle has had great success with this long running cozy mystery series and Holiday Grind only adds to the series appeal. Coyle has a knack for creating mysteries that showcase New York's Greenwich Village in such a remarkable way. Having never been to New York myself, I confess that this series has definitely made me want to visit. Coyle's descriptive prowess allows readers the sense of seeing, feeling and evening smelling the sights and sounds of the city and I think that gives the series and particularly this book a great sense of place and setting. New York at Christmastime... something I intend to experience one day!


Coyle never ceases to amaze time and time again with fresh and original plots that grab the interest of the reader from the first page. In Holiday Grind, Coyle makes use of Santa Claus to get the gears turning in this mystery. Clare has become friends with a local charity Santa who turns up dead in an alley near The Village Blend. Readers of the series know that Clare's Greenwich Village Coffeehouse is often command central for Clare's amateur sleuthing adventures and it's no surprise that this Santa was into a little more than making toys. The mystery aspect of the book is so well written! Coyle gives the reader everything they need to figure out who the killer is, but also adds in the right amount of red herrings to keep them a little off center until the end. I didn't have it figured out until the author wanted me to and that's the hallmark of a good mystery writer!


Not only does the reader get a great mystery in Holiday Grind but the bonus material at the end is fantastic. Since I've been reading cozies, I have started to really enjoy the sections at the end of most cozies that feature tips, recipes, patterns or whatever pertains to the story. Of course with a coffeehouse mystery you would expect some great recipes. I have begun trying a couple of things from each book and with Holiday Grind I had a hard time choosing. But I finally decided to try "Tucker's Supremely Easy Candy Cane Brownies" and "Mike Quinn's Chery Cordial Fudge." Talk about yummy, those brownies were to die for. You have to try them! And you must try this series if you haven't already!


I recommend this one to all of my cozy readers and this is a great series to start out with if you are just beginning to read cozies. It is light, has a lot of humor and very interesting plots. Holiday Grind is my favorite that I have read in the series so far. I love books with a Christmas theme and this one is really good! I can't say enough good things about it. If you are a coffee fan as well as a mystery reader, you'll love this series!

Holiday Grind is available NOW from your favorite bookseller. 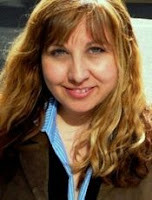 CLEO COYLE grew up in a small town on the outskirts of Pittsburgh, Pennsylvania. After earning scholarships to study writing at Carnegie Mellon and American Universities, she began her career as a cub reporter for The New York Times. Now an author of popular fiction as well as a New York Times bestselling media tie-in writer, Cleo lives and works in New York City, where she collaborates with her husband (also a bestselling author) to pen the Coffeehouse Mysteries. Together they also write the Haunted Bookshop Mysteries under the name Alice Kimberly. In their spare time they cook like crazy, rescue stray cats, drink a lot of java, and hunt ghosts.


~ You must be a Google Friend Connect follower to participate.
~ US Addresses only.
~ The deadline to enter this giveaway is Midnight EST December 9th.

Yea! Another cozy mystery, thank you.

Sounds great. Count me in, please.

I'd love to be entered to win!!

I love coffee in the morning and cozies of course. So, I know I would love this cozy.

I can't believe that this book has been out for a whole year and I hadn't discovered it. Thanks for the contest.
I follow on GFC as Suekey.
farrell@crosslake.net

I am a huge coffee and cozy mystery addict, so this book is right up my alley!! Thanks for the awesome review and giveaway:)

These are the best books, and the recipes are awesome too.

Thank you for this post. I also like how you list the entire series at the end of the post. Cozies are one of my favorite genres to read. I would love a chance to win this book. Thank you.

I have loved this series. Thanks.

I just finished this book yesterday. It was quite enjoyable. Clare Cosi understands the true meaning of Christmas! I would love to try some of the Fa La La Lattes!

Love this series. New to it....but love them!

I am a HUGE fan of this series, as well as the Haunted Bookshop series. These are the best of the genre out there. They are written with an educated reader in mind, but still plenty entertaining and fun. I would love to receive an autographed copy, thanks for the giveaway and the chance to enter!