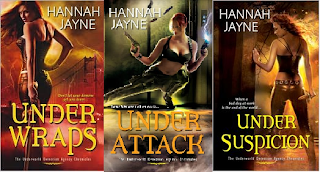 Excerpt from Under Attack


She's one of the Underworld Detection Agency's best. But her job is really starting to bite...


Sophie Lawson is a human immune to magic, which comes in handy for helping paranormal beings transition into everyday life. But fallen angel Alex Grace and his search for the Vessel of Souls is one curse she never saw coming. Suddenly an unexplainable string of killings and destruction has even San Francisco's demons fearing for their immortal lives. And Sophie isn't about to trust Alex's all-to-vulnerable charm or his secret agenda. Now their hunt is revealing dangerous secrets about Sophie's past, and a malevolent power hellishly close to turning one irreverent human into the ultimate supernatural weapon...


The second book in the Underworld Detection Agency series, Under Attack once again gives a lighter edge to Urban Fantasy. Hannah Jayne has created world populated by supernatural creatures including fallen angels, demons and vampires, but Sophie the heroine of Under Attack is a human immune to magic, rare and full of surprises. Jayne is able to keep this book from becoming mire down with witty dialogue and wacky, ingenious characters. Jayne's take on the paranormal is refreshing and original!

When I requested Under Attack for review I think I was somewhat disillusioned by the cover art. The cover is absolutely gorgeous, but I don't think it truly reflects the story. Sophie isn't an agent with the Underworld Detection Agency, she is more of a customer service rep for San Francisco's demon population. But the discrepancy with the cover did not take away from the amazing book, that Jayne has here. The premise of the book is unique and intriguing and I think readers will find themselves not paying attention to the little things, when the overall story is sooo good!

I am a huge fan of Urban Fantasy but as many readers can attest, Urban Fantasy tends to be dark and somewhat foreboding. It is not a happy-go-lucky sort of sub-genre, but Jayne proves with this series, and in particularly with this book that humor certainly has a place in this type of writing. There were some really heavy moments that were lightened by zingers and one liners that had me giggling or smiling a lot during this read. I think a writer can go too far in either direction, too serious or too light, but Jayne strikes just the right balance in Under Attack to appeal to the readers.


Jayne's characters are a little off the hook. They have their wacky moments but if you think about it, isn't that the kind of friends that you care about the most, the ones who don't take you so seriously? I think that was what Jayne was going for with this eclectic mix of characters. Sophie is a great character. She has a lot of charisma and what I could call hutzbah. She has sass or what some might call "balls" LOL! I liked her a lot, though she does a fair amount of crying in this one. Her job is on the line, her on again off again boyfriend who happens to be a fallen angel has returned, see finds out a bunch of family secrets and she has a dark angel after her, I guess she a reason to be somewhat stressed. I loved her best friend who happens be to be a vampire and even her uptight new boss has his moments.

This is a series I can definitely recommend. As I have been reading more paranormal romance and Urban Fantasy, the differences between the two sub-genre's has become very apparent. I like both a lot and I this is such a good example of what Urban Fantasy can be. I think readers who want to start reading Urban Fantasy could start with a series like this one. At this point it only has two books and readers can easily catch up before the new installment hits the shelves in 2012. It can possibly break readers in a little bit and introduce them to the sub-genre without overwhelming them. If you like your supernaturals with a sense of humor this a good series for you! I loved this book and can't wait for the next one!


Under Attack is available NOW from your favorite bookseller.


When she's not battling the demons of the Underworld, Jayne shares a house with two neurotic, feet-attacking cats, and like her character Sophie Lawson, has a Kryptonite-like weakness for donuts.