Review and Giveaway: Herald of Death


Excerpt from Herald of Death


The landscape of the Pennyfoot is covered with splashes of rich reds and greens for the holidays. That should not include blood. However, a killer is on the loose, bent on ending some residents' good times...


The Christmas Angel is a welcome sight during the winter season - but not this year. A killer is afoot in Badger's End, cutting a lock of hair from the victims and sticking a gold angel on their foreheads. Cecily Sinclair Baxter already promised her husband that she'd take a hiatus from sleuthing. But three killings have created a blizzard of bad publicity - and guests are canceling their hotel reservations.


Cecily pokes around, but the victims seem unrelated. Then the killer claims a fourth and fifth victim, obviously not slowing down for the holidays - so neither will Cecily. She will have to stop the angel of death from striking again, leaving murder under the tree...


Author Kate Kingsbury brings readers another Special Pennyfoot Mystery, set once again at Christmastime. Herald of Death, is an English cozy that will delight cozy fans this holiday season. Readers familiar with the long standing Pennyfoot Mystery series will love the latest tale of the upstairs, downstairs crew from the Pennyfoot hotel. Kingsbury continues to delight fans with well thought out mysteries that will challenge and entertain for hours.


In the latest adventure at the Pennyfoot, Cecily prepares for the holidays with decorations and visions of the perfect Christmas, but several murders in Badger's End put a damper on the festivities and cancellations begin to pour in. Kingsbury is a talented author that is able to bring out the Christmas spirit in her readers with well crafted holiday mysteries. The killer in Herald of Death is anything but typical and the clues pile up quickly as Cecily must convince her husband to let her out of her promise to stop detecting before there are no customers left. Kingsbury gives readers a serial killer in this one with more bodies than readers will know what to do with.

The action starts a little slower in this one that most, but I find that, that is typical of English cozies. They just don't seem to get in a hurry, which allows the author to explore the back stories of the characters a little more thoroughly than in some cozies. But once it cranks up, there's no turning back. Cecily is a great example of an amateur sleuth. She always finds herself right in the middle of one mis-adventure after another, but she always seems to come out on top and solve the crime in the process. Kingsbury has created a heroine that is enduring, as well as, endearing. Cecily has delighted readers in close to thirty Pennyfoot Mystery books and continues to provide enjoyment in this extensive series. She is a sassy English lady that appeals to the audience with her clever ideas and instincts. I think Kingsbury did a great job with character and I look forward to reading many of the other books in the series.

I liked the interaction between Cecily and all of the people at the Pennyfoot and in Badger's End. The setting in this quaint English village will appeal to readers who like the small town feel of most cozies. The British vibe is very apparent and sets the stage for murder. Cecily has a list suspects a mile long and each one is more interesting than the last. I liked the way that Kingsbury developed each character with even the smallest mention in the book. She gives each one a personality and a story and that takes a lot of forethought and work. I appreciated her diligence and commitment to the story and thought she pulled it off well. I found myself so interested in the characters that I didn't want the book to end even after the killer was finally revealed.

This was my first Pennyfoot Mystery but it won't be my last. The mystery aspect of the story was well thought out and executed. I had absolutely no idea who had done it until very close to the end. The motive was also a surprise that was very satisfying. The twists and turns abound in this one and the Christmas theme made it all the more interesting. I love books set during the holiday season and this one would be great for cozy weekend in front of a roaring fire with a cup of hot chocolate nearby. I recommend it my cozy readers and will probably add it to my list of holiday favorites.


Herald of Death is available NOW from your favorite bookseller. 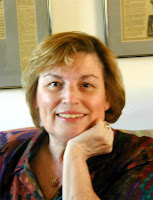 I grew up in London, England, and at a very early age began telling stories to my school friends during the London Blitz of WW II while huddling in bomb shelters. I moved to the U.S. in the early sixties, and had passed my 50th birthday when I published my first book. Since then I've written over fifty romance and mystery novels. I have one son, and married for the second time shortly after my 60th birthday.

The publisher is sponsoring a giveaway for one copy of Herald of Death by Kate Kingsbury.

~ You must be a Google Friend Connect follower to participate.
~ US Addresses only (Publisher Request).
~ The deadline to enter this giveaway is Midnight EST November 17th.

1. Please leave a comment in appreciation to the author on THIS post.
2. Please fill out the FORM.

Thank you for doing this interview and the giveaway!

I am a GFC follower.

I have heard of this series but have not yet read it. Now is a good time to start.

thank you for this giveaway!!!
already on my WishList!!!!

I like that it's a Christmas mystery.
mamabunny13 at gmail dot com

Always pleased to see another holiday Pennyfoot story! I am not read to say goodbye to these characters! Thanks!
JHolden955(at)gmail(dot)com

I hadn't heard of this series before, but now that I have I really want to read all of the books! I also really love Christmas cozy stories, so thanks for this amazing giveaway:)
jwitt33 at live dot com

Thanks for the interview. I enjoy holiday based books and this one I would enjoy reading

I love that this book has a holiday theme. It's always fun to get you in the mood for the season. I've had this series on my list & will have to move it up to the top as your review confirms that it will be something I will enjoy. Thanks for the giveaway :)