Review: Magic on the Line

Magic on the Line (Allie Beckstrom - Book 7) by Devon Monk


Allie Beckstrom has willingly paid the price of pain to use magic and has obeyed the rules of the Authority, the clandestine organization that makes - and enforces - all magic policy, but when the Authority's new boss, Bartholomew Wray, refuses to believe that the sudden rash of deaths in Portland could be caused by magic, Allie must choose whether to follow the Authority's rules or turn against the very people for whom she's risked her life.


To stop the plague of dark magic spreading through the city, Allie must put all that she values on the line: her magic, her memories, her life. As dead magic users rise to feed upon the innocent and the people closest to her begin to fall. Allie is about to run out of options...


Devon Monk once again thrills readers with her latest Allie Beckstrom novel, Magic on the Line. Seventh in a series of nine books, Magic on the Line is gearing up for the final show down, the gears are starting to turn and readers will feel the ramped up energy in this book. Monk has created a world that is full of magic and mayhem. Allie has always adhered to the rules of the Authority, the governing body of magic, but in this book she is forced to decide whether to do what she knows is right or whether to keep between the lines of what the Authority wants.

If you haven't a chance to start this series I can't encourage you enough. Each book could be read separately, but you will miss so much with this particular series. The back story is very important and readers will feel a little lost if they are just starting the series now. Strangely enough this is one of those series' that has gotten better and better as the books go on. Devon Monk's world building skills are phenomenal and she has crafted a set of characters to populate that world that are complex and full of emotion and passion. I think Monk's characterizations are the biggest part of the appeal in her books.

In Magic on the Line, Allie once again shows readers what it means to be loyal, honest and hard working. She is a character that has captured the interest of Urban Fantasy readers and she just wont seem to let go. She is stubborn and exasperating at times and yet she is a kick-ass heroine. She's very no nonsense and I liked that about her. Magic is everything in Allie's world and it is literally killing everyone. Her magic is making her sick, yet she uses it to make her world a better place.

In this novel she up against not only a serial killer, who is using a magical plague to kill, but also the new man in charge of the Portland Authority. When he won't see reason, Allie may have to make the devastating choice to go against the Authority and make herself and her friends outlaws in order to have the people around her. How's that for pressure? The suspense in this book is nearly overwhelming at times. I was biting my nails and I haven't done that since I was a kid! When it comes down to wire at the end, Monk throws in a heck of a cliff hanger that will have readers salivating until the next book in the series comes out.

One of my favorite of the whole series and this book in particular is the secondary characters. Zay, Allie's love interest has been a favorite of mine for awhile but I am becoming more taken with both Shame and Terric especially after reading Magic on the Line. The relationship between these two is riveting and readers will have a hard time trying to figure out what will happen with them. Monk has a real knack for creating engaging fully developed characters including the supporting cast which has a story all it's own.


I recommend this one to Devon Monk fans and Urban Fantasy lovers, but I definitely encourage you to read the whole series, this is one of the best out in the Urban Fantasy category. The series is reminiscent of Jim Butcher's, The Dresden Files, with that underlying feeling that there is so much more than what meets the eye and Allie is going to find it. I loved the fact that Monk makes Allie field some really hard choices in this book showing her more than just a follower, she's a leader and does what needs to be done. Great addition to the series!


Magic on the Line is available NOW from your favorite bookseller. 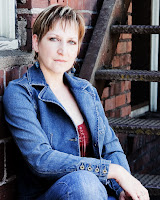 Devon Monk has one husband, two sons, and a dog named Mojo. Surrounded by numerous colorful family members, she lives in Oregon. She has sold more than fifty short stories to fantasy, science fiction, horror, humor, and young-adult magazines and anthologies. She has been published in five countries and included in a year's-best fantasy collection.
Posted by justpeachy36 at 9:00 AM