City of Dragons by Kelli Stanley

(Received for review from St. Martin's Press, via the author)

It's Miranda Corbie's city... and she'll die to protect the good in it. Because part of her died a long time ago.

The cops want the killing covered up. All Miranda wants is justice - whatever it costs. From Chinatown tenements to a tattered tailor's shop in Little Osaka to a high-class bordello draped in Southern Gothic, she shakes down the city - her city - seeking the truth.

With City of Dragons, award-winning author Kelli Stanley takes you on a tour of a San Francisco both familiar and strange, as beautiful as a golden bridge across the Bay and as sordid as a strangled escort in an abandoned grave.

Award-winning author, Kelli Stanley shows us San Francisco like we've never seen it before. With heart-stopping action and intrigue that starts on the first page and doesn't end until you turn the last! Stanley's knack for creating a setting that will take the reader back in time, is at it's best in City of Dragons. 1940's San Francisco was filled with dark places and even darker people and that's not just in Chinatown.

Miranda Corbie isn't your average private investigator. She's a tough, streetwise woman on a mission. She was once a Spanish Civil War nurse and a former escort. She can get into places that most people wouldn't take a chance on, where others fear to tread. San Francisco's Chinatown still holds the homeland close and they realize what their countrymen are going through with the Japanese. They decide to through a Rice Bowl Party in order to drum up support and money for the war effort in China.

Miranda is enjoying the carnival when she finds a man lying in the street, dead. Miranda must find out who he is and who killed him before it's too late. Taking on another case at the same time, Miranda soon finds that the two cases are inexplicably linked. Will Miranda be able to find the killer before another victim pays the price?

This is a great historical mystery! Kelli Stanley has a very intellectual style. Her writing has a lot complex nuances that the reader will really enjoy. She brings 1940's San Francisco to life with vibrant descriptions of the people and the places that Miranda Corbie comes into contact with. I loved the way the author was able to let us find out about the main character through flashbacks from her past and the Spanish Civil War. As a reader it was like I was right there seeing what happened through the eyes of the character. It was a very dramatic effect.

Stanley gives us a very strong character with Miranda Corbie, a woman with a past that she isn't trying to outrun, but trying to accept and move forward. As a character she gives off an aura of strength and determination to make San Francisco a better place and to create a better life for herself as well. She is the no nonsense type who is able to get things done without questioning her instincts and her abilities. I found her a very interesting character and I look forward to reading more about her.

This isn't a book for the faint of heart. It's full of action and mystery and everything that goes along with it. I would recommend this one to hard core mystery fans, thriller lovers and those who like to combine history with mystery and suspense. It's a very well written book, with a solid plot and very strong character development. The setting is phenomenally written, you feel like your walking the streets of Chinatown in the 1940's from the first page.

City of Dragons is available NOW from your favorite bookseller. 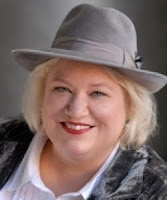 Kelli Stanley is the author of the critically acclaimed Nox Dormienda, which won the Bruce Alexander Award for best historical mystery and was nominated for a Macavity Award. She lives in San Francisco, California.