Review: Women on the Verge of a Nervous Breakthrough

Women on the Verge of a Nervous Breakthrough by Ruth Pennebaker

Joanie's ex-husband is having a baby with his new girlfriend. Joanie won't be having any more babies, since she's decided never to have sex again.

But Joanie still has her teenage daughter to care for. And thanks to the recession her elderly mother, too. Joanie's back in the workforce - at an Austin ad agency - trying to support them all. Her daughter texts unceasingly and her mother brags about "Goggling," but Joanie is still trying to figure out her office computer. And how to fend off her coworker Bruce, since she's decided to never have sex again.

Joanie, Caroline, and Ivy are stuck under the same roof, and it isn't easy. But sometimes they surprise each other - and themselves. And sometimes it's possible to undo the mistakes of the past, like deciding never to have sex again...

Ruth Pennebaker's novel, Women on the Verge of a Nervous Breakthrough is a book about women. Three women in fact, from three different generations, trying to live together and understand each other, sound impossible? Pennebaker gives the reader a lesson in family dynamics and combining how we see ourselves with how others see us.

Joanie is middle-aged woman who has sworn off sex, since her ex-husband left her for a younger woman, who is pregnant with his next child. Her job at a local ad agency is a 'token' position. Her daughter, Caroline thinks her mom is a loser, but has her own problems, having few friends and flat chest. Joanie's mother, Ivy has come to live with them in Austin due to the recession and doesn't quite know what to make of her new surroundings. Three women, three generations and one family. Everyone is wrapped up in their own problems and they don't have time to try to emphasize with the others.

This was a very interesting book about the family dynamic between three women in one family forced to live under the same roof, while being totally wrapped up in their own problems. Ruth Pennebaker does a wonderful job of letting the reader get in the heads of her characters. She has developed characters that are easy to identify and most readers will find themselves in the character or someone they know.

I thought it was really interesting how the characters related to each other. Joanie was so concerned with her problems at home and work that she totally discounted her mother's painful transition to a new city and a new home. Caroline, Joanie's daughter has convinced herself she can't get a boyfriend because she has a flat chest and doesn't have time to worry about her mom's problems at work or her dad's new baby on the way. Ivy has moved to a new city and further away from her favorite son and her grandchildren. Joanie just see's her as critical and clearly none of these women are seeing anything that's going on in the lives of the others.

It was interesting to read about how they finally begin to see themselves as others see them and try to step outside their own problems and notice that others have troubles too. I loved how the author was able to convey that they really did care about each other and that made me care even more about the characters. Pennebaker did a great job with character development, though I did feel her supporting cast lacked a bit of description.

This is really a story about getting along with each other and not being so wrapped up in ourselves that we can't see what's going on with other people. It's also about how women relate to each other and how family dynamics work. I enjoyed the book and would recommend it to those readers who love chick lit and stories about families. I thought Pennebaker was able to really show us how her characters felt and that made all the difference.

Women on the Verge of a Nervous Breakthrough is available NOW from your favorite bookseller.

I'm giving this 3 out of 5 apples from my book bag! 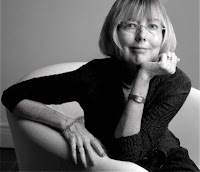 Women on the Verge of a Nervous Breakthrough is Ruth Pennebaker's first adult novel. She's also written three highly acclaimed young-adult novels: Don't Think Twice, Conditions of Love, and Both Sides Now, as well as essays and articles for The New York Times, The Dallas Morning News, Texas Observer, Parents, Redbook, McCall's, Cooking Light, and other national publications. She is a commentator for KUT, Austin's Public radio station, and the author of A Texas Family Time Capsule, a collection of her favorite columns.

Ruth lives in Austin, with her mad-scientist husband, the scattered memorabilia of their adult daughter and son, and a neutered cat named Lefty. Her hobbies are reading, yoga, social criticism, and free-form worrying.
Posted by justpeachy36 at 9:00 AM

I'm so glad you enjoyed it! I love books about family dynamics because everyone can relate, no matter what their family situation.

Debbie -- Thanks so much for taking the time to review my novel. -- Ruth Pennebaker

Ruth, Thanks for stopping by. I really enjoyed your book. Family dynamics is such an interesting subject to me...

I'm glad you enjoyed this! I'm getting my review ready for this upcoming Monday and really liked it. Not all family dynamics books work but I thought that this one did.