(Received for a guest review on Cherry Mischievous' Blog) Check it out!

Excerpt from Dark Lover
Book Trailer: This is a fan made trailer, which I liked a lot!

In the shadows of the night in Caldwell, New York, there's a deadly turf war going on between vampires and their slayers. There exists a secret band of brothers like no other - six vampire warriors who are defenders of their race. Yet none of them relishes killing more than Wrath, the blind leader of the Black Dagger Brotherhood.

The only purebred vampire left on earth, Wrath has a score to settle with the slayers who murdered his parents centuries ago. But, when one of his most trusted fighters is killed - leaving his half-breed daughter unaware of his existence or her fate - Wrath must usher her into the world of the undead - a world beyond her wildest dreams...

I had been hearing about The Black Dagger Brotherhood for a long time and when Cherry Mischievous was offering the book for a guest review on her blog, I decided to give

it a try. She sent me a copy of the book with the gorgeous UK cover. I decided to post the US cover on the main part of the review because most of my readers are in the US, but I wanted you to see this beautiful UK cover as well.

Wrath is the blind leader of the Black Dagger Brotherhood, a collection of warriors who are charged with protecting the vampire race against vampire slayers. When Darius one of Wrath's closest friends and warriors is killed, Wrath knows that he is probably the only person who can protect and save Darius's daughter. Beth has no idea she's about to go through a change that could end her life without help from another vampire. Beth is a half-breed, her mother human and her father a vampire. It is uncertain if she will survive without the blood of a purebred vampire. Wrath isn't prepared for the feelings he begins to have for Beth and he will stop at nothing to protect her and make her his queen.

I fell in love with J.R. Ward's writing style from the very first page. Sometimes when I first start reading a book it takes me a little while to warm up to to, and then there are some that just grab my attention and I know they are going to be novels that I won't soon forget, Dark Lover was definitely one of these. It was engrossing and hard to put down. I stayed up long into the night reading it and I can't wait to read Lover Eternal the second book in the Black Dagger Brotherhood series.

Ward had a very different idea of vampires than I was used to and I thought it was refreshing and interesting. Most of the books I have read portray vampires feeding only on humans. I found it very intriguing that Ward's vampires fed on the blood of the opposite vampire sex. Male vampires feeding on female vampires, etc. The whole vampire world in this book was engaging and I found myself looking forward to the parts of the novel that told more about their world and how it functioned.

Instead of fighting against humans, the vampires were up against vampire slayers or lessors. The dregs of society who have basically given their souls for the opportunity to kill vampires and wreck havoc on the world. Mr. X is one of the leaders of the lessors, but there is a higher power, so to speak, called the Omega. The vampires have a overall leader as well called the Scribe Virgin. All of this was so new and interesting that I just fell in love with the book and the series.

The Black Dagger Brotherhood itself is made up some really cool characters. Wrath the leader and the King is blind. I thought that was a genius move by Ward. He was a big, strong man, but he had this serious vulnerability that made him seem less daunting. He was strong in spite of his disability. He was the ultimate brooding hero. His relationship with Beth was full of heat. The love scenes were well written and not full of a lot of unnecessary stuff. Beth is definitely are great character as well. She holds her own against a supporting cast of warriors. She is determined and fearless.

The other brothers are introduced in this book as well. Rhage has a beast within him that takes over and basically destroys most anything in his path. I can't wait to learn more about him. Vicious is the computer mastermind, but his touch can kill. Each warrior has his own little problem. Phury and Zadist are twin brothers, Phury has taken a vow of celibacy, hard for a vampire, I'm sure and Zadist is full of anger and a little madness from being a slave, but he has the voice of an angel. My favorite was Torhment. He was more laid back than the other brothers and added a lot of strength to the cast. He seemed the most level headed.

I can't tell you how much I enjoyed this one. It was a wonderful new look at vampires. I can't wait to read more from J. R. Ward. I loved her style and her world building skills. Her backstories for the characters were well done and did not take away from the Wrath and Beth's story. It just gave the book more depth. I would recommend this book to anyone who loves paranormal romance or vampire stories. It's a different perspective on a very popular myth.

Dark Lover is available NOW from your favorite bookseller.

I'm giving this one a very big 5 out of 5 apples from my book bag! 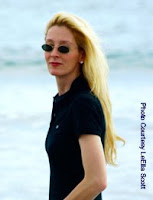 J.R. Ward lives in the South with her incredibly supportive husband and her beloved golden retriever. After graduating from law school, she began working in health care in Boston and spent many years as chief of staff for one of the premier academic medical centres in the nation.
Posted by justpeachy36 at 11:51 AM