(Received for an honest review from St. Martins)

Excerpt from Vampires Dead Ahead


In the acclaimed Night Tracker series by New York Times bestselling author Cheyenne McCray, the vampires are back to make a brand-new start of it - in old New York...


With zero tolerance for bloodsuckers, Nyx and the Trackers have made the streets safer for warm-blooded New Yorkers. Unfortunately, they didn't drive a stake through the problem nationwide. Vampire attacks are on the rise. Proctors are dropping like flies. And Volod - New York's ousted Master Vampire - is trying to make a comeback...


Nyx is worried - about her city, her job, and her neck. But mostly she's concerned about her former lover, Rodan, a Proctor who's gone missing. Scarier still, Volod is capturing and "turning" paranorms to help him paint the town red. Which sucks. Because some of these new vampires are Nyx's old friends. But, hey - if she can stake them here, she'll stake them anywhere..


Vampires Dead Ahead is the highly anticipated fifth book in the Night Tracker series by Cheyenne McCray. This is a series that has delighted fans with it's kick-ass heroine and her penchant for all things paranormal. Nyx Ciar, is a dark elf with a feisty attitude, who seems to find herself in some of the worst of circumstances, much to the delight of readers. McCray's trademark unique characters once again steal the show in this book that will have readers on the edge of their seats!


Vampires Dead Ahead brings back one of Nyx's old foes, Volod, the Master Vampire. As Nyx and her human counterpart Olivia are hard at work trying to figure out why several Trackers have disappeared, they are stunned to find out that their old nemesis may be behind it all. Volod has set his sights on a new beginning in New York and it's up to Nyx to thwart his plans. I loved the fact that McCray brings back one of the former bad guys in this one, proving that Volod might have been down but he certainly wasn't out for the count. It was interesting to see how Nyx reacts to this new development. She's been through a lot with this guy, but she does know what he is capable of. Better the enemy you know, that the one you don't!


Nyx is such a great character to begin with. She has grown by leaps and bounds since the beginning of this series. She's been through a lot but is still the strong, determined woman we met in Demons Not Included. In this installment of the series, she has a lot on her mind. She is determined to protect New York from Volod, she will not let him take her city. But she is torn between what's going on with Volod and her feelings for her former lover and boss Rodan, who is among the missing Trackers that have disappeared. Rodan is someone Nyx has a soft spot for and she just can't leave him to his fate. I liked the fact that McCray shows that underneath all the bravado, Nyx is a woman, with the same feelings and longings as any other.


The whole idea that Volod has somehow figured out a way to "turn" other paranorms, was a fantastic premise, that opens the series up to a lot of new possibilities. It certainly shifts the balance of power. Trackers are essentially the paranormal police force. They keep the peace and make sure that villains like Volod don't become too powerful. But with this change in the scheme of things, Volod may hold all the power. I liked how the author is able to add in new ideas and themes that could potentially take the series in a new direction, which is always good for a long running series. I'm looking forward to what's to come from McCray and I think readers will too.


Vampires Dead Ahead is a great addition to the Night Tracker series. I recommend it to fans of McCray and Urban Fantasy readers. Even though it fifth in the series, it can be read as a stand alone, but I guarantee it will make you want to read more about Nyx and the Trackers!

Vampires Dead Ahead is available NOW from your favorite bookseller. 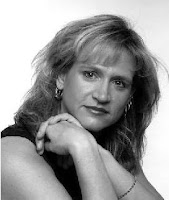 Cheyenne McCray would give just about anything to run away with Jason Bourne to any foreign country (minus the getting shot-at part) or visit an Otherworld realm. Either one, she's so there.


A multiple award-winning author, Chey grew up on a ranch in southeastern Arizona. She has been writing ever since she can remember, back to her kindergarten days when she penned her first poem. She always knew one day she write novels, hoping her readers would get lost in the worlds she created, just as she experienced when she read some of her favorite books.


Chey has three sons, two dogs, and is an Arizona native who loves the desert, the sunshine, and the beautiful sunsets.
Posted by justpeachy36 at 9:00 AM