Review: All That Bleeds

All That Bleeds (Etherlin - Book 1) by Kimberly Frost


Excerpt from All That Bleeds


Within the elite community of the Etherlin, the descendants of the ancient muses are inspiration made flesh. But beyond the wall protecting their world wait the fallen, those who yearn to possess them...


As the last heiress of the House of North, Alissa has never been one to follow laws blindly. Striking up a secret friendship with a half-vampire enforcer is dangerous, but Merrick is a temptation she can't resist.


Merrick's desire for Alissa consumes him, though he knows better than to pursue a muse. But when Alissa is kidnapped and brought outside the Etherlin walls, Merrick will do anything to protect the woman who tempts him with her very existence.


As enemies from both worlds threaten, Alissa realizes that Merrick is the only one she can trust - even while the pull she feels toward him is the thing she fears most...


Forbidden love. Who could resist a paranormal romance with that kind of theme? Kimberly Frost brings readers the first book in a new series featuring the Muses who lend their energy and powers to inspiring artists, musicians and other creative elements in society. All That Bleeds is quite a departure from Frost's Southern Witch series and has darker more ethereal feel to it. Even the cover is striking and readers will love Frost's amazing world building skills.


The first book in the Etherlin series was a totally unexpected read for me. I was expecting the tone and atmosphere of the book to mirror Frost's first series, but I was totally blown away with this one. The world building alone is enough to make this an amazing book. Frost draws readers in from the first action packed pages and introduces them to a world where the Muses are competing amongst themselves for the Wreath, a magical element that will allow them to focus their powers. I was taken aback by the back biting and the politics that went on among the Muses and sympathized with Alissa the lead character in dealing with all of it.


Alissa was a great character. She knew her own mind and she knew what she wanted to do and how to make it happen. I liked her ingenuity and her forthright attitude. I also liked that part of her led her make friends with someone she should have stayed away from. Merrick is a bad, bad boy, but he's darn good at it. She didn't let anyone choose her friends for her and she stood up for what she thought was right. I liked her a lot.


Merrick was the perfect hero. Very confident and sure of himself. Extremely loyal. When he decided to protect Alissa, he would move heaven and hell to do it and I liked that tenacity and kick-ass attitude. Nothing or no-one was going to get the best of him. He may have flouted authority and done things his own way, but he knew what he was about and he wasn't changing for anyone.


The romance that blossoms between Alissa and Merrick is completely forbidden. He is a vampire enforcer and she is a Muse. Not everyone's ideal match made in heaven. I liked the fact that Frost allows the relationship to grow and change instead of opting to make them soul mates or having some kind of unflinching bond. Their relationship was tender, authentic and very real feeling. That made it so much better in the long run.


I liked the mystery elements surrounding the death of Alissa's mother also. There was a lot of violence and the pace of the book was chalked full of action. There was never a quiet moment in this one and I felt like I was in a whirlwind reading it. The end was satisfying and sets up the next book in the series well. I think this series has a lot of potential and readers of both romance and paranormal romance will enjoy it. Can't wait to see what happens next.

All That Bleeds is available NOW from your favorite bookseller. 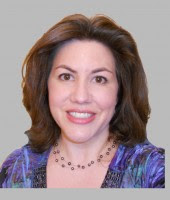 Kimberly Frost is the national bestselling author of the humorous Southern Witch series, which includes Would-Be Witch, Barely Bewitched, and Halfway Hexed. She was the 2010 PEARL award winner for best new paranormal author, and her paranormal romantic suspense "Etherlin" series launched in November 2011 in the multi-author Christmas anthology, Tied With a Bow, followed by the January 2012 release of All That Bleeds (Etherlin Series, Book 1)