Review: A Demon Does it Better

A Demon Does it Better (Demon - Book 2) by Linda Wisdom 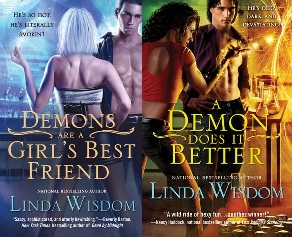 Excerpt from A Demon Does It Better (Amazon Look Inside Feature)


A MADHOUSE IS NO PLACE FOR A CURIOUS WITCH...

After more than a century, Doctor Lili Carter, witch healer extraordinaire, has returned to San Francisco and taken a job at Crying Souls Hospital and Asylum, where strange and sinister things are happening. Patients are disappearing, and Lili wants to know why.


AND DOUBLY DANGEROUS FOR A DEMON...

Lili finds herself undeniably attracted to perhaps the most mysterious patient of all - a dangerously demented and seriously sexy demon named Jared. What's behind the gorgeous chameleon demon's bizarre disappearances?


Before long, Lili and Jared are investigating each other - and creating a whole new kind of magic.


Author Linda Wisdom is known for her light approach to the paranormal. A Demon Does it Better is the second book in Wisdom's demon series and fans of her work will certainly not be disappointed. Wisdom fills her book with paranormal characters of all kinds, including main characters Lili, a witch and Jared a Shadow Demon. Wisdom's trademark wit and humor gives this book a zany feel that readers are going to love.

Linda Wisdom is a favorite of mine. After reading and reviewing her book Demons are a Girls Best Friend, I went back and read several other books by the author and was immediately struck by the amount of humor and wit that she instills in all of her writing. Wisdom must have a great sense of humor because a lot of her characters certainly do. I liked the way that she takes a genre that tends to lean a little toward the dark side and livens it up with witty banter from the characters and comic relief in the form of wacky secondary characters like Cleo, Cleopatra re-incarnated, in, A Demon Does it Better.

The second book in the Demon series is also a part of a larger series that features Jazz Tremaine and her witchy friends. The main character in A Demon Does it Better, Lili is also a witch and was excluded from the Academy like Jazz and several others. Lili is very single minded, she gets something in her head and she just can't let it go, like finding out what happened to her friend Sera who was working at a mental asylum that Lili herself used to work at. Lili is a doctor, a healer, and one kick-ass heroine. But she has a heart for healing and once she's inside the asylum she finds herself more interested in the patients than she thought she'd be, she wants to help them all, which is a great characteristic for a heroine.

Jared is everything readers want in a great paranormal hero. He is unique, he's handsome, he's dark and mysterious. I liked the fact that he was supposed to be extremely dangerous, there is a kind of power or commanding presence that radiates off him. He is a contained force and it's easy to see that he is going through hell. But he isn't so far lost in his own pain that he cannot respond when someone shows him kindness and initially I think that's what draws him to Lili. The passion between them is intense and provides some really great sexy moments, but there is also a lot of romance and tenderness between these two. I liked the balance that Wisdom is able to keep between the two aspects of their relationship.


The character development was excellent and the wit and humor sets this book apart from a lot of other paranormal romance titles. But another thing I liked was the fact that Wisdom allows characters from her other books to have cameo roles in this one. There is an appearance from the Hellion Guard that was a big part of the first book in the series, as well as, other faces that Wisdom's fans will be familiar with. This book has a lot going for it and I think readers are going to love it and be on the look out for the next installment. It's the lighter side of paranormal and it's very appealing.


A Demon Does it Better is available NOW from your favorite bookseller.

Linda Wisdom was born and raised in Huntington Beach, California. She majored in journalism in college, then switched to fashion merchandising when she was told there was no future for her in fiction writing. She held a variety of positions, ranging from retail sales to executive secretary in advertising and office manager for a personnel agency.


Her career began when she sold her first two novels to Silhouette Romance on her wedding anniversary in 1979. Since then she has sold almost eighty novels and two novellas to five different publishers. Her books have appeared on various romance and mass market bestseller lists and have been nominated for a number of Romantic Times awards. She has been a two time finalist for the Romance Writers of America Rita Award.


She lives with her husband, one dog, one parrot and a tortoise in Murrieta, California.

When Linda first moved to Murrieta there were three romance writers living in the town. At this time, there is just Linda. So far, the police have not suspected her of any wrongdoing.
Posted by justpeachy36 at 10:30 AM

This sounds so good! I can't wait to read it!