CoverARt: Click on the picture for a larger, clearer view of the covers in this series. 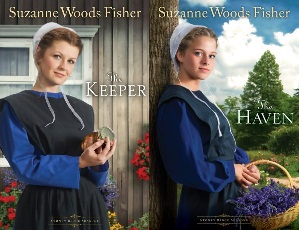 Excerpt from The Keeper

A FAMILY, A FARM, A HEART, ALL IN NEED OF REPAIR.

Life on Windmill Farm hasn't been the same since Julia Lapp's father has had trouble with his heart. But that doesn't stop Julia from hoping for a bright future. She has planned on marrying Paul Fisher since she was a girl. Now twenty-one, she looks forward to their wedding with giddy anticipation. But when Paul tells her he wants to postpone the wedding - again - she is determined to change his mind. She knows who is to blame for Paul's sudden reluctance to wed: the Bee Man.

Roman Troyer, the Bee Man, travels through, the Amish communities of Ohio and Pennsylvania with his hive full of bees, renting them out to farmers in need of pollinators. A mysterious man who relishes his nomadic life, Roman especially enjoys brings his bees to Stoney Ridge each year. But with Julia seriously at odds with him, Windmill Farm is looking decidedly less appealing.

Can Julia secure the future she's always dreamed of? Or does God have something else in mind?

Suzanne Woods Fisher once again takes readers on a journey into the heart of an Amish community in her latest book, The Keeper, book one in her new Stoney Ridge Seasons series. Fisher is considered by many, one of the best in Amish fiction writing. Her patient story building and constant attention to detail make Fisher's books a must read for Christian fiction and inspirational fans.

Many of you may have seen the reviews I did for Suzanne Woods Fisher's Lancaster County Secrets series. It is probably obvious that I really enjoy Suzanne's work and find her writing both charming and inventive. I have been reading Christian fiction for a lot of years and when I find an author that I really like it is usually one that I stick with. Suzanne Woods Fisher is definitely one that is on my auto-buy list. She has a way of writing that just seems to stick with a reader. She has a message and she conveys it through her writing. She isn't pushy about it, nor does she overwhelm the reader with her values, subtlety is a virtue in this case and Suzanne Woods Fisher uses it well.

One of the things that I really liked about this particular book was that it didn't follow the typical Amish fiction pattern. In most Amish fiction books the story is usually the same. Boy likes girl or girl likes boy, either way. One of the two isn't satisfied with the Amish life and either leaves for a while and comes back or decides to stay away. Not in this book! Suzanne Woods Fisher's characters are Amish and their happy with it. In a way that was really refreshing. There was no "there has to be something more to life" kind of plot. It was certainly more realistic and showed a clearer look into the Amish way of life. These are people who do things the way they do them for a reason and this book showed that it can be a satisfying and happy life.

There were a couple of hiccups with this one, but nothing to take away from the overall impression the book made on me. Julia is a good character. She shows herself to strong and capable, taking care of her siblings and her ailing father. But she seems a bit to reliant on her relationship with Paul to give her true happiness. I was glad that throughout the book the author shows that what we sometimes think is God's will isn't exactly what he has in mind. Her happiness wasn't really dependent on Paul at all and I was glad she found that out. Paul was a little too wishy-washy to suit me. He didn't have quite enough backbone. He relied to much on what others were telling him, when he was the one who needed to make the decisions.

Roman was my favorite character for a lot of reasons. He has some secrets of his own including a tragic family accident that starts him on a path of roaming about the Amish countryside. He was all about freedom and being able to do as he pleased, while still keeping to Amish beliefs. But when he starts to realize that Julia may mean a little more to him than he originally thought, it's amazing to see the transformation in him. I never really thought of Amish people as the roaming sort, but it suited him well.

I thought Fisher's real strength in this book was her character building. Not only do the main characters stand out but the secondary ones as well. Julia's relationship with her siblings was well written and came across as realistic and easy to believe. I'm the middle child myself and I thought the interactions between the brother and sisters was spot on. M.K the youngest gave the story a lot of humor. Menno the shy and simple minded brother gave it a very heart warming feel and Sadie was just priceless! She was a less than skinny girl with a lot of heart. I loved her and can't wait to read her story in the second book in the series scheduled to release later this year.

I'll just come right out and say it...  If you want to read good Amish fiction than look no further than Suzanne Woods Fisher. Her books have a certain charm that is undeniable. The writing is both heartwarming and full of wisdom. Her portrayal of the Amish people makes them come alive for the reader, who wants to learn about their simple way of living and how they use the truths they impart in their own lives. As a first book in a series, this one didn't need any grace, it stood up well to all the emphasis put on introducing the characters and setting up for future books. The story was solid and interesting. And the love story aspect was just as beautifully written as any romance.

Available January 2012 at your favorite bookseller from Revell, a division of Baker Publishing Group.

Suzanne Woods Fisher is the bestselling author of The Choice, The Waiting, The Search, and A Lancaster County Christmas, as well as nonfiction books about the Amish, including Amish Peace. Her interests in the Anabaptist cultures can be directly traced to her grandfather, W.D. Benedict, who was raised in the Old Order German Baptist Brethren Church in Franklin County, Pennsylvania. Benedict eventually became publisher of Christianity Today magazine. Suzanne is the host of Amish Wisdom, a weekly radio program, and a columnist for Christian Post. She lives in California.
Posted by justpeachy36 at 10:00 AM

Hi Debbie! Wow...what an awesome review! I loved your insights about "The Keeper" and truly appreciated your encouraging remarks about my writing. I don't feel like I have much talent but I do work hard--thank you for noticing! Hope you'll be on Sadie's book tour (The Haven--coming out this summer). Blessings to you, dear Debbie! Warmly, Suzanne