Review and Giveaway: Wine to Water

Wine to Water: A Bartender's Quest to Bring Water to the World by Doc Hendley (Founder of Wine to Water)


(Received for an honest review from TLC Tours)

Doc Hendley never set out to be a hero. In 2004, Hendley, a small town bartender, held wine tasting events to raise awareness and funds for clean-water projects around the world. He had planned to donate the proceeds through traditional channels, but instead found himself traveling to one of the world's most dangerous areas: Darfur, Sudan.

There, Doc witnessed a government-sponsored genocide where the number-one weapon was water, not bullets. The Janjaweed terrorists had figured out that eliminating or contaminating water sources is remarkably efficient for mass extermination. With limited funds, Doc realized that he couldn't build new wells costing $10,000 a pop, but he could hire local workers to restore a damaged well for a mere $50 each. He'd found his mission. Today, Doc and Wine to Water continue to help repair and maintain water-containment systems in places like Darfur, Cambodia, Uganda, and Haiti.

Doc is a regular, rough-and-tumble guy who loves music, booze, and his Harley - but he also wants to help. Wine to Water is a gripping story about braving tribal warfare and natural disasters, encountering fascinating characters, and doing good. It is also an authoritative account of a global crisis and an inspirational tale that proves how ordinary people can improve the world.

When I was first looking at this book for review, I thought it was an interesting story of how an ordinary guy, who was looking for a greater purpose. But as I began to read Doc Hendley's story, I realized that this book is part memoir and part call to action. In the United States we take for granted our ability to go to the faucet and get a drink of clean water, whereas in other countries that is completely unimaginable. I learned a lot of things about the world water crisis from this book, that I had no idea about. But, most of all I think I learned that one person can still change the world.

Wine to Water is the inspirational story of how one man, went on a quest into some of the most war torn and inaccessible areas, where even the UN is afraid to go, to bring clean drinking water to the masses. I can't tell you how inspired I was from reading Doc Hendley's story. He was just a normal guy, like my neighbor down the street. He was like me. He felt somehow that he had a greater purpose in this world than tending bar in a small town. There was something he could do, that he could offer, that might make things better for even one person and that made all the difference.

It is amazing to me when I hear facts about how the world water crisis claims more lives in any given year than war claims with guns. It's one of those things that people just don't even give a second thought. But there are countries out there, where insurgents are not fighting over religion or politics, they are fighting over land and water. This is a situation that is close to my heart. In my freelance career I have had the privilege to work with some great organizations like the World Water Council and water.org, to raise awareness of the kinds of problems that Doc Hendley describes in this book. Every twenty seconds a child dies from a water related illness, so you can see how important it is to make a difference.

This is a book that will not only open the readers eyes to what others are suffering but it shows them that one person can still make a difference in this world. Because of the actions of Doc Hendley and his organization Wine to Water, by the end of 2011 over 100,000 people were given access to clean water. This book reads like a memoir of one person's journey but it also details the problems throughout the world with water and how readers can become involved and help to change the world one well at a time.

I loved the book, thought it was well written and easy to understand. Doc is  a normal guy, perhaps a little rough around the edges, but inspirational to the core. I think readers who are interested in world events, as well as, those who love memoirs and inspirational people will love this one. And maybe it open just one person up to the idea that they can change the world! To me, that's amazing!

Wine to Water will be released to the public on January 5th, 2012. Get your copy from your favorite bookseller! 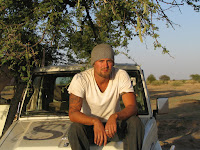 Doc is the Founder and President of Wine to Water, a non-profit aid organization founded in 2007 focused on providing clean water to people in need around the world. Hendley was a top-10 finalist for CNN's 2009 Hero of the Year and was featured on AC 360 with Anderson Cooper during the Haiti earthquake coverage as he was in Port-au-Prince providing and installing clean water filters for Haitian orphanages. He is an avid public speaker with many major speaking engagements lined up for the coming year.

Doc lives in Boone, NC with his wife and two children. Balancing family life and the demands of building Wine to Water, Doc Hendley continues to travel to underdeveloped, war-ridden nations, working in the field bringing clean water to those in need and also traveling and speaking around the country to raise awareness and advocacy for the worlds water crisis.

This giveaway is for one copy of Wine to Water by Doc Hendley.


~ You must be a GFC follower or E-mail subscriber to participate.
~ US and Canadian addresses. No P.O Boxes.
~ The deadline to enter this giveaway is Midnight EST January 16th.


1. Please leave  a comment with your thoughts on the world water crisis.
2. Please fill out the FORM.
Posted by justpeachy36 at 12:30 PM

I read some where the US wastes the most water and we're running out of water faster than other countries, wish I could quote my source but can't remember where I read it.

I saw an article some guy posted recently where he figured out how many gallons of water were on the planet from the beginning, and how many people there are = how much water has been used, which proved to him that there is plenty of water left. I thought the guy came off as an idiot! His logic was totally flawed! And the amount of water isn't an issue. The issue is access to CLEAN, DRINKABLE water! God Bless Doc Hendley for his work!

I am very interested in this book. I just finished reading a book about life in a South India slum. They really need clean water there too. What they have is very polluted and disease producing water, filthy water. They also need very clean drinkable water.

Doc Hendley is an amazing inspiration to so many people. This issue is definitely not how much water is left, but how much clean water there is available. It's a wonderful book.

I'd love to read this. Thanks for the chance!
pbclark(at)netins(dot)net