M.J. Holliday has the unusual ability to talk to the dead. But when it comes to a demon spirit, she may be wasting her breath...


TIME TO TAKE A DEMON DETOUR

M.J. and her crew are forced to interrupt the frantic schedule of their reality-television show. Ghoul Getters, and hotfoot it to New Mexico, where a dreadful demon is waging tribal warfare. Sam Whitefeather - M.J.'s spirit guide and late grandfather to her fellow ghost buster and boyfriend, Heath - urgently needs her help to stop this evil spirit from wiping out the descendants of his tribe.


To defeat the demon, M.J. is told she must kill whoever released it - a thought that horrifies her. But with all these lives at risk - including her boyfriend's and her own - it may be kill or be killed. Still, it doesn't take a psychic to predict M.J.'s going to have a devil of a time making New Mexico a demon-free zone.


Victoria Laurie's paranormal cozy mystery series, the Ghost Hunter Mysteries are always a fan favorite. The latest book in the series, Ghoul Interrupted continues to surprise and entertain Laurie's fans, while drawing in tons of new readers. Laurie's mix of the supernatural and the mysterious is always a fun read that keeps readers on their toes, trying to figure out M.J's next move. Ghoul Interrupted takes her and her merry band of followers on a road trip to New Mexico exposing fans to a new locale and a new supernatural force.


Occasionally I come across a few mystery series' that I have mixed feelings about. In the past the Ghost Hunter mystery series has fallen in that category. But with the latest addition, my feelings are somewhat more settled. I admit that this by no means a flaw in the authors writing or anything like that. I am a huge fan of the paranormal and of cozy mysteries and mixing the two together is usually a winning combination in my book. But with this series some of the books felt a little too cliche or perhaps a better way to put it, is too over-the-top or cartoonish to suit my tastes. That's not to say that it wouldn't appeal to other readers, I'm sure it does. But Ghoul Interrupted is certainly nothing like that and I hope that the author continues in this new more realistic fashion. If so, this series will become one of my favorites. This is a fantastic book, for both paranormal and cozy fans!


I have a bit of a Native American background, as my father's grandmother was a full-blood Cherokee. She married a transplanted Scot. You can imagine the combination. That being said, I loved the Native American mythos that Laurie takes on in this book. I've always been kind of partial to Heath and taking a deeper look into his family and background was extremely interesting. Native American legends and tales are intriguing and make some awesome fodder for story building. I thought Laurie did an amazing job of bringing out these elements in Ghoul Interrupted. The Whitefeather's were amazing!

When I'm reviewing cozy mysteries, I tend to try to figure out if the plot is plausible. Is there some possible way this could have happened in real life. But when you review a paranormal cozy you have to throw that completely out the window. The story itself isn't meant to be plausible. It's meant to put reading in touch with things that are supernatural, things that don't occur in the normal scope of life. The paranormal aspects of this book were very well written from M.J.'s intrepid spirit guide, Sam, who once happened to be Heath's grandfather to the malevolent demon that plagues the Whitefeather's in this book. Laurie did a remarkable job of bringing these characters to life and readers will certainly appreciate the fact that this is kind of book is a total escape.


M.J. is once again a force to be reckoned with. She finds clues first and asks questions later, which sometimes gets her in trouble. I love the fact that Laurie creates a close knit group of secondary characters to be a part of M.J.'s team. Heath of course does double duty as lover and part of the gang and Gilly is so offbeat. He adds tons of humor and idiosyncratic behavior to the book and keeps things off kilter and sort of chaotic. I liked that in this one. It seemed well placed and not to overdone. Laurie kind of settles it down a little in this book and I liked the change of pace and different kind of tone she presents here. Very enjoyable read!

If you love mysteries and you love ghosties... this book just might be what the doctor ordered. It has a lot of humor and a lot of interesting background. The Native American mythos was fantastic and the characters were less overdone and more realistic. This one is perhaps a turning point in the series and readers will appreciate the new direction. Extremely well written and extremely satisfying.


Ghoul Interrupted is available NOW from your favorite bookseller. 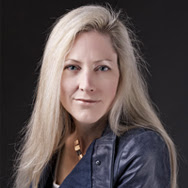 Real-life professional psychic Victoria Laurie drew from her career as a gifted intuitive to create the characters of Abigail Cooper and M.J. Holliday. She lives in beautiful Austin, Texas, with two spoiled dachshunds, Lilly and Toby, and one opinionated parrot named Doc.

The publisher is sponsoring a giveaway for one copy of Ghoul Interrupted by Victoria Laurie.


~ You must be a GFC follower or E-mail Subscriber to participate.
~ US addresses only.
~ The deadline to enter this giveaway is Midnight EST February 9th.


1. Please leave a comment in appreciation to the author on THIS post.
2. Please fill out the FORM.
Posted by justpeachy36 at 12:30 PM

This book looks awesome, but then the whole series looks great. Will have to add books to must buy list. Victoria is a new author for me and would love to win and read this book. I love to read and always looking for new books and authors to check. Love the titles and covers for this series.
Thanks for the chance to win.
christinebails@yahoo.com

another book to add to my WishList!!!

This book sounds very interesting. I like the idea of incorporating Native American myths into the story. Thanks for the giveaway.

I will have to add this series to my TBR list!

Thanks for the giveaway. The book sounds really great. Tore923@aol.com

I love cozies, paranormal or not. My son is part Cherokee too from my first husband and we are always interested in any Indian folklore or legends. Thank you for the extra information.

This looks like another fun cozy must-read for me.
suefarrell.farrell@gmail.com

Ghosts, demons, humor! My kind of book!!I'd love to be entered to win. I will be getting her books in the near future. Thanks for the giveaway.

I love the Native American myth aspect of this book and would LOVE to win a copy!! Thanks so much for the giveaway:)

I love Native American myths and would love to read them with a mystery. What a good idea!

My wishlist grows as I read the blogs I follow! Thanks for hosting.

I love Victoria Laurie's writing style and have read all of her books. I am looking forward to reading this installment and enjoying what MJ gets up to next :) Thank you for sharing with us and for the awesome giveaway opportunity.