Ex-cemetery tour guide and reluctant medium Pepper Martin is dying for a break from communicating with the no-longer-living. But returning a legendary Wild West star's ghost to his hometown is proving one killer of a road trip...


Her job has been cut, she's low on cash, and her detective sometime-boyfriend refuses to even talk about her ability to see the dead and solve their murders. So Pepper is most certainly down for a vacation to get her spirits up.

That is, until her scruffy yet cute scientist friend Dan is kidnapped - and throw responsible demand that Pepper steal the remains of Chester Goodshot Gomez, a sharpshootin' star performer buried at Garden View Cemetery. Goodshot's ghost has plenty of supernatural reasons to accompany Pepper to New Mexico... and raise rowdy hell once there. But when his bones disappear and bodies start dropping. Pepper has one clever murderer to track - one whose idea of boot hill has nothing to do with Jimmy Choo...


Wild Wild Death is the eighth book in the Pepper Martin mystery series written by veteran cozy author, Casey Daniels. As always Daniels delivers a well written, tightly plotted novel that will have fans raving. Pepper once again finds herself in a bit of a mess with her on again off again boyfriend missing and a ransom note that requires the bones of a dead man as barter for Dan's life. This long running series is a favorite among cozy fans, so if you are just starting out with Pepper be advised, you'll be out buying the other seven before you get this one finished.

Pepper Martin is anything but a typical heroine and cozy fans, as well as, paranormal enthusiasts will love this one. Pepper, being the only investigator that caters to the dead is such an amazing character, that has evolved so much throughout this series. I think one of the things that readers find so endearing about Pepper is the fact that she is so normal. Here she is, able to talk and interact with the dead, but she still has trouble meeting her financial commitments and well as her romantic ones. She seems like the girl next door, with a bent toward the supernatural. She draws a reader in quickly and doesn't let go.

In Wild Wild Death Pepper is dealing with something that generally happens to all of us at one time or another, she's out of job and in need of a distraction. But sometimes you have to be careful what you wish for, because when the dead come walking, Pepper has to help out. The ghosts that Pepper encounters in each of her adventures are usually among my favorite characters in each book, and Chester Goodshot Gomez is no different. He was a hoot! I liked him so much and I think fans of the series will find his story very interesting going back to the days of the famous Wild Wild West shows. A glimpse of genus, if you ask me. It made for a great backdrop to this mystery.

The mystery aspect of things was right on target which is usually the case with Daniels writing. I haven't read too many books by her that I didn't like and this certainly wasn't one of them. It's fast paced and has just the right amount of supernatural to go along with the mystery. It has that "Ghost Whisperer" kind of feel at times, but that's certainly not a bad thing, it's a great hook for this series. I didn't figure this one out to nigh on the end, which is always a plus... If I can't figure it out, it's very well plotted LOL! When you read 10 or so cozies a month you start to get a knack for figuring them out, so I consider it a hallmark of a good mystery writer, when the culprit stays hidden until the author is ready to reveal.

A great addition to a very colorful and entertaining series. I think there are still a lot of directions Daniels can take this series and I hope she continues to crank them out for us die hard Pepper fans! This is a series that I highly recommend. You can start at the beginning with Don of the Dead and follow Pepper's character development all the way through or hop right in anywhere along the way, without too much trouble. Daniels always does a fantastic job giving just the right amount of back story. Take it from me, you won't be disappointed with any of the books in this fantastic cozy series.

Wild Wild Death is available NOW from your favorite bookseller. 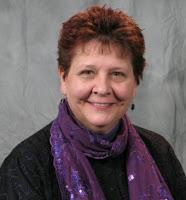 Casey Daniels once applied for a job as a tour guide in a cemetery. She didn't get the job but she did get the idea for the Pepper Martin Mysteries. Casey learned to love mysteries early, thanks to her father, a Cleveland police detective who enjoyed Sherlock Holmes stories and spent his days off searching for stolen cars, with Casey along for the ride. Later, she read her way through every mystery on the library shelves. Casey has a degree in English and a background in journalism and teaching. She lives in Northwest Ohio.

The publisher is sponsoring a giveaway for one copy of Wild Wild Death by Casey Daniels.

~ You must be a GFC follower or E-mail subscriber to participate.
~ US addresses only (publishers request).
~ The deadline to enter this giveaway is Midnight EST February 2nd.


1. Please leave a comment in appreciation to the author on THIS post.
2. Please fill out the FORM.
Posted by justpeachy36 at 9:30 AM

That was a great post. I have really enjoyed this series and I cannot wait to read what happens next. Thank you.

I have heard so many good reviews on this series! I have it on my TBR list.

Thanks for the great giveaway. I would love to read this series. It sounds awesome. Tore923@aol.com

This looks really fun. Pepper is new to me and the idea of an Old West ghost looks intriguing!
JHolden955(at)gmail(dot)com

Looks like you really enjoyed the story. I have to admit that I've not heard of this author or series before and I'm excited to add it to my wishlist! Thanks for the giveaway!

thank you for this giveaway!!! was hoping for it!!!

Thank you so much for sharing with us today and for the awesome giveaway opportunity. I have read book one and really need to catch up:)

Great giveaway. I so love this series!!

I've recently gotten hooked on this series so I would love to read this newest novel. Thanks for the chance and congrats on it's release.
Tweet: https://twitter.com/#!/LadyVampire2u/status/161387370560761856

This sounds like a good series and would love to win this book!
mamabunny13 at gmail dot com

A cozy with a lot of cemetery settings should be fun. Thanks for the giveaway.
suefarrell.farrell@gmail.com