Video: This trailer was found at Tricia Goyer's website.


August 1944. Paris is on the cusp of liberation. as the soldiers of the Third Reich flee the Allied advance, they ravage the country and steal countless pieces of irreplaceable art. In fact, Reichsmarschall Hermann Goring will stop at nothing to claim the most valuable one of all - the Mona Lisa - as a postwar bargaining chip.

But the woman with the mysterious smile has some very determined protectors. Can Swiss OSS agents Gabi Mueller and Eric Hofstadler rescue Leonardo da Vinci's masterpiece before it falls into German hands?


With nonstop action and intrigue, Chasing Mona Lisa is sure to get your adrenaline pumping as you join the chase to save the most famous painting in the world. From war-ravaged Paris to a posh Swiss chateau, the race is on - and the runners are playing for keeps.


Chasing Mona Lisa written by Tricia Goyer and Mike Yorkey is the second book these writers have collaborated on. Their first book The Swiss Courier is also about Gabi Mueller. This writing duo gives readers a historically based novel with Christian overtones. It is steeped in period detail and will have history fans caught in it's grip as well as romance enthusiasts.


There were several things that I liked about this book. The historical aspects of the book were so well researched, that it was easy to see that the authors took great pains to make it historically accurate and believable. Being a history major I was somewhat familiar with the practices of Hitler's Third Reich in regard to relics, historical artifacts and famous artwork. Which made me like this book even more. But, I think readers who are unfamiliar with the history behind it, will like it because it educates as well as entertains.

This book will also appeal to art lovers. Using the Mona Lisa as a backdrop to the action of this book was a genius idea. There are very few paintings that can boast the kind of noteriety that the smiling lady has. Just about everyone has heard of it or knows what it looks like, and I thought that was fantastic way to draw interest to the novel and the story behind what was happened to the masters during this post war period.


I also liked the romantic aspects of this novel. Gabi isn't one to dally around or moon over someone but it was nice to see her take notice in this book and find someone who complimented her strengths. I think she is a very no-nonsense kind of character and it was nice to see her out of her element a little bit when love was concerned. The authors did a great job of making this part of the book hold up to the historical significance of the rest of the story. The historical pars of the book didn't war with the romantic parts. They played off each other and worked well.

So many things about this book seemed to really gel and work well together. It was just a very harmonious pairing. History and romance, where could you go wrong? It was not overbearing either. It wasn't preachy or condescending. I was pleasantly surprised at how the authors chose to let the Christian overtones of the book speak for itself and not stomp all over other peoples beliefs... very well done!

I look forward to more books from this pair and I think it's safe to say this book will probably be well received by Christian Fiction fans as well as art lovers and romance enthusiasts. There's a lot going on here. It's not one of those books that you can just read and not really think about. It requires a little something from the reader and to me that makes a more meaningful experience.


Chasing Mona Lisa is available NOW from your favorite bookseller.

Tricia Goyer is the author of twenty-eight books, including CBA Bestseller Beside Still Waters and Remembering You. She lives in Little Rock, Arkansas, with her husband, John, and they are the parents of four children. She loves talking with World War II veterans, doing drama in children's church, and mentoring teenage mothers. 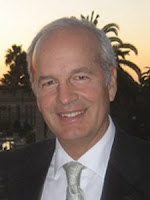 Mike Yorkey is a veteran author or coauthor of more than seventy-five books, including the Every Man's Battle series and The Swiss Courier, the prequel to Chasing Mona Lisa. He lives in Encinitas, California, with his wife, Nicole, and they spend part of the year in her native Switzerland. They are the parents of two adult children.
Posted by justpeachy36 at 9:30 AM