Review: From the Memoirs of a Non-Enemy Combatant

From the Memoirs of a Non-Enemy Combatant by Alex Gilvarry


(Received for an honest review from Viking)


Video: (WARNING: There is a wordy'durd (the f-one even) in the trailer! But only one!) Oh My!

FASHION AND G-MEN CLASH IN A MASTERMINDFUL DEBUT

Boyet Hernandez is a small man with a big American dream when he arrives in New York in 2002, fresh out of fashion school in the Philippines. But on the brink of fame and fortune, there comes instead a knock on the door in the middle of the night: the flamboyant ex-Catholic is swept to America's most notorious prison, administered a Qur'an, and locked away indefinitely to discover his link to a terrorist plot.

Now, in his six-by-eight-foot cell, Boy prepares for the tirbunal of his life with this ultimate confession. From borrowed mattress to converted toothpick factory loft, from custom suit commissions to high-end retail, we are immersed in a wonderland of soirees, runways, and hipster romance in twenty-first-century Gotham. Boy is equally at home (if sometimes comically misinformed) invoking Dostoyevsky and Diane von Furstenberg, the Marcos tyranny and Marc Jacobs, the vicissitudes of  memory and the indignity of the walking sandwich board. But behind the scrim of his wit and chutzpah is his present nightmare of detainment in the sun-baked place he calls No Man's Land. The more Boy's faith in American justice is usurped by the Kafkaesque demands of his interrogator, the more ardently he clings to the chemical hope and humanity of his adoptive country.

Funny, wise, and beguiling. From the Memoirs of a Non-Enemy Combatant gives us a tale so eerily evocative that it, and his hero, are poised to become an indelible part of the reader's imagination and the literature of our strange times.

Alex Gilvarry's debut novel, From the Memoirs of a Non-Enemy Combatant uses humor and wit to take a deeper look into a not so funny subject. The post 9-1-1 world the hero finds himself in, is one of opportunity, but the veiled paranoia of the government is ever-present. When Boy takes on some less than reputable backing to get his fashion line on the runways of New York, he never considers the possibility of being accused of terrorism. Readers will laugh and cry along with Boy as he relates his story, as a detainee who's rights are no longer existent.


Gilvarry uses humor to diffuse this very political subject. Boy is allowed pen and paper and decides to chronicle his rise to fashion fame from the time he landed in New York until he was taken prisoner and left to languish away without proof of guilt. Gilvarry is able to interest the reader in a heavy topic by allowing Boy's adventures to take on a slightly madcap influence, while telling the underlying tale of the horrendous treatment and violations of human rights that some non-combatants were treated to. I thought the author did an amazing job of using fiction to clearly articulate his views on the tactics and practices used at Guantanamo Bay.


This is probably not a book, I would normally have picked up for a few reasons. I thought this kind of subject matter would lend itself to being very heavy. I will admit to reading books that are a little more romantic and a little less political because I like to read to relax and to take the edge off a bit, not add to it. So I was fully expecting a book that interested me, but didn't really have that escape factor. I was pleasantly surprised that Gilvarry was able to make this book so much lighter than I expected. Boy's voice seems to slip back and forth that of naive young man to a person with more wisdom than they know, and that made all the difference.


As most everyone who reads this book will know, Guantanamo Bay has been harshly criticized for it's treatment of detainee's. The interrogation methods, the living conditions, the lack of human rights etc. etc. I liked the fact that Gilvarry did not try to mask the horror of what these people went through. Though humor is a big part of this book, he still doesn't sugar coat the plight of these people, who were basically hidden away and forgotten about. I liked the stark differences between Boy's life before and after his detainment. He was living a life of luxury and in the blink of an eye he has nothing but his story.


I'll be honest in saying there were parts of the book that didn't ring completely true, mostly those were scenes from Boy's life as an up and coming fashion designer. There were times it seemed a little trite when compared with what he was going through in "No Man's Land." But in some ways I think that was probably what the author may have been going for. Showing that the "American Dream" was possible but not always attainable. And Boy's relationships with what he called "waspy" women were not at all what I expected.


Overall I enjoyed the book and thought the author was very clever at using fiction for a higher purpose. Gilvarry proves that books can still influence people and that is a worthy goal. His use of wit and humor was remarkable and I think readers who like this kind of book will be very enthralled by the story and the characters. Boy was a hoot! But he was also very savvy! A very interesting hero to say the least. I recommend this one to readers who have an eye for fashion and a willing mind. It may be a bit of a heavy subject, but it is lightened greatly by Boy's madcap adventures on the mean streets of New York. A great debut!

From the Memoirs of a Non-Enemy Combatant is available NOW from your favorite bookseller. 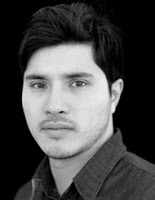 Alex Gilvarry is a native of Staten Island, New York. He's the founding editor of the Web site Tottenville Review; he has been named a Norman Mailer Fellow; and his writing appeared in The Paris Review. He lives in Brooklyn, New York, and Cambridge, Massachusetts.
Posted by justpeachy36 at 9:00 AM