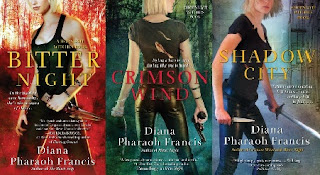 
FOR MOST WARRIORS, LOYALTY IS A VIRTUE, FOR MAX, IT'S A CURSE.


From the moment she was bound by magic and transformed into a deadly warrior, Max dreamed of escape. Instead, she went to war. She saved the coven she was enslaved to defend from unearthly destruction, but only at the cost of her own freedom.


Now Max has been taken captive and forced to become the champion of a demigod in a deadly game where the losers die - or worse. Alone and unarmed in a strange, magical city, Max must battle bizarre creatures with unpredictable powers. If she wins, she just might get a chance to go home to her friends, her family, and to Alexander, the Shadowblade warrior whose fate is entwined with hers.


But Horngate's own future is far from certain. The covenstead is threatened by a Fury - a creature that, once is escapes its fragile bonds, will wreak untold destruction. Will Alexander and the other Shadowblades be able to protect Horngate without Max? Or will Max discover that she doesn't have a home to return to?


The highly anticipated third book in the Horngate Witches series, Shadow City, by author Diana Pharaoh Francis is what I would call Urban Fantasy at it's best. This is series and book that I would recommend to seasoned Urban Fantasy readers, as well as, newbies. What a way to break into a new genre! Francis banks on the idea that absence makes the heart grow fonder in the latest installment in the series, as Max the heroine of the first two books is far from Horngate and is thrust into new challenges and battles. Readers will love Alexander's more "alpha" role and the two parallel stories that make for a very intense read!

As many of you know, I keep a very delicate schedule. I balance my freelance career, my family, and my book blog on the edge of knife most of the time. So it's rare that a book, no matter how enticing can put a stop to the constant chaos around here, but Shadow City was one of those books! It was literally one I just couldn't put down until it was finished! After finishing Crimson Wind, the second book in the series, I wasn't really sure where Francis was taking us. There were a lot of unresolved issues and story lines and I couldn't quite figure out how she was going to pull off Max being away from Horngate for most, if not all of book three. Wow! Is just about all I can say... (well maybe not)!

Max is a character I have liked from the beginning. She's a slave that has had to do a lot of things in order to save her coven. She's stubborn, strong-willed and somewhat flawed. I love it when an author understands that readers aren't looking for perfect heroes and heroines. It's so much more about the character growth and transformation that happens to the hero/heroine when they have something to atone for, or some issue that makes them more human. Max is definitely a character like that and in Shadow City, I felt like she grows more than in the previous two books. She is relying more on her own instincts, her ideas of right and wrong, and is fighting a whole new set of battles. I thought that made all the difference in this book. It is easily the best of the series so far.

Alexander is also coming into his own. His feelings for Max are becoming more clear, as he faces a very dire threat to the covenstead, without her by his side. Alexander doesn't want to become prime, he is afraid that will mean that Max will never return. His story runs parallel to hers all the way through this one until the come back together. There's no more dancing around the sexual tension between either and it's about darn time LOL! I loved seeing Alexander as the leader, the alpha male so to speak. Trusting his own gut and his own abilities. I saw so much more out of both him and Max in this book. It bodes very, very well for futures installments.

Not only are the heroine and the hero well fleshed out in this series, but the secondary characters are just as important to the story. I certainly would never have believed after reading book one that I would ever have a good thing to say about Giselle. Francis writes her sooo well. She's a villain you can't help but have a little sympathy for. In the second book, I liked her a wee bit better, in book three... she's really starting to grow on me. The friendship that is starting to develop between her and Max has a lot of potential, can't wait to see where the author takes it. Scooter the demi-god has always intrigued me, but in Shadow City we get to see another side to him. He needs Max. It's a matter of life and death and I loved finding more about him and his motivations. We didn't see some characters we met in the first two books, but new ones emerged. I hope that we see a blending of the new and old in the next book. I just can't hardly wait til it comes out!

Definitely a favorite of my year so far as Urban Fantasy goes. And one I would recommend whole heartedly to all my readers. If you haven't tried this series, what are you waiting for... you'll love it!

Shadow City is available NOW from your favorite bookseller. 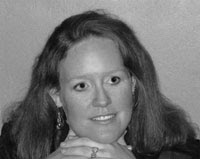 Diana Pharaoh Francis is the author of ten fantasy novels - including the Horngate Witches novels from Pocket Books - as well as many short stories. a teacher in the English Department at the University of Montana Western, she is a lover of chocolate, Victoriana, and sparkly things.
Posted by justpeachy36 at 10:00 AM

I enjoyed the review. I do read some urban fantasy. I haven't read this author, looks like I need to. :-)

I ordered Discovery of Witches.