CoverArt: Click the picture for a larger, clearer picture of the covers in this series. 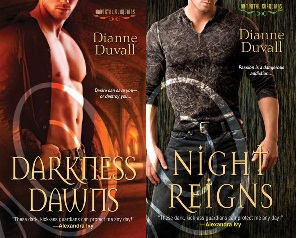 
Ami isn't much on trusting strangers. She has a hard time trusting anyone. But she's no coward, and she's no pushover in the protection department either. So when she comes across a mysterious warrior taking on eight deranged vampires on his own, she doesn't hesitate to save his bacon. Of course, that was before she realized what one little rescue would get her into...


Marcus Grayden has been an immortal protector of humanity for eight hundred years, and at the moment he's not interested in backup. From the moment Ami arrives in his life, he can't deny that she's strong, smart, and extremely skilled at watching his back. But she's also destroying his protective solitude and stirring desires he can't bear to awaken. After all, whatever her secrets - how can she defeat death itself?


Night Reigns is the second book in Dianne Duvall's Immortal Guardians series. Duvall has created a paranormal world where guardians protect humanity from the forces of evil. But these guardians are not perfect, they can be dark and brooding, with troubles of their own. Duvall's world-building skills are exceptional and the her character development is flawless. Her first book Darkness Dawns was a well crafted and thought out book, but I think Night Reigns exceeds even my highest expectations for the series.

I am so glad that I got in on this series at the beginning. Duvall surprised me in the first book, with her world-building. When you read a lot of paranormal romance and fiction, I think you get a little jaded by the enormity of what the author is trying to do, create a whole new world in which their characters live and breath. As readers we learn to kind of expect the unexpected and then a book like Night Reigns comes a long and knocks us on our collective asses. Not only does the author give us some spell binding characters but the world in which they interact becomes extremely vivid and real. That takes some skill and Duvall has it!

The main couple in Night Reigns, Marcus and Ami, made secondary appearances in the first book in the series and now they have a more active, in your face role in this book. Marcus is my favorite kind of hero, dark and brooding, with a bit of a chip on his shoulder. He's only ever loved one woman and she could never truly be his. Now that Bethany is really gone, Marcus is kind of lost. He doesn't have a death wish mentality, but he definitely puts himself in some situations where he could ultimately lose the battle. When Seth appoints Ami has his second, Marcus is less than enthused though he is unmistakably attracted to her. I liked the fact that Duvall chose to make her someone he couldn't ignore. Her abilities and her determination spoke to him on an inner level that he didn't particularly like, but he understood it. I thought he was just amazing! He goes through so much in this book and comes out a deeper more thoughtful man.

Ami is a kick-ass heroine. She's been through hell and she's come out on the other side. Readers who read the first book will know that there is a lot more to this chick than meets the eye. Though Marcus believes her to be human, she has a secret that she doesn't think she can trust him with. But as their relationship starts to strengthen and change, Ami struggles with letting him in to that inner sanctuary of her heart. It was so gratifying when it finally revealed what Ami is and how it will affect she and Marcus. I thought the author did an amazing job of writing the journey that their love takes. It was inspiring to say the least.


This is a series that really hits the spot with me. One of my all time favorite paranormal series is J.R. Ward's, Black Dagger Brotherhood, and I have to admit the Immortal Guardians are right up there with the Brotherhood in terms of uniqueness, in well written and amazing storytelling, and in just about all other categories. If the author continues to improve as much as she did with this book in each book in the series, this will be a very long lived and much loved series. I can't wait to see what happens next. The author has this knack for revealing only small tidbits of the overall story as she goes along. A lot of questions were answered but there are still more avenues to explore. I want to know what Seth is... LOL!

If you haven't tried this author let me assure you, you won't be disappointed when you do. Night Reigns is not to be missed, by any paranormal romance fan. The year is still young, but this one is already fast becoming a favorite of mine.


Night Reigns is available NOW from your favorite bookseller. 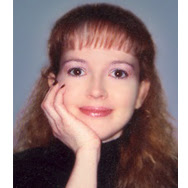 Diane Duvall earned a BA in English from the University of St. Thomas (Houston) and currently lives in Texas with her husband.
Posted by justpeachy36 at 9:30 AM