Review: To Walk the Night

To Walk the Night by E.S. Moore


Excerpt from To Walk the Night


Even a vampire has to face her inner demons...


Kat Redding is the very thing she hunts: a vampire, thirsting for blood, capable of killing any creature unlucky enough to get in her path. The difference is, Kat kills her own kind in order to protect human Purebloods. She's good at what she does. Good enough to earn the nickname Lady Death - and the enmity of every bloodthirsty being around. But now a vampire Count in intent on merging his House with a werewolf cult to create a force of terrifying power.


Kat can't allow that to happen. Even if it means taking on a den of weres and a vampire more ruthless than any she's encountered before. She has the weapons, the skill, and a few allies. But that may not be enough to eliminate the Count before her own dark nature rises to the surface - and costs her whatever is left of her humanity...


To Walk the Night is the first installment in E.S. Moore's new Urban Fantasy series. It is gritty, dark and gives new meaning to things that go bump in the night. Moore brings out some interesting new ideas on the vampire and werewolf mythos. He goes back to the origins and legends when vampires were bloodsuckers and werewolves wanted nothing more than to tear your heart out. No wimpy villains here, these are serious bad guys and Moore writes them with ease.

Moore certainly isn't going where no man has gone before with the theme of To Walk the Night, but the journey he takes the reader on is one of a kind. I don't read too many male urban fantasy writers, Jim Butcher being my favorite, but I took a chance on this one and was pleasantly surprised. It is true urban fantasy, with that dark, edgy, feel that is unmistakable in the genre. There is no lead male lurking around the corner leaning the book  toward a paranormal romance feel. This is straight urban fantasy and that was really refreshing.

It is the first book in a series, with that said, I do have to give it a bit of grace. There were some moments when the pace was a little slower than I would have liked, but once the logistics of the world building and character set up were out of the way the action ramped up and didn't let go. There was also an overabundance of characters with issues. I had a little bit of a hard time trying to figure out who was who and why they were important, but once I had it down, it easy. The second book in the series should flow a lot better and give the reader that sense of continuity that this one lacks a little of. That's not say it wasn't a great book, because it was. It has the potential to be a very good series and I think not that Moore has his feet wet, he'll take this and run with it.

There were a couple of things about the overall plot that I found very interesting. I liked the whole idea of the Vampire Houses and how they used the werewolves as their guard dogs, so to speak. This isn't the first time I've seen this idea used. R.A. Salvatore's fantasy series, The Dark Elf trilogy also uses the "houses" idea and it worked extremely well with the dark drow and with E.S. Moore's vampires. There are also hints of the "Blade" movie series, in regard to the main character Kat Redding. She is a vampire hunter, who happens to be a vampire herself. She loathes that part of herself and fights an epic inner battle with her conflicting natures.

Kat is such a great character. I'm looking forward to subsequent books in the series just learn more about her. She's a very no-nonsense, kick ass kind of chick. She means business when she takes on the Count, who intends to wreak a lot of havoc on the Purebloods (humans). I liked her take no prisoners attitude and the fact that Moore didn't have her completely deny who she was. She knows she's a vampire, she doesn't like it, but she deals. I liked that. In my experience not to many male urban fantasy writers can really nail a female lead, but Moore does it with style.

Overall I really enjoyed this one and I would definitely recommend it to urban fantasy readers. It's not a paranormal romance disguised as urban fantasy either, which is a plus in my opinion. I like it when an author clearly draws the genre line. There are some ups and downs as happens with most first in a series books, but nothing that can't be overlooked, up against all the positive things about this book. Great potential for a great new series!

To Walk the Night is available NOW from your favorite bookseller. 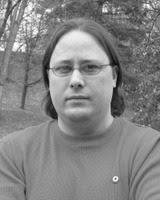 E.S. Moore was born and raised in Ohio where he still lives with his wife and son.
Posted by justpeachy36 at 10:30 AM