Review: Crash Into You


CoverArt: Click on the picture for a larger, clearer picture of the covers in this series. 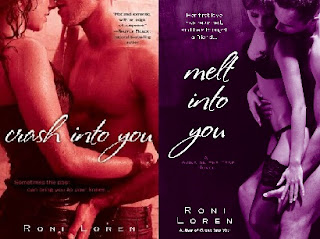 Excerpt from Crash Into You (WARNING: this excerpt is not appropriate for readers under 18 years of age.)


Her heart won't forgive, but her body can't forget...


Brynn knows what attorney Reid Jamison is like once stripped out of his conservative suit and tie. Years ago she left herself vulnerable, only to have him crush her heart. Now she needs him again. Back on top. And he's all too willing to engage. But as their primal desires and old wounds are exposed, the sexual games escalate - and so does the danger. Their hearts aren't the only things at risk. Someone else is watching, playing by his own rules. And his game could be murder.

Not only is this book a first in a series, but it's also a debut novel, which generally means the writer is still learning the ropes and I tend to be a little more lenient in my review, but that was completely unnecessary with this book. Roni Loren has crafted a novel that is satisfying on so many levels. Everything from the character development to the setting was spot on with this one. Loren obviously knows her d/s (dominant/submissive) p's and q's. And her impression of what a BDSM retreat should be all about was totally believable. Readers who are looking for a book that is both emotionally riveting as well as scorching hot, need look no further.


Loren's characters were complex and very engaging. Brynn is a very no-nonsense, world weary young woman. She grew up way too fast and had more on her plate than anyone should. She was the one in control, always helping those around her, her mom, her sister, and never taking time for herself and her own needs. She was a character that will resonate with readers who have seen more than their fair share of heartache. Loren drew me in with Brynn in a deep way. She was the just the right kind of person to take pleasure and gratification from the submissive role she is placed in. I thought Loren did a fantastic job with her character. Showing her vulnerability in a way that was unexpected and came across as very genuine.

I have to admit that I really loved Reid. Here you had a guy who had everything. Money, good looks, a career that offered him a chance to show his intelligence and keen sense of purpose. But, just below the surface of control that he shows to the outside world, he is simmering, holding onto his control so hard that his body literally shakes with his own desires. I loved the barely contained power that emanated from this character. When he lets go and lets his darker, edgier desires come to light he is beyond sexy.

A book like this can challenge the readers idea of what the dominant/submissive relationship is all about. I think some people think it's all about someone wanting to possess or own another person, and there is an element of that in this kind of relationship but it is certainly not the main focus. I think Loren did a fantastic job of showing the complete trust that develops between people who show each other a side of themselves that is so deeply personal. It was a beautiful thing to read!


Crash Into You is available NOW from your favorite bookseller. 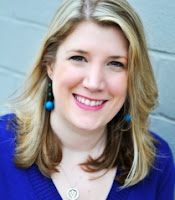 Roni wrote her first romance novel at age fifteen when she discovered writing about boys was way easier than actually talking to them. Since then, her flirting skills haven’t improved, but she likes to think her storytelling ability has. After earning a master’s degree in social work from LSU, she worked in a mental hospital, counseled birthmothers as an adoption coordinator, and did management recruiting in her PJs. But she always returned to writing.


Though she’ll forever be a New Orleans girl at heart, she now lives in Dallas with her husband and son. If she’s not working on her latest sexy story, you can find her reading, watching reality television, or indulging in her unhealthy addiction to rockstars concerts. Her debut novel, CRASH INTO YOU, will be published by Berkley Heat January 3, 2012!
Posted by justpeachy36 at 11:30 AM

I would have a place in the mountains, maybe Colorado or Wyoming. I dont' know what kind of place it would be. Maybe something that caters to those who want to escape and just be quiet for a while.