Q & A and a Giveaway: Erin Kelly

The publisher has provided this great question and answer session with Erin Kelly, author of The Dark Rose. They are also sponsoring a giveaway for a copy of Erin's book, see details at the end of the post.

Q.  Is any part of THE DARK ROSE autobiographical, or is it wholly imagined?
A.  Of course parts of me leak into my characters. I can only tell you about the aspects I am conscious of. I’m sure there are more. As one British reviewer recently told me, ‘Your readers know you better than you know yourself.’ The Dark Rose is told from the alternating points of view of 19-year-old Paul and Louisa, the older woman who eventually becomes his lover. Both of them embody different aspects of me at various times in my life.  Like Louisa, in my late teens I was a sucker for anything that was prefaced by the word ‘alternative’, whether music, therapy or religion, and it was great fun revisiting those years. I also had a terrible weakness for pretty boys who wanted to be rock stars, although in my case that did not prove fatal. And like Paul, I grew up in Essex, the infamous county to the east of London that follows the Thames out to the North Sea. My home was bookish and sensitive, but the wider culture there is neither of those things, and when I was writing him I drew on memories of isolation that I sometimes felt growing up. Q.  Most of us have flirted with dangerous situations or people during adolescent and young adult years, but few pay the price that your protagonists, Paul and Louisa do? What inspired you to write about adolescence? A.  Late adolescence is when life really begins; those years are a perfect storm of freedom and curiosity, responsibility and impulsiveness. Life has not yet blunted the edges of our passion so little wonder we cut ourselves from time to time. On a more practical level, during this period, life is relatively transient and that suited my plot. Without mortgages, careers or families to tie them down, my characters could easily uproot themselves, run away, begin new lives, and hide.  Q.  Why did you choose the backdrop of a sixteenth-century English garden as the backdrop for this novel? Can you explain the title in the context of having chosen this as your setting? A.  I’ve always found inspiration in ancient places, and a few years ago I was walking in the gardens at Cawdor Castle in Scotland, when I found half-hidden in the grounds, a battered old VW Camper Van. The juxtaposition between this modern vehicle and the centuries-old garden got me thinking. What sort of person would stay in a place like that? Are they part of the life of the castle or separate from it? What’s their story? From there the character of Louisa slowly grew. She is so scarred by her past that she has rejected all the comforts and threats of contemporary life, content to immerse herself in history rather than deal with the present. This suited her character but also worked on a practical, plot-serving level. It’s not easy these days to live off-grid or under the radar, to remain untraceable, but when we meet Louisa at the beginning of the story, that is just what she has done. Kelstice Lodge, the ruined Elizabethan hall whose garden Louisa is restoring, is my own invention, but is loosely based on a similar project at Kenilworth Castle in Warwickshire. It’s a huge, eerie place. Its crumbling red stone walls have witnessed blood-curdling scenes more powerful and violent than anything I could invent. While I was thinking about Louisa’s character, I happened to see a documentary on the English Heritage project to restore the gardens to the way they looked in 1575, when Elizabeth I came to stay.
The Kelstice Lodge project is on a much smaller scale, and infinitely less professional, but the seeds of inspiration were sown.  (Incidentally, I got the name Kelstice from the pictures tacked to the wall in my study; a postcard showing a page from The Book of Kells was next to a flyer for a summer solstice party.)
As for the title, it’s open to a number of interpretations. There is a scene in the book where Louisa describes to Paul the curse of gardeners everywhere of Rose Sickness, a phenomenon whereby a newly-planted rose will fail to flourish in soil where another rose has been. (I believe it’s something to do with nitrates in the soil, but that’s as far as my understanding goes.) In Paul, Louisa thinks she has found the replacement for someone she loved and lost in violent circumstances when she was a girl. It is only when she accepts Paul on his own terms, rather as a simulacrum of someone else, that their relationship begins to deepen and flourish. Q.  What kind of research did you do for this book? 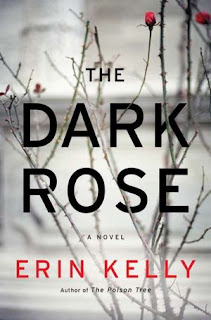 A. The Essex and London scenes I drew from memory, but to create Kelstice Lodge I visited Kenilworth Castle and other stately gardens. I also read an inspirational book called The Lost Gardens of Heligan by Tim Smit, which described a garden restoration project in Cornwall. I urge everyone to read it: beautifully written, it’s full of fascinating detail and has a wonderful true-life cast of quintessentially British eccentrics. Its romantic, shambolic spirit encapsulates life at Kelstice. Funnily enough, the more technical knowledge about garden restoration I amassed, the less made it through into the text. What I didn’t do was actually pay any attention to my own little garden in London; I wrote much of The Dark Rose in the summer months, while the grass and weeds grew waist-high.Q.  In THE DARK ROSE you explore the extremes of obsessive love and loyalty, devotion and desperation, what about these themes inspired you to write about them?A.  What I have noticed on re-reading the novel is that obsessive love is just the springboard for the real issue; that is, how far we can all be pushed, the extraordinary potential within ordinary people – for good, as well as evil. As in my first novel, The Poison Tree, I’m interested in blurring the boundaries between good and bad, guilty and innocent, and obsessive, desperate love is one way to make people cross borders that previously seemed impassable. Throughout the novel, I also explore the idea of whether guilt can ever be shared, or if one party is always to blame, if it is always a case of strength versus weakness. Q.  Why did you decide to make the older character a woman? Do you think the story would be received differently had the ages of Paul and Louisa been reversed? Was it easier to write the character of Louisa for you?A.  I did not consciously decide to write a love story between an older woman and a younger man; that’s just what character, and then plot, dictated. Of course, the dynamic would be different if the genders or ages were reversed but then it would not have been such an interesting story to write. Louisa is actually a classic case of arrested development, emotionally stunted and frozen at the age of 19, when her lover died. And Paul is in some ways sensitive and mature for his age, so in that sense it becomes a more equal relationship than the age gap would suggest. Actually, I think that their different upbringings – she comes from money and privilege, his background is far humbler – would be more of a stumbling block than the years between them.
As for writing Paul, there are some details of male adolescence I can only draw from imagination, but I can remember with cringing clarity how it feels to be a sensitive teenager overawed by the opposite sex.

The Publisher is sponsoring a giveaway for one copy of The Dark Rose by Erin Kelly.


~ You must be a GFC follower or E-mail subscriber to participate.
~ US addresses only.
~ The deadline to enter this giveaway is Midnight EST February 16th.

I enjoyed the interview and learning more about the inspiration and research for this book. I'm looking forward to reading it. Thanks for the giveaway.

Nice interview! Thanks for the giveaway too!

Great interview. I always appreciate the research an author does for their book.

I am dying to read this book!! Thanks so much for the amazing interview and giveaway :)