Eternal Captive (Mark of the Vampire - Book 3) by Laura Wright 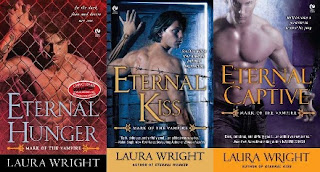 
Lucian Roman knows he must stay away from Bronwyn Kettler for sanity's sake. Since feeding her his blood, he can think of nothing else but possessing her - fighting an uncontrollable desire to kill her, if he has to, and the vampire she has sworn to wed.


Bronwyn, a brilliant vampire genealogist, can never escape her connection to Lucian. He sustained her when she was starving. He still rules her dreams. And when the nights get dark enough, she still craves him. Though his essence courses through her body, she has found a true mate in someone else.


But when a dangerous enemy threatens Bronwyn, only Lucian - bound to her forever by blood - can save her life. Even if it means sacrificing his own...


Eternal Captive is the third book in Laura Wright's, Mark of the Vampire series. Wright continues her series with another one of the Roman brothers, a member of vampire family with a lot of complicated relationships. Wright brings a real intensity to her writing and is a great voice in the paranormal romance genre. This series is something different in a genre that can sometimes be saturated with the same old thing. Yes, it's another vampire series. No, it is not predictable nor is it pretentious. This is easily one of my favorites of it's kind. It's unique and original.


I have liked Lucian since the beginning of this series and I'll have to say that I was particularly excited to read his story. Luca is a smart-ass. He's sarcastic, a little bit abrasive and somewhat full of himself. I like his bad-boy swagger and his alpha male mentality. He is an albino which adds to his allure and he has a limited amount of time before he becomes a monster... unless Bronwyn can help him. I just loved the way that Wright writes this character. He has these desires that are both good and bad, but he isn't really fighting with himself, he's attempting to deal with them. I liked the fact that he was brassy and hard nosed. Great character development.


Bronwyn was a little harder for me to gauge. But I can understand why she would not want to be attracted to a Breeding Male. He will eventually have nothing more on his mind that killing and will have to be caged. Who would want to love someone like that? Yet, she does! But, she doesn't give up on Luca. She is constantly trying to change the inevitable for him. The attraction between them is intense and heartfelt. I felt sorry for the man she decided to take as a mate, because he could not hold a candle to Luca. But, I do believe Synjon with eventually get his own story.


This is just a great series. I can't recommend it enough. The writing is strong. The world-building and mythology which is so important in paranormal romance is interesting and not your hum-drum average vampire world. I think Wright was really on to something with this series and these characters. I loved her character development and I felt like she took time to give her cast personalities and feelings and situations of their own. Not every thread ends within each book, but they can easily be read as stand- alone's which is always a plus.


If you are looking for something different in a vampire book, this is probably it. Wright does a masterful job with her vampires and makes the reader feel like they've just read something that a little more meaningful than another Twilight knock off. I loved it... and I think you will too!

Eternal Captive is available NOW from your favorite bookseller.

Laura Wright is passionate about romantic fiction. Though she has spent most of her life immersed in acting, singing, and competitive ballroom dancing, when she found the world of writing and books and endless cups of coffee, she knew she was home. Laura lives in Los Angeles with her husband, two young children, and three lovable dogs.
Posted by justpeachy36 at 10:30 AM