Review: Murder in a Basket

(Received for an honest review from the author) 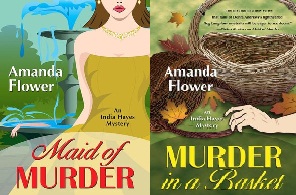 
College librarian and struggling artist India Hayes isn't sure how her older sister Carmen talked her into managing a face-painting booth at the Stripling Ohio, Founders' Day Festival or how Carmen convinced her to wear the pink gingham pioneer dress, including mobcap and granny boots, but that's where she finds herself in a chilly October just before Halloween.


India's annoyance turns to suspicion as she discovers the body of Zen-like basket weaver, Tess Ross, on the festival grounds. Tess leaves behind an angry blacksmith husband, a confused adopted son, greedy siblings, a dysfunctional artists' co-op, and a chocolate-colored labradoodle with a two-million-dollar trust in his name.


Much to India's dismay, she learns Tess is the sister of her stuffy college provost, Samuel Lepcheck, and the mother of a library student worker, Derek, who has an irrepressible crush on India that she's dong her best to ignore. Derek begs India to investigate his mother's murder.


Despite the urgings of handsome Police Detective Rick Mains to stay out of the investigation, India agrees to Derek's request and finds herself playing sleuth as well as foster-owner to Zacchaeus, the two-million-dollar labradoodle.


With her own eccentric family commenting from the sidelines and her Irish-centric landlady, Ina Carroll, as volunteer sidekick, India must discover the truth before she has a permanent canine houseguest or she ends up the next victim in the basket weaver's murder.


Author Amanda Flower brings readers the second India Hayes book, Murder in a Basket. Readers who have read Flower's book Maid of Murder will happily return to the scene of the crime for another great cozy mystery. Flower does an amazing job with character development and plotting in this one. Her quirky, unorthodox heroine is sure to strike a cord with many different types of readers. Set in Ohio this is a cozy with lots of local flavor and some very tense moments. Cozy readers are sure to love it!

I wasn't really sure what to expect with this one since I hadn't read the first book in the series. There were a few references here and there to things that must have happened before, but not enough to turn me off. This was an amazingly light and humorous book, that just happened to be about a murder. There were times when I laughed out loud and India's antics and times when the action was so intense, I was biting my nails. Flower balanced the serious subject of murder with a lot of comic relief and that was very appealing.

The characters in this one was so fun to read about. India, the heroine is an eclectic mix of smarts and creativity. Her job as a college librarian showed her intelligence, while her side career as an artist showed her to be a visionary. The amateur sleuth side to her personality is enhanced by these other characteristics. She was certainly a hand full. Readers will love her thought process as she puzzles out the crime and brings them along for the ride. I liked the way she and Detective Mains kind of squared off with each other, both attracted but both wanting to solve this crime before the other. I liked that tension it created in the air.

India has some great cohorts as well in this one. The offbeat staff and patrons of the library including the murder victims son and her outlandish parents, as well as very Irish neighbor. I loved India's family they added another dimension to the story, giving India more than just a case to solve. I love the way Flower instills the everyday happenings in India's family into the story. Her parents are activists and their crusades were comical, yet endearing. I was sad when the book ended and wanted to know more about everyone.

The mystery aspect of the book was engaging and kept my attention throughout. I figured it out, but it was close to end before everything fell into place for me. I kept thinking it was someone else, and couldn't get that out of my head until I was almost stumped, LOL! It's a rare thing, but it does happen... I liked the way Flower threw in some red herrings and the ending was quite surprising for a lot of reasons, and will only whet the readers appetite for more of India and the gang. Looking forward to the next book in this very realistic and enjoyable series!


Murder in a Basket is available NOW from your favorite bookseller. 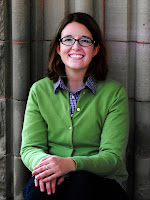 Amanda Flower, the author of Agatha Award-nominated Maid of Honor, the first in the India Hayes Mystery series, is an academic librarian for a small college in northeastern Ohio. When she is not at the library or writing her next mystery, she is an avid traveler, aspiring to visit as much of the globe as she can. Recent trips have taken her to Jordan and Great Britain. She lives and writes near Akron with her family and two mischievous cats, one of whom looks suspiciously like Theodore from her series.