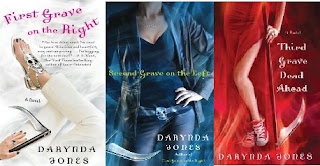 Excerpt from Third Grave Dead Ahead


Paranormal private eye. Grim reaper extraordinaire. Whatever. Charley Davidson is back! And she's drinking copious amounts of caffeine to stay awake because, every time she closes her eyes, she sees him: Reyes Farrow, the part-human, part-supermodel son of Satan. Yes, she did imprison him for all eternity, but come on. How is she supposed to solve a missing persons case, deal with an ego-driven doctor, calm her curmudgeonly dad, and take on a motorcycle gang hellbent on murder when the devil's son just won't give up?

The third book in the Charley Davidson urban fantasy series, Third Grave Dead Ahead by Darynda Jones is a barrel of laughs mixed with some intense action. Jones' trademark humor makes this series a must read for urban fantasy readers who like a good laugh with their suspense. Jones gives readers some of the most entertaining characters to come along in a long while. Her series is unique and innovative, in a genre that can sometimes repeat itself.

This was my first experience with Darynda Jones and I will have to say it was an enjoyable one. Though I probably would have liked it even better had I read the first two books in the series beforehand. It was slightly hard to follow because I was unfamiliar with some of the previous events, but I still really liked it, so that's a big plus.

Jones has an off-the-wall sense of humor that is evident in this entire book. Her characters are zany and off beat. Charley finds herself in one mess after another it seems and the secondary characters also provide a lot of comic relief. Most urban fantasy is dark, gritty and kind of somber to some extent, but Jones proves that you can write good urban fantasy and still have a few laughs to lighten the mood. There were times when I was laughing out loud and times when I was biting my nails. Jones showed very good balance in her writing and used humor to her advantage.

Charley Davidson is a private investigator but she's also a Grim Reaper. I though the idea was original and very well thought out. Charley comes across as a fly by the seat of your pants kind of gal. She's off the cuff, a bit irreverent and finds herself in some serious chaos in this book. She has the son of Satan on her mind constantly, she's trying to keep a motorcycle gang under control and solve a missing person's case. She's got a lot on her plate and I thought she handled it with style. She was a great character and Jones gives her some great friends, a comical family and love interest that was out of this world.

This was such a fun book. I can't wait to go back and read the other two and anxiously await the fourth book in the series. Jones ties up a few threads but she leaves enough questions unanswered to get the reader's hook baited for the next one. I recommend this one to urban fantasy readers who are looking for something new. Urban fantasy can tend to be repetitive after awhile and this was a refreshing change.


Third Grave Dead Ahead is available NOW from your favorite bookseller. 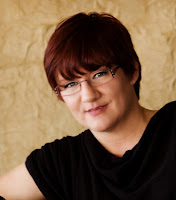 Darynda Jones is the winner of the 2009 Golden Heart for Best Paranormal Romance for her first manuscript First Grave on the Right. Darynda can't remember a time when she wasn't putting pen to paper. She lives in New Mexico, with her husband of more than 25 years and two beautiful sons, aka the Mighty, Mighty Jones Boys.

Third Grave Dead sounds a bit too paranormal for me. However, your review of this book as well as all of the others is superbly written. I have been meaning to make this comment for awhile. I am offended that Blogger considers your blog to be "adult" content. Sexy book covers and paranormal books do not make it X rated.