(Received for an honest review from St. Martin's Griffin)


Excerpt from A Little Night Magic


Can a small-town waffle-house waitress save the world from evil? Anything's possible in this irresistible new series that's deliciously witty, delightfully sexy, and hot off the griddle...


Olivia Kiskey has lived in the same town, with the same job, and the same crush for years. She needs a change - and she gets it - when a mysterious customer asks, "Do you believe in magic?' The next thing she knows she's on the front lines of a mystical war, navigating her way between good and evil, day magic and night magic, love and waffles. But the waffles are really, really, really good.


Lucy March is no stranger to the publishing world. Her alter ego, Lani Diane Rich has written several books. A Little Night Magic is the first title under the Lucy March name and proved to be a sexy paranormal with some quirky small town characters that fans of the sub-genre will appreciate. A little magic always seems to make things better. March's ability to add humor into the mix helps to keep the story light and not bogged down by details.


Going into reading this book I was not quite sure what to expect. This being the first book of this kind the author has written. As many of you know I am a huge paranormal fan and I was hoping this new series would be a good fit for me, having perused some of Lani Diane Rich's other novels. I will have to say I was certainly not disappointed. This book has a lot of great selling points, two of which are the wonderful world-building skills that March employs and the eccentric and interesting characters she has developed.

Even from the blurb on the back of the book it's easy to see that this book isn't going to be your average paranormal. I loved everything about the world that March builds in this story. From the small town feel of Nodaway to Crazy Cousin Betty's Waffle house. It was light, fun and full of humor. Once the main character Olivia figures out that her life is changing in ways she isn't completely prepared for, the story is off and running. March is able to make the story comical yet still giving it that authentic and real feeling that makes readers start caring about the people and places they are reading about.


Olivia is such a great character. She's just been stuck in a rut sooo long that she has resorted to just about everything to get out of it. She decides to make some changes. She's in love with a co-worker who just doesn't seem to love her back. She's been slinging waffles for ages now and she wants to see new places and have adventures. I loved the fact that she's a little bit of a smart ass. She has some grit in her and when things start to get a little of control she rolls with it and finds her own happy ending.

The supporting cast including Tobias and the rest of the gang from Crazy Cousin Betty's, as well as Davina, the mysterious woman who lets Olivia in on the secrets of her past and her abilities, and Liv's other crazy, quirky friends are all well written and a lot of fun to read about. This isn't a very deep rooted plot that makes the reader think long and hard about the solution to whatever problem is going on. It's a light read that doesn't take a lot out of you. It's pure pleasure!

I loved it and look forward to see what's next for this crazy crew. I loved the way author uses the paranormal as the base of the story but doesn't overwhelm the reader with it. The book is light but it still has some nail biting moments and the characters get into some very hairy situations. The mystical war that's going on right under their noses is quite a hook and I enjoyed seeing the differences between day and night magic. Quite a good start for a new series. There is a lot of potential here. Get started with the first book in a great new series. Don't you always like to catch them right at the beginning of something good?

A little Night Magic is available NOW from your favorite bookseller. 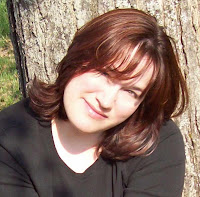 Lucy March is the award-winning author of several novels including EX and the Single Girl, Crazy in Love, A Little Ray of Sunshine, and Wish You Were Here. March is also a teacher, mother, and frequent podcast hostess who lives in southern Ohio.
Posted by justpeachy36 at 5:40 PM