Review: The Lord of Illusion

The Lord of Illusion (Elven Lords - Book 3) by Kathryne Kennedy 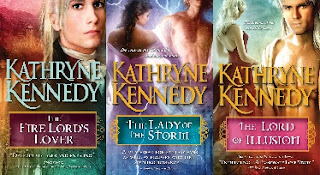 Excerpt from The Lord of Illusion


Rebel Lord Drystan Hawkes dreams of fighting for England's freedom. He gets his chance when he finds a clue to opening the magic portal to Elfhame, and he must race to find the slave girl who holds the key to the mystery. But even as Drystan rescues Camille Ashton from the palace of Lord Roden, it becomes unclear exactly who is saving whom...


FOR THE FATE OF HUMANKIND LIES WITH CAMILLE...


Enslaved for years in a realm where illusion and glamour reign, Camille has learned to trust nothing and no one. But she's truly spellbound when she meets Drystan, a man different from any she's ever known, and the force of their passion may yet be strong enough to banish the elven lords from the world forever...


The final book in the Elven Lord's series, The Lord of Illusion is everything readers want in the conclusion of a series. Kathryne Kennedy ties up all the loose ends and brings every story thread together for a climatic battle that will free England form the tyranny of the Elven Lords. Kennedy's world-building is unparalleled in the fantasy genre and her plotting is amazing. This is a book any romantic fantasy fan would be thrilled to read. Don't miss it!


I have loved this series from the beginning. Kathryne Kennedy has taken England as we know it and turned it on it's ear. It's a world under the control of some very maniacal and somewhat terrifying Fey. I loved the fact that Kennedy plays on the legends of the Sidhe, but also puts her own spin on it to give readers a very unique and interesting world. The seven realms were the stuff of legends themselves. It takes a keen intellect and a unfettered imagination to come up with something like that and Kennedy proves she has both.

The last book in the series, The Lord of Illusion is the culmination of everything the Rebellion has worked for. The overall story arc throughout the series has been the freedom of England from the Elven Lord's and Kennedy certainly doesn't disappoint. The action in this book alone is enough to make it worth the read, but the author adds so much more than just a final battle between good and evil. Though that is a great premise, the relationship between hero and heroine in The Lord of Illusion is just as powerful as the battles that take place.


Drystan Hawkes is a very unexpected hero. He is bookish, an academic and tends to be the odd man out when it comes to friends and acquaintances. He just doesn't fit in. He gives off a quiet confidence, but he certainly isn't one most people would consider a hero. That's what makes Kennedy writing about him so amazing. She can turn even the most ordinary of people into something more and she does that masterfully in this book with both Drystan and Camille.

Camille is every bit the tortured heroine. She is wise beyond her years and shows a strength that is profound. She has had a life riddled with abuse in just about every form imaginable. She has learned that she can't trust anyone and she only has herself to rely on, but she survives and she continues to press on. Her resilience was amazing and I loved seeing her character develop. She is almost like a flower that slowly begins to bloom. Tentative and scared almost, but still willing to risk. Not only is she seeking freedom for herself, but she may well be the key to the freedom of England itself.

This was such an amazing book. I admit that the Fire Lord's Lover is still my favorite, but I think that's because it introduced me to this magical world. But The Lord of Illusion is absolutely amazing. It wraps up the series in a good fashion. It leaves readers on a hopeful note and proves that good can outwit and win against evil. In a word is was superb and if you love romantic fantasy, you can't afford to miss this book or this series!


The Lord of Illusion is available NOW from your favorite bookseller. 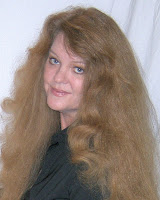 Kathryne Kennedy is an award-winning author acclaimed for her world building and known for blending genres to create groundbreaking stories. The Lord of Illusion is the third book in her magical new series, The Elven Lords, following The Fire Lord's Lover and The Lady of the Storm. She's lived in Guam, Okinawa, and several states in the United States, and currently lives in Arizona with her wonderful family - which includes two very tiny Chihuahuas. She loves to hear from readers, and welcomes you to visit her website.
Posted by justpeachy36 at 10:30 AM

Wonderful review. I love it when a series ties up everything and has the perfect ending! I can't wait to check it out!