(Received for an honest review from NAL)

Excerpt from Almost Everything


WHO EVER SAID VACATIONS WERE RELAXING?

To say half-vampire, half-witch Ana Parker has boy trouble is putting it lightly - something to which her text-messaging bill can attest. Her rocker ex-boyfriend is trying to heat things up again, and high school hockey star Matthew wants her to try out with him for the Renaissance Festival. At least her sort-of boyfriend, Elias, isn't hounding her cell - considering the vampire knight is currently living in her basement.


Ever since her father banished Elias and Ana from the court of the Northern vampires, Ana has been trying to live a normal life. But when the prince of the Southern Region vampires informs Ana that they're on the brink of war and she accidentally offers up Elias as a peace offering, the princess knows that she's going to need some help to get out of the situation.

With Ana's boy-drama meter hitting an all-time high, summer in St. Paul is heating up for all the wrong reasons...


Almost Everything is the final book in the Vampire Princess of St. Paul series by Tate Hallaway. This fast-paced, YA paranormal is perfect for both the young and old. Hallaway's ability to write young adult characters is flawless and her sense of teenage behavior is spot on. Readers who enjoy smart, witty heroines and sexy heroes will love this one.

As many of you know, I don't usually review much YA fiction. There are several reasons for that. I am not a fan of what I call "regular" YA. It's a bit too mundane for me usually, but I do read paranormal YA novels for pleasure on occasion. The Vampire Princess series, is so well written it has to be among my favorites in the genre. Hallaway has  areal knack for writing about young adult life, while still giving her books the punch of a great paranormal tale.


Ana is a great heroine. She has spunk, charm and a good head on her shoulders. She doesn't let the hype of being a vampire princess give her airs and she is very down to earth and easy to like. Hallaway seems to be channeling her inner teen with this character. Her ideas and reactions are realistic and believable. Young adult readers could easily relate, while adult YA readers will look back fondly on their own experiences at Ana's age.

I got to tell you though, Ana has some major boyfriend issues in this one. I know she's a half-vampire, but it seems every boy in school and out has the hots for her. While that is kind of funny and all three male lead characters are amazing in their own right, it's a little bit of overkill for my tastes. A love triangle... hot! A love square... not so much.


The three men/boys in Ana's life each bring something different to the table. You've got the bad boy rocker, the All-American athlete and actor and the very dark and gritty vampire prince. Each one has his own merits and his own place in the story. Hallaway does a fantastic job with each complex, multi-faceted character, but I'm not sure they all had to be love interests. But that really didn't take that much away from the story. It was a remarkable read in every sense of the word.

I loved the whole idea of the vampire politics that Ana was learning to deal with and how she learned a hard lesson. Every choice she makes seems to have far reaching consequences and she finds herself somewhat out of her element but not overwhelmed. She makes a few mistakes along the way and that's what makes her so much fun to read about. What is she going to get into next?


I have had the privilege to review all three books in this series and can find very little to criticize in any way. Beyond the plethora of boys sniffing at Ana's heels. I liked the characters, the pacing, the whole witch-vampire dynamic and so much more. If I had to recommend a YA paranormal series, The Vampire Princess of St. Paul would have to be it! Great writing, engaging characters and a teenage voice that unparalleled in the the genre. Nice job!


Almost Everything is available NOW from your favorite bookseller. 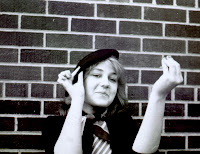 Tate Hallaway lives in St. Paul, Minnesota and is also the author of the Garnet Lacy novels.
Posted by justpeachy36 at 10:30 AM