Void City's resident badass vampire has a secret to keep, everything to lose, and a plan to win it all. Eric has taken control of the city's supernatural hierarchy, putting all the deals and contracts that allow Void City to function up for renegotiation. When he installs his insane vampire daughter, Greta, as Void City's sheriff of the supernatural, bloody mayhem ensues. To further complicate things, the love of Eric's life is back from the dead, immortally young, at a cost that has put Eric under the thumb of a very powerful demon. The mysterious mouser Talbot, morose mage Magbidion, and al of Eric's thralls are tying to help him keep things under control... But with early onset Alzheimer's, vampire hunters, demons, a band of chupacabra, a cursed cousin with a serious grudge, and Rachel as his new "handler"... there's just not an app for that.


Burned is the fourth novel in J.F. Lewis' Void City, urban fantasy series. This book has supernatural characters a plenty and Lewis uses his trademark humor and wit from beginning to end. Lewis has a real knack for character development and readers will be swept away by Eric and his cohorts. This is a fast-paced novel that roars out of the gate and doesn't let up til the last page.

I am not sure why I've never read this series before, but I was certainly missing out. Void City is a remarkable place that J.F. Lewis has created. His setting and characters are so believable that their "eccentricities" make them seem more human than most of my neighbors. These are the kind of paranormal characters you want to meet and get to know, well maybe not Greta, but the rest, for sure. Lewis' characters have everyday problems like Alzheimer's and petty squabbles over control, but they handle them in a very urban fantasy like way... murder and mayhem abound!

Greta is...  well to put it mildly, a few fries short of a happy meal. Not somebody you want to meet in a dark alley! But I loved her just the same. Like all of Lewis' characters including the anti-hero Eric, Greta is mulch-faceted and full of really great one liners. Lewis' humor really shines in her character and the reader won't be able to help smiling at her antics. That's not to say she's not a badass character, cause let me tell you, she packs a wallop and when she takes over as sheriff her mantra is kill first and ask questions... well never!


Eric finds his life in a bit of turmoil. He has just taken over Void City and it's time to pay the piper in more ways than one. He may have bitten off more than he can chew, but he has a plan and it's time to make it happen. With Greta as sheriff, things start to come unglued a bit. His personal life is no better, as his true love has returned at a very heavy cost to Eric. His Alzheimer's tends to make him forgetful and he has to be careful not to forget to stay out of the sun among other things. Eric is definitely not your average hero. He's a vampire on a mission though and that's compelling in it's own way. I thought Lewis worked hard on this character, getting him just right and that attention really shows in the writing.

I haven't read the other books in this series, but if they are anything like this one they have to be good. I didn't have any problem picking up the action and understanding the plot, but I always think it's a good idea to start at the beginning of a series. So when readers go out to buy Burned, they'll just have to pick up the other three as well. I think it would be even more amazing to see how Eric has changed throughout the series. Lewis obviously has a knack for both world-building and characterization.


I recommend this one to urban fantasy readers who want a book with humor and zest. Sometimes urban fantasy can get a little bogged down by the gritty writing the sub-genre is known for, but it's nice when an author can channel both the dark and the light. J.F. Lewis has a great series here and I look forward to exploring the other books he has written. This isn't one you want to miss... pick it up today!


Burned is available NOW from your favorite bookseller. 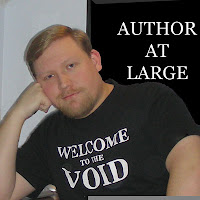 J.F. Lewis lives in Birmingham, Alabama with his patient wife, two adorable sons, and a crazed canine. He decided that he wanted to be a writer when a supposed creative writing teacher questioned his sanity and suggested therapy. Staked was his first novel (and it also got him excommunicated). The Void City series continues in ReVamped, Crossed, and Burned (coming February 2012).

An avid reader, Jeremy also enjoys sushi, popcorn, lukewarm sodas, and old black and white movies. His two favorite activities are singing lullabies to his kids at bedtime and typing into the wee hours of the morning. Fortunately, like the protagonist of his Void City novels, the author takes very little sleep.
Posted by justpeachy36 at 10:30 AM