You Might As Well Die (Algonquin Round Table Mystery - Book 2) by J.J. Murphy


(Received for an honest review from Obsidian Mystery) 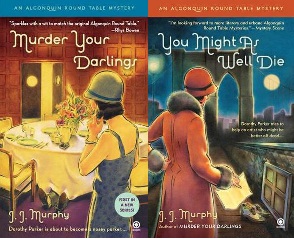 
One must be careful never to pick up a stray piece of paper at the Algonquin Round Table - it might be the check. But when second-rate illustrator Ernie MacGuffin slips Dorothy Parker an envelope, she's none the wiser. Only later does she discover it's a suicide note.


It seems MacGuffin has leaped to a watery death from the Brooklyn Bridge. Days later, his artistic works have tripled in value, and he's become so renowned that Harold Ross at the fledgling magazine The New Yorker wants Robert Benchley to writer a profile on him.

Something smells fishy to Dorothy, though, so she enlists magician and skeptic Harry Houdini to accompany her to a seance being held by self-proclaimed clairvoyant Viola Sweet. There the ghostly voice of Ernie MacGuffin seems hauntingly real - almost as if he could reach out and grab them...

J.J. Murphy's second Algonquin Round Table Mystery, You Might As Well Die is an amazing mix of historical fiction, real life characters and devilishly good wit. Murphy's mysteries are full of historical figures readers have read and know about including the intrepid Dorothy Parker, a prolific writer, poet and critic in the 1920's. This book even boasts a guest appearance by renowned escape artist Harry Houdini. Don't you love it when history and mystery mix?

“Razors pain you; Rivers are damp; Acids stain you; And drugs cause cramp. Guns aren’t lawful; Nooses give; Gas smells awful; You might as well live.”


Let me start off by saying... I absolutely love Dorothy Parker and I did long before I read J.J. Murphy's first book in the Algonquin Round Table series, Murder Your Darlings. Parker was a writer after my own heart, with a wit that was sharp and yet sanguine. She uttered or wrote some of my most favorite sayings and I loved the fact that Murphy decided to write a series that featured such an icon for women's writing. I think Murphy does Dorothy Parker justice in this series. Her wit and personality shine in a way that I wouldn't have imagined possible and I applaud Murphy for going in this direction. Murphy's depiction of Parker is spot on in my book!


The combination of historical figures and mystery isn't a new idea, but Murphy takes it to new heights in this series. Using the writers and journalists of the 1920's to create an atmosphere that many books of this nature are missing. It's almost as if Murphy has somehow gotten a hold of time machine and transports the reader back to New York during this turbulent time period. Prohibition is in full swing and there weren't too many female journalists or amateur sleuths.

Some readers may not be familiar with the background of this series. The Algonquin Hotel in New York was host to what became known as "The Round Table", a group of journalist that met daily to share lunch and news and in this case clues. Murphy uses this bunch of real life journalist as the core group of characters in this series and takes them on all kinds of wild rides as they ferret out clues and find the killers. What's amazing to me as a reader is the amount of research the author had to do just to get the personalities of these people anywhere close to what they might have been like. I love the wit and humor that Murphy gives Dorothy Parker and Benchley. It just imbues the book with lively banter despite the seriousness of the subject matter.


You Might As Well Die is the second in the series and Murphy continues to expand on Dorothy and her cohorts. Their personalities and ideas are just really starting to come to light and I think the author did a great job balancing the character development with the mystery aspect of the book. I liked the overall premise, a second-rate artist commits suicide and triples of value of his work (or so it seems). He slips Dorothy his suicide note before he takes a plunge off the Brooklyn Bridge, giving her ample reason to investigate. The clues were not difficult to interpret and I had a good idea whodunit before the end, but that certainly didn't take away from the journey. This was such a good book. I loved the appearance of Harry Houdini and I hear that Sir Arthur Conan Doyle will guest in the third book in the series due out in 2012. I really like this mixing of history and mystery. This is fast becoming one of my favorite types of cozy mysteries.


I recommend this one to cozy mystery fans and to the reader who has a penchant for history or journalism and especially to those of you who have an appreciation for Dorothy Parker...


“This is not a novel to be tossed aside lightly. It should be thrown with great force.” - Dorothy Parker

You Might AS Well Die is available NOW from your favorite bookseller.

J.J. Murphy grew up as the child of a circus performers. But life under the big top was monotonous and dreary for an inquisitive youth. So one night J.J. ran away from the dull and dismal circus to join the thrilling, razzmatazz world of business-to-business trade publishing. After a highly lucrative and award-winning career in corporate journalism, J.J. sought a totally new challenge: writing the sayings in fortune cookies. Soon by piecing together thousands of these random sayings, J.J. realized that this collection was actually a (somewhat) coherent novel - the first Algonquin Round Table Mystery - and had serendipitously embarked on a new career!

The publisher is sponsoring a giveaway for one copy of You Might As Well Die by J.J. Murphy.


~ You must be a GFC follower or E-mail Subscriber to participate.
~ US addresses only (publisher request).
~ The deadline to enter this giveaway is Midnight EST January 11th.

1. Please leave a comment or question for the author on THIS post.
2. Please fill out the FORM.
Posted by justpeachy36 at 12:00 PM

Great review, you caught my interest in this series.

I just bought both books in this series so I'm glad you liked them! Now I can't wait to read them!

Read the first one, thoroughly enjoyed it. Love to win the second one. Thanks for the chance.

Thanks for the great review. It sounds like she really did a lot of research before she started writing this series. I think I will like it.

This series sounds like great fun! Thanks for an amazing review.
kpbarnett1941[at]aol.com

I do love it when history and mystery mix! I would love to read this.

Thanks for the giveaway. I would love to read this book. Tore923@aol.com

This sounds wonderful! Thanks for the chance to win!

Great review. Sounds like a wonderful cozy mystery. I know I would enjoy reading it. Thanks!

A great review. I will have to add this series to my TBR.

I'm really excited about this book...I love mysteries and the 1920s!
birthdaywish at gmail dot com

OMG!! This sounds like such an awesome series! Thanks SO much for bringing it to my attention, and for having such a great giveaway:)

Great review with lots of research done for the book. Love the series- gotta have them
amhengst at verizon dot net

I'm really starting to get into cozies and am looking for new books and these sound fantastic! Thanks for the awesome giveaway.

I wish there were more historical cozies available. Look forward to checking this one out. Thanks for the giveaway.

I have always loved Dorothy Parker so I am guaranteed to love this book.

i recently read the 1st book in this series & i can't wait to read the next one!!

Can't wait to read this series J.J.! I love mysteries and history!

This books sounds very interesting. Congratulations on the book!

I would love to read this book—thanks for the review!

A mystery with Dorothy Parker should be lots of fun.
farrell@crosslake.net

I enjoyed Murder Your Darling and I am anxious to read this one!