CoverArt: Click on the picture to see a larger, clearer image of the covers in this series. 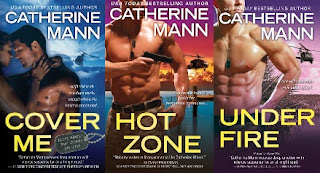 Excerpt from Hot Zone (Scroll down a bit)


For Pararescueman Master Sergeant Hugh Franco, it's all about saving other people's lives. Then he moves on. But when he pulls beautiful Amelia Bailey and her adopted nephew from the rubble of a catastrophic earthquake, he finds himself entangled in their lives in ways he cold never have imagined...


Amelia's trip to the Bahamas to hep with an international adoption has been no vacation, but the hardest part is yet to come. As Amelia and Hugh are pulled unawares into a deadly smuggling scheme, simmering beneath them growing need to protect each other is a compelling attraction they're both determined to deny...


Hot Zone is the second book in Catherine Mann's military romantic suspense "Elite Forces" series. After reading and reviewing the first book in the series Cover Me, I was excited to see Mann take readers from the frozen north to a totally different local with this one. Readers who read the first book will be thrilled that Hugh gets his own story! This is series that will appeal to women who find men in uniform both brave and sexy. The PJ's (pararescue jumpers) are exemplary serviceman and I think Mann truly shows the strength and loyalty they possess in this book. "That Other's May Live!" is a worthy motto!


There are a lot of good things about this book. It is obvious having her own military expert "in house" has helped Catherine Mann's book to attain an authenticity and resonance with the military community that many military suspense writers never seem to get. Her descriptions and details are realistic and riveting. I loved the video link that Catherine provided with her guest post that shows the PJ's in action. I think her writing really personifies what these men are all about and it makes her books ring true, where others fall short.


It was nice to see a big bad alpha male, show his vulnerable side and Mann's depiction of Hugh Franco was spot on. Here's a man who has spent his life protecting and serving others, yet his own world is crumbling around him. The death of this wife and child has obviously taken a huge toll on this character and it was amazing to see him return to life, so to speak, as he begins to explore his feelings for not only Amelia, but children, through contact with Joshua and the orphans. I think Mann did a fantastic job of making Hugh full of contradictions. His grief is still very close to the surface in this book and it was emotionally gripping to watch the story unfold. He wants connection, but then again he doesn't want to risk losing someone again. He desires to protect and rescue people, yet he puts himself in harms way, essentially driving himself toward his own death. It's really interesting to see how he resolves his issues.


Amelia is also a very strong character, though a bit out of her element during the aftermath of this horrible earthquake. I liked the fact that Mann chose to put two strong and dynamic characters together. Often times when that happens I think one of the characters tends to suffer, but Mann pulled it off with these two, providing some very intense and passionate moments and some moments where they stood toe to toe with each other. It was a nice contrast to most romance novel patterns. As couple these two really worked. There was also a couple of other romantic relationships in this novel. Amelia's brother and sister-in-law, and Hugh's commanding officer Liam has a budding romance in the works. All three situations were not all resolved in this one, so I see potential for at least one of them to spill over into the next book.


The action and suspense in Hot Zone was truly amazing! First the earthquake, then the aftermath, issues with human trafficking and some really bad, bad guys. There was a lot going on in this one to keep the reader entranced and glued to the pages. The romantic aspect, was almost a breather from the intensity of the plot. I liked the fast pace and gritty, edgy feel to what was going on. I thought Mann did a remarkable job of giving readers who expect a punch in their military romance, just the right amount of adventure and heart pounding action, while giving her romance fans a passionate and emotionally fulfilling love story. It's a great ride, you won't want to miss it!

Hot Zone is available NOW from your favorite bookseller. 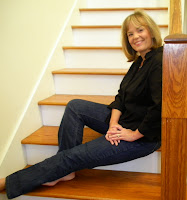 Catherine Mann's military romances have sold over 2 million copies and have been on the USA Today and WaldenBooks bestsellers lists. She has won the RITA and Bookseller's Best Award, and finaled in many other prestigious contests. Her husband is an Air Force colonel and they live near Pensacola, Florida.