The Thirteen Hallows by Michael Scott and Colette Freedman

Excerpt from The Thirteen Hallows (Amazon Look Inside Feature)

The Hallows: Ancient artifacts inbued with a primal and deadly power. But are they protectors of this world, or the keys to its destruction?

A gruesome murder in London reveals a sinister plot to uncover a two-thousand-year-old secret.

For decades, the Keepers guarded these Hallows, keeping them safe, hidden, and apart from one another. But now the Keepers are being brutally murdered, their prizes stolen, the ancient objects bathed in their blood.

Now, only a few remain.

With her dying breath, one of the Keepers convinces Sarah Miller, a virtual stranger, to deliver her Hallow - a broken sword, with devastating powers - to her nephew, Owen.

The duo quickly become suspects in a series of murders as they are chased by both the police and the sadistic, Dark Man and his nubile mistress.

As Sarah and Owen search for the surviving Keepers, they unravel a deadly secret the Keepers were charged to protect. The mystery leads Sarah and Owen on a cat-and-mouse chase through England and Wales - and history itself - as they discover that the sword may be the only thing standing between the world... and a horror beyond imagining.

The Thirteen Hallows is the beginning of a spellbinding new saga, a thrilling tale of ancient magic and modern times by a New York Times bestselling author and an award-winning playwright.

The Thirteen Hallows is the first book in a new series from author Michael Scott and playwright Colette Freedman. Both are seasoned professionals and it shows in the depth and creativity of this book. Michael Scott's young adult series, The Secrets of the Immortal Nicholas Flamel has earned him great accolades as a storyteller which is evident in every page of this book, while Colette Freedman's background in theatre and film serves The Thirteen Hallows well by giving it an almost movie-like feel to it.


So many adults are reading YA fiction today because of the astute storytelling and the fact that YA writers are coming up such incredible ideas. I was extremely excited to find out that The Thirteen Hallows was for the adult market. Though Michael Scott is known as a YA writer and this may cause some confusion this book is labeled as horror/fantasy. There should not be any question as to the audience. I don't think it outside the box to think that a YA writer would or could not write adult fiction because clearly in this situation that is not the case. Micheal Scott and Colette Freedman are giving adult readers what they crave from YA paranormal writing, but they are giving it to them through experienced and world weary characters. This isn't your teenagers version of the life and that's what I liked most about this one.


It's easy to see why Michael Scott is considered and authority on mythology. This book is absolutely full of it and I found it incredibly interesting. I first heard about "hallows" or objects that are considered to have power from the Harry Potter series, clearly YA, and I loved the fact that Scott and Freedman were about to translate that to an adult version. The hallows described in The Thirteen Hallows each contains a measure of power, but when brought together that power is magnified and carries with it the risk of destroying everyone and everything around them.

The whole idea of the Keepers and how they were tasked to protect not only these ancient objects but the secrets surrounding them was riveting and I found it really hard not to think about this book when I wasn't reading... a rare thing when you consider how many books I read in a given month. The main characters Sarah and Owen were complex and had personalities that were compelling and interesting. I liked the fact that Sarah's well ordered British world gets turned on it's ear. I liked that she was an adult with adult problems and issues. I liked that Owen was attracted to her and how he wanted to protect and take care of these historical objects. He saw the power in them and in himself.


As I noted before this an adult book, there is sex, there is tons of action, a blistering pace and there is violence, hence the horror label. Not just a little bit of violence. This one isn't for the faint of heart! It might make you a little queasy... it might make you light headed... it might even turn your stomach, it certain did mine, but it was worth it. This book as flashes of The da Vinci Code, it has moments that are reminiscent of historical fiction. It has the action and intensity of urban fantasy. There is so much going on here and most of it is absolutely fantastic. I love the idea that adults can experience that feel of a good YA book, but the complexity of an adult plot and characters. I am really looking forward to where this series might go.


I recommend it for readers who love history and artifacts, for those who love magic and mystery and if you love horror, this one is definitely for you. I don't recommend it for young adults. I think it's a little too much for them. But for me... it was darn near perfect. Who would have thought a top ten book of the year in the final week!
The Thirteen Hallows is available NOW from your favorite bookseller.
I'm giving this one 5 out of 5 apples from my book bag! 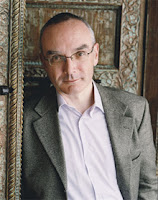 Michael Scott is an authority on mythology and folklore, and the author of the New York Times bestselling series, The Secrets of the Immortal Nicholas Flamel.

Colette Freedman is an award-winning, internationally produced play-wright.
Posted by justpeachy36 at 2:30 PM