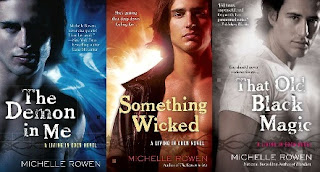 Excerpt from That Old Black Magic


When it comes to magic, sparks aren't the only thing that can ignite...


Reluctant witch Eden Riley knows that codependent relationships aren't good,  but it's hard to be independent when you're possessed by a sexy but troublemaking demon. Darrack's physical form makes good girl Eden want to go bad, but the constant itch to use the soul-destroying black magic she's recently acquired might force Eden to explore her dark side in an entirely different way.

When her dangerous magic starts manifesting itself without conscious effort, Darrack insists she seek outside help - which also leads them to the potential answer to ending the demon's curse. Suddenly everything starts spiraling completely out of control, threatening both her life and the possibility of a future with Darrack - since only one of them might be able to survive this...


That Old Black Magic is the catchy title to the third and final book in Michelle Rowen's Living in Eden series. Rowen's quirky characterizations and witty dialogue made this an enjoyable read that Urban fantasy and Paranormal romance fans won't want to miss. Darrack is one hot demon and Eden's black magic is getting a little out of control in this one. Rowen wraps up the series in true supernatural fashion!

Admittedly, I have not read the first two books in the Living in Eden series and that led me a funny assumption that I have to relate. When I first saw the name of the series, I assumed that Eden was a place and not a person... LOL! So, when I first started reading it and found out the error of my ways, I got a good laugh and I appreciated the authors sense of humor even more than I normally would have. This book has a lot of humor, and wit. The dialogue between Eden and Darrack, the demon who possesses her, is catchy and snappy. I liked the fact that Darrack cracked a ton of one-liners which allowed some comedic relief in an otherwise darker toned book.


I must be on somewhat of a demon kick, because several of the books I have reviewed of late have featured demons as the paranormal character of choice. I'm a big paranormal fan and for awhile there it seemed like just about every single paranormal book coming out featured a vampire and to some extent werewolves, but I've seen the tide start to shift a little bit toward other supernatural characters and apparently demons are the new "in" thing. The demon in Rowen's series definitely has some good points.

Darrick is sexy, he's kind of dark and he has a great sense of humor. The fact that he was cursed to possess the bodies of humans or else face a sort of netherworld called the Veil, was an interesting premise. The Veil being some place that is neither hell or heaven and thus probably waaaay boring! Then on top of all that he ends up possessing a woman he falls in love with. In order to release himself from the curse he may have to sacrifice Eden to do it. How's that for conflict? I like a book that has a very finely delineated path and this one certainly had that. Find a way to cure the curse, separate himself from Eden, keep her from using her black magic, and keep her alive.


I liked everything about the idea of the book, but I have to admit I was somewhat confused here and there because I didn't understand the history of the characters without having read the previous books. This is probably another series that is probably best read from the beginning. It will help to show not only the dynamic of Darrack and Eden's relationship, but also how Lucas (the would-be devil), Ben and Andy fit into the story. They are very well written secondary characters. Lucas could have his own story, he was quite an interesting fellow. Eden's deal with him is reminiscent of Faust or perhaps Charlie Daniels LOL!


For the most part I really liked this book and I fully intend to go back and catch the first two. This was my first experience with Michelle Rowen's writing and I found that I liked her voice very much. Her characters were interesting and full of life, even though they found themselves in some deadly situations. I wish Eden had been a bit more responsive. I didn't like her near as much as I did Darrack and I thought she took a little too long to realize she wanted him in her life in some form no matter what happened. But I suppose that led up to the deal with devil which was one of the best parts of the book, so I can't complain. Andy had me wavering back and forth between not liking him much to thinking he just had issues. I'm still on the fence. Ben was cool. He had some issues of his own to work out and I thought they fit nicely with the book.

I'm hoping for a spin off series that features Ben or Lucas. I think there are more stories to tell with this bunch and I'm hoping the author agrees. I recommend this to both paranormal romance and urban fantasy fans, there are elements of both genres in this one and something to satisfy them both. The book ended in a satisfying way and I'm assuming it tied up the loose ends of the series. I'm not the most informed reader on this one, so don't take my word for it... get a copy and see if you think my ideas on the book are sound... But it's most definitely worth your time!

That Old Black Magic is available NOW from your favorite bookseller. 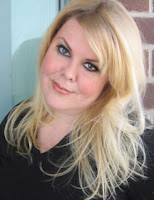 Michelle Rowen is afraid of monsters. She tries to conquer this fear by making the monsters - vampires, demons, and other creatures that go bump in the night - into handsome, protective, heroes. It seems to be working so far. Michelle writes Paranormal romance and young adult fantasy novels while remaining safely away from monsters in her Southern Ontario condo.
Posted by justpeachy36 at 3:00 PM