(Received for an honest review from Kensingston Zebra) 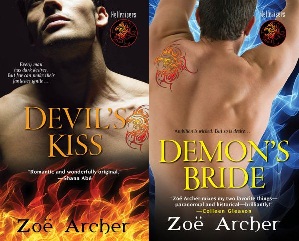 1762. James Sherbourne, Earl of Whitney, is a gambling man. Not for the money. But for the thrill, the danger - and the company: Whit has become one of the infamous Hellraisers, losing himself in the chase for adventure and pleasure with his four closest friends.

Which was how Whit found himself in a gypsy encampment, betting against a lovely Romani girl. Zora Grey's smoky voice and sharp tongue entrance Whit nearly as much as her clever hands - watching them handle cards inspires thoughts of another kind...
Zora can't explain her attraction to the careless blue-eyed Whit. She also can't stop him and his Hellraiser's from a fiendish curse: the power to grant their own hearts' desires, to chase their pleasures from the merely debauched to the truly diabolical. And if Zora can't save Whit, she still has to escape him.

The devil went down to Georgia. He was looking for a soul to steal... or in the case of Zoe Archer's latest book, he went down to Georgian England with same goal in mind! Devil's Kiss the first book in Archer's new Hellraisers series. It is what I would call a combination of two genres. It's either a paranormal historical or a historical paranormal, which ever floats your boat. Archer takes readers back to 1762, where she introduces them to five friends who engage the devil in a deal to get there deepest wishes fulfilled, but the cost may be too high.

I absolutely loved this book! I am a big fan of historical romance and an even bigger paranormal fan, so this one was right up my ally. Coming from a mixed background of Scottish and Cherokee influence, I've heard a lot of stories in my time. Storytelling being very prevalent in both cultures, so magic isn't really too far out of the scope of my imagination. And this book has a very mystical, magical feel to it. The fact the heroine is a gypsy probably helps with the whole enchanted vibe this book gives off.

The setting and atmosphere were perfectly described and it was easy to see that Archer took great care in bringing her hellraisers to life. I loved everything from the characterizations to the whole good vs. evil concept. Archer shows that you take the basic framework of good vs. evil and put a spin on it that makes it seem original and different. She makes this bargain seem plausible and the fact the devil chose these men who were so unconventional and who thwarted societies rules as his victims was genius!

Whit is a great leading man. He gets so close that edge of being someone a reader doesn't think can be redeemable and then he takes a step back. His treatment of Zora when they first meet is contemptible. But once he gets a grip their relationship is anything but normal. She is drawn to him every way, but she refuses to relenquish her heart until he gets himself out of this bargain with the devil. He is a gambler, a rogue and a rake. The devil gives him the ability to change the odds in whatever game he's playing including life and that has to be a great temptation for someone like him. I loved his attitude and is demeanor. He was just fantastic to read about.

Though Whit is a strong, formidable character, Zora is just as competent and determined as he is. She is a character that really sparked an interest in me. When I think of a Romani gypsy woman, Catherine Zeta Jones or Selma Hayek comes to mind, with their exotic beauty. She doesn't back down from Whit but meets him toe to toe. The passion between them in intense, but so is her love. She is determined get him out of this diabolical deal with the deal and she isn't one many people would want to go up against. I just loved her and thought Whit was the perfect compliment to her energy. Two strong leads, makes for an explosive relationship.

I can't say enough good things about this one. It was magical and heart pounding. The romance was well written and the paranormal elements abounded. I loved the combination of genres and I think this series has a lot of potential. Though this is the first book in the series, Archer was able to set it up and give readers a great story in the process. I'm looking forward to learning more about other Hellraisers and what they gained in the Faustian deal with the devil. I hope that Zora and Whit remain at the forefront of the series and can't wait to see what happens next! I recommend this one to both paranormal and historical romance readers.

Devil's Kiss is available NOW from your favorite bookseller.

I'm giving this one 5 out of 5 apples from your book bag!

Zoe Archer is an award-winning romance author who thinks there's nothing sexier than a man in tall boots and a waistcoat. As a child, she never dreamed about being the rescued princess, but wanted to kick butt right beside the hero. She now applies her master's degrees in Literature and Fiction to creating heroes in tall boots and butt-kicking heroines. Her "Blades of the Rose" series - featuring dashing men and fearless women - will be released Fall 2010. Zoe and her husband live in Los Angeles.
Posted by justpeachy36 at 3:00 PM